Advertisement
Home / Opinion / Let’s get real: The February 26 air strikes have not made India safer

There is no clarity in the establishment on the central question -- what should be our attitude towards Pakistan? 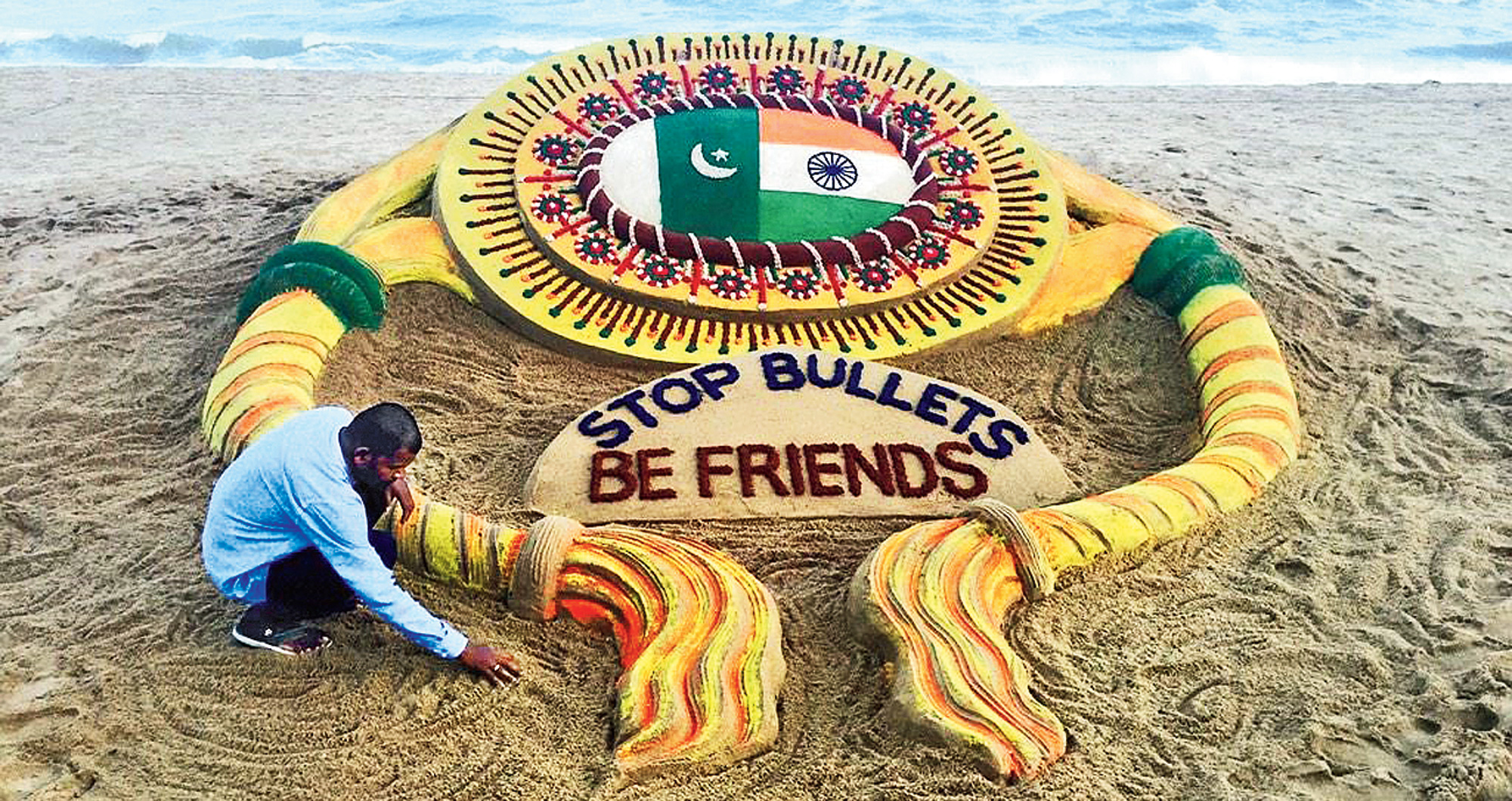 The Bharatiya Janata Party leader, B.S. Yeddyurappa, said out loud what every member of his party has been salivating about ever since the Indian Air Force carried out pre-dawn strikes on February 26 targeting a Jaish-e-Mohammad terror training camp in Balakot, deep inside Pakistan. The former Karnataka chief minister said the strikes had ensured that the BJP would win at least 22 of the 28 Lok Sabha seats in his home state.

Others have been less candid about the impact of the strikes on the BJP’s electoral fortunes in the upcoming general elections. But they — led by the prime minister himself — have not been shy of making full use of the strikes as evidence of the “New India” constructed over the last five years under Modi’s leadership.

The Opposition parties, particularly the Congress, unquestioningly supported the government’s decision and fulsomely commended the IAF action. But a statement by 21 Opposition parties criticizing the Modi government for “blatant politicization” of the sacrifices made by our security forces gave the prime minister just the opportunity he was looking for to attack them for not being patriotic enough.

In speech after speech over the last few days, Narendra Modi has taken credit for the new muscularity that allowed the strikes and in the same breath dismissed any criticism directed at him as an attack on India’s armed forces and on India itself. At a rally in Tamil Nadu on Friday, he said, “Modi will come and go. India will remain... In matters of defence and national security, we are Indians first and Indians only... politics can wait, it is the safety of our nation that is at stake.”

Let us take the prime minister’s word for it. Let us, for a moment, move away from the shrill war-mongering and mood of triumphalism fed by television studios and stop thinking about how it is going to help Modi at the hustings. Let us, instead, ask ourselves what exactly the air strikes and its aftermath mean for India as a country, for us as a people — what did they achieve, what do they signal, and what is the larger objective towards our sundered sibling and difficult neighbour, Pakistan?

According to the official statement on the air strikes read out by the foreign secretary, Vijay Gokhale, India had “credible intelligence” that the JeM was planning more suicide terror attacks in various parts of the country and “fidayeen jihadis” were being trained for the purpose. “In the face of imminent danger, a pre-emptive strike became absolutely necessary.”

India, therefore, struck the “biggest training camp of the JeM in Balakot” and in this operation “a very large number of JeM terrorists, trainers, senior commanders and groups of jihadis who were being trained for fidayeen action were eliminated.” Reporters were later told by “sources” that as many as 325 terrorists and 25 commanders had been killed in the strike.

Pakistan confirmed the strikes but insisted that there had been “no casualties or damage”. Western news agencies also claimed that there was no evidence on the ground that the strikes had killed hundreds of terrorists.

Since any scepticism on that score will be deemed an act of treason, let us accept the official version in toto. The air strikes, admittedly, were significant in themselves because Indian planes crossed the Line of Control into Pakistan for the first time since the war of 1971. It showed that the IAF was capable of making a swift strike inside Pakistan and returning home safely. That was cause for much celebration in India and seen as a just revenge for the attack on the CRPF convoy in Pulwama on February 14 that left 40 of its uniformed personnel dead.

But that satisfaction apart, what did the strikes actually achieve? Did they manage to destroy the terror infrastructure in Pakistan? Did they kill the “mastermind” of terror attacks? Will the death of 350-odd terrorists lead to more revenge attacks in India? Did the strikes make India safer? The lack of answers only adds to the sense of dread.

What followed the next day is more ominous. Unlike America or Israel which can get away with “taking out” terrorists from foreign lands with impunity, India’s “non-military pre-emptive action” against a terror camp met with quick retaliation from Pakistan. On February 27, Pakistani fighter aircraft crossed the LoC into India during the day and claimed that their “sole purpose was to demonstrate our right, will and capability for self-defence.” They also captured an Indian pilot who had ejected on the other side of the LoC after chasing off a Pakistani jet. Pakistan’s retaliation and the sight of Wing Commander Abhinandan Varthaman in their custody was enough to dampen the raging jingoistic fervour in India.

But not for long. The return of the pilot in less than 48 hours is now being portrayed as a triumph for Modi’s muscular nationalism and not as a peace gesture from Pakistan. “Abhinandan” is the new war cry in Modi’s campaign vocabulary because it is so much easier to make use of a returning “war hero” we have all seen on our TV screens unlike the 350-odd slain fidayeen.

Yet, the truth is that the events of February 26-27 have made India a lot more vulnerable. Having given up our self-imposed restraint of not crossing into Pakistan territory, any future terror attack in Kashmir or elsewhere in India will demand a similar response. But Pakistan’s retaliation has made it clear that unilateral strikes are not an option: they could trigger a war. And while war games in TV studios may give an adrenaline rush to a large section of our populace, an actual war can inflict human and material costs that we cannot even imagine.

That brings us to a central question: what should be our attitude towards Pakistan? There is no clarity within the Indian establishment on the matter. The dominant view today seems to be that a weak Pakistan — broken and bleeding — is in India’s best interests. The contrary view is that a peaceful Pakistan and peace with Pakistan are necessary for India’s own long-term growth and prosperity.

There is, no doubt, a great deal of anger against Pakistan-based terror groups that have repeatedly attacked India. This anger is directed not just at the terrorists but also at the Pakistani army and civilian leadership who are seen to be backing the terrorists and using them as part of their “proxy war” against India. And for the Hindutva forces now dominating India, all of Pakistan is an enemy that they wish to see destroyed.

But the anti-Pakistan sentiment is not confined to Modi’s support base alone. Many a non-bhakt too insists that no dialogue with Pakistan is possible because the country harbours a “visceral hatred” towards India.

The irony is that in recent days, it is Indian panellist in TV discussions who have been spewing venom against Pakistan while Pakistan’s prime minister, Imran Khan, has been sounding like a sane and reasonable statesman. Public utterances by public figures have a value of their own. So even while cynics accuse Imran Khan of doublespeak, his repeated appeals for peace and dialogue offer a striking contrast to India’s relentless vituperation and belligerence.

Sabre-rattling can take us to the brink of war that we cannot afford. It may help a leader win an election but it is not going to make the country any safer.

So let’s get real. We are not America or Israel — and should not desire to be either. India cannot finish off the terror infrastructure across the border without the cooperation of the Pakistani leaders and the Pakistani people — who have suffered more violence and killings at the hands of the terrorists than India has. Neither can India pretend that Kashmir has no special history and that the dispute will disappear if we abrogate Article 370.

The only solution is to start talking and keep talking — and not call off the dialogue process after a terror outrage, when we need it most. As thinking citizens of an avowedly mature and vibrant democracy, it is incumbent upon us to push our leaders to wage peace.

Modi will come and go. India will remain. So will Pakistan. It makes sense to be friends with neighbours.