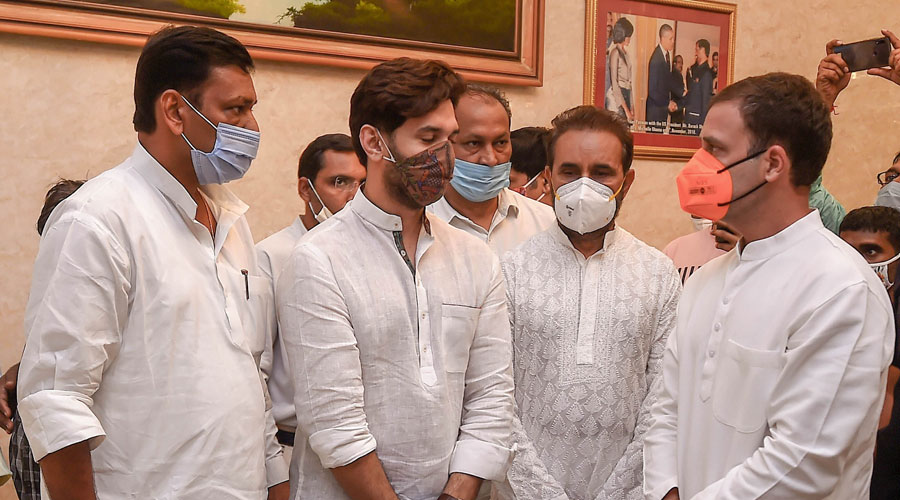 The letter has raised eyebrows in the political circles and speculation over its purpose because of the details hitherto unknown in the public as well as its timing.

The missive throws light on the reasons on why Chirag cannot patch up with Nitish and his Janata Dal United (JDU) despite the upcoming Assembly elections. Written on September 24, a day before the Bihar elections were announced, the letter points out that apart from the six Lok Sabha seats, a Rajya Sabha seat was promised to Ram Vilas during the seat-sharing deal for the 2019 general elections in the presence of then BJP president Amit Shah, Nitish and LJP leaders.

“However, Nitish refused to support Ram Vilas just before the Rajya Sabha polls and the latter was forced to go to his residence to placate him. Nitish’s behaviour was not appropriate when he (Ram Vilas) went to his house. The chief minister did not come to the nomination despite my father’s repeated requests. He came only after the muhurta (auspicious time) of nomination had passed. All these have led to much resentment among our leaders and workers,” Chirag said in the letter.

“Nitish even refused to acknowledge that my father was ill when mediapersons asked him a question on it. This was at a time when the President, the Prime Minister and top leaders cutting across party lines were concerned about his health and wished speedy recovery. The chief minister’s behaviour was insensitive,” he added.

Chirag accused Nitish of not consulting anybody from his party on the coronavirus pandemic, and not meeting, talking to him or replying to his letters despite seeking time to discuss the “Bihar first, Bihari first” campaign. He also asserted that the ruling NDA was still working on the agenda fixed by the Opposition Grand Alliance of which Nitish’s JDU was a partner earlier.

Chirag, who has been on the warpath with Nitish for the last few months and has refused to acknowledge the chief minister’s development schemes in Bihar, asserted that he refused to take in migrant workers returning from other states during the lockdown, and did nothing to alleviate the flood affected despite ruling for 15 years.

“There is a distinct wave against Nitish in the state. The BJP at present is capable of winning the elections on its own chief ministerial candidate. I am busy tending to my ill father and encouraging our party workers to ensure the victory of the NDA, but some JDU leaders are calling me Kalidas, middleman, and are threatening to break my nose and mouth during this difficult time for me,” Chirag said.

The LJP chief voiced full faith and dedication towards the BJP and Prime Minister Narendra Modi, but said “such words by some leaders will cause friction between our parties”.

He also asked Nadda to free him to choose an independent path if the BJP was facing any problem in the Bihar alliance due to him or his party, but assured that any fresh step would not be against the interests of the BJP.

Chirag has vowed to put up candidates against the JDU during the elections but has professed full support to the BJP. He has already announced 40 candidates, who could queer the pitch for the JDU in the polls. Besides, many of the LJP candidates are those who have quit the BJP and the RSS recently to contest elections, indicating that it could be a brainchild of top leaders from the saffron party to undermine Nitish and ride to power in the post-poll scenario.

“The timing of the release of the letter is significant. It tends to discredit Nitish in the eyes of the Scheduled Castes ahead of the polls for allegedly humiliating Ram Vilas. This may influence the pattern of voting. Secondly, Chirag, by taking the onus on himself, tries to absolve the BJP of allegations of scheming against Nitish,” a senior JDU leader told The Telegraph on the condition of anonymity.

A few political leaders from different parties said the letter was aimed at gathering the sympathy of voters, especially those hailing from the Scheduled Castes.

Ram Vilas’s body was brought to the Patna airport on a special flight of the Indian Air Force on Friday evening, where Nitish and senior BJP leaders, including Sushil Kumar Modi, paid floral tributes. The cremation is expected to take place on Saturday.