'The situation along the border is stable and improving', says foreign minister 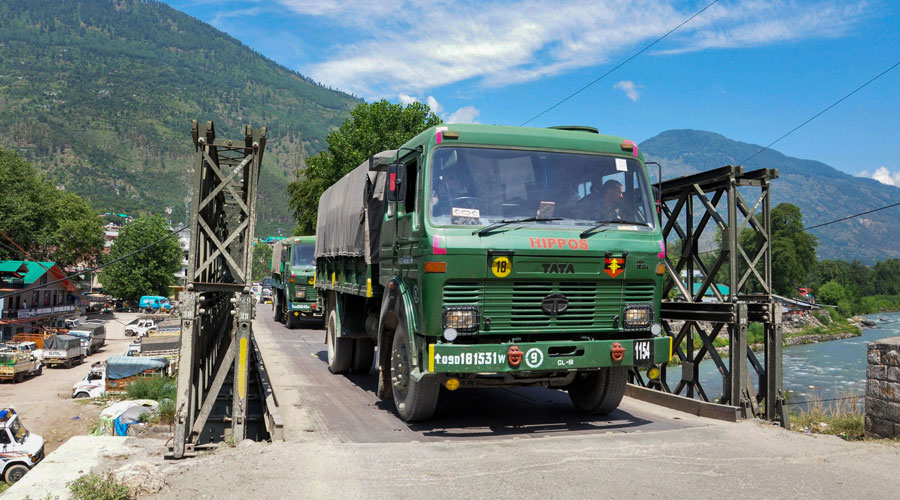 Indian army trucks depart towards Ladakh amid stand off between Indian and Chinese troops in eastern Ladakh, at Manali-Leh highway in Kullu district on Monday.
PTI
PTI   |   Beijing   |   Published 09.07.20, 02:59 PM

China on Thursday said Chinese and Indian troops have taken "effective measures" to disengage at the Galwan Valley and other areas along the Line of Actual Control (LAC) in eastern Ladakh and the situation is "stable and improving," days after the two sides agreed on an expeditious withdrawal of soldiers from all the standoff points.

The remarks by Chinese Foreign Ministry spokesman Zhao Lijian came a day after people in New Delhi familiar with the developments said that the Chinese military removed all temporary structures and completed withdrawal of its troops from the face-off site in Hot Springs in eastern Ladakh.

Zhao told a media briefing here that following the consensus reached at the commander-level talks, China, India border troops have taken effective measures to disengage at the front-line at the Galwan Valley and other areas.

The situation along the border is stable and improving, he said.

Asked about further talks between the two countries, Zhao said the two sides will continue dialogue and communication through military and diplomatic channels including by holding meeting of the Working Mechanism for Consultations and Coordination (WMCC) on the Sino-Indian border affairs.

We hope India will work together with us to take concrete action and implement the consensus reached and jointly work for de-escalation along the border, the spokesman added.

The disengagement process of the troops on both sides began on Monday morning after a nearly two-hour telephonic conversation between National Security Advisor Ajit Doval and Chinese Foreign Minister Wang Yi on Sunday.

At the talks, the two sides agreed on an expeditious withdrawal of troops from all the standoff points to bring back peace and tranquility in the region. Doval and Wang are Special Representatives (SR) for the boundary talks.

In New Delhi, the people familiar with the developments said that the two armies are expected to carry out a joint verification in the next few days to assess the implementation of the disengagement process once the dismantling of the temporary infrastructure and withdrawal of troops by China are completed at the friction points along the LAC in eastern Ladakh.

There has been thinning out of troops from Finger areas in Pangong Tso as well, they said. Pangong Tso has been a major face-off site between the two sides.

The two militaries are set to hold extensive talks on finalising modalities for restoring normalcy and bringing back peace and tranquillity in the region after the verification of the disengagement exercise is completed, they added.

Government sources in New Delhi said the Chinese military has already removed tents and withdrew its personnel from patrolling point 14 in Galwan Valley, the site of violent clashes between the two armies on June 15 that left 20 Indian soldiers dead.