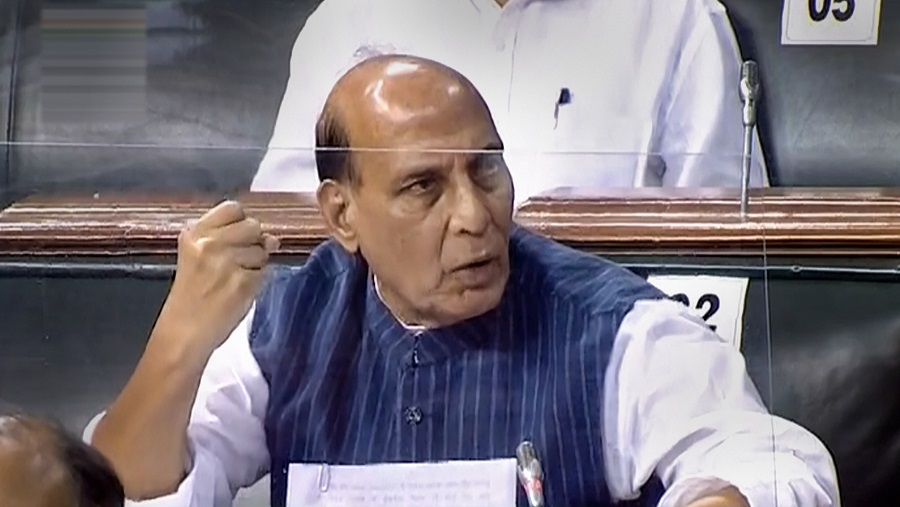 Defence Minister Rajnath Singh told Parliament on Tuesday that the border issue with China was still unresolved as China "does not recognise the current boundary", explaining that this difference in perception had led to the face-off at the Line of Actual Control.

India, he said, has been following the customary line that was agreed upon in the 1960s. "But China does not agree to this now and says that both sides have different perspectives of this line," he said in a statement in the Lok Sabha.

The minister said that China has "unilaterally violated the bilateral agreements signed in 1993 and 1996," adding that the Indian soldiers stopped these transgressions showing "patience and resolve when required and courage and valour when required".

Singh went on to iterate that India was committed to a peaceful resolution of the current border stand-off with China in Ladakh but that any attempt to unilaterally alter the status quo by the neighbouring country was unacceptable.

The Indian Army, he said, has inflicted heavy costs, including casualties on the Chinese side during the clash with the PLA at the Galwan valley on June 15. “I met my Chinese counterpart in Moscow recently, and put forward our concerns, but made it absolutely clear that India is very serious about issues of sovereignty,"  Singh told Parliament in what is the first session after more than five months.

The defence minister said that since April, India has seen a build-up of troops and armaments by the Chinese side in the border areas adjacent to eastern Ladakh. He said in early May, the Chinese side had taken action to hinder the normal, traditional patrolling pattern of Indian troops in the Galwan Valley area, which resulted in a face-off.

Singh said even as this situation was being addressed by ground commanders as per the provisions of the bilateral agreements and protocol, in mid-May, the Chinese side made several attempts to transgress the LAC in other parts of the Western Sector.

"This included Kongka La, Gogra and North Bank of Pangong Lake. These attempts were detected early and consequently responded to appropriately by our armed forces.

"We made it clear to the Chinese side both through diplomatic and military channels that China was, by such actions, attempting to unilaterally alter the status quo. It was categorically conveyed that this was unacceptable," he said.

The government, which has been under Congress pressure to explain what the party called the "real situation" in Ladakh, said there would be no discussion on the matter given the "sensitivity" of the situation.