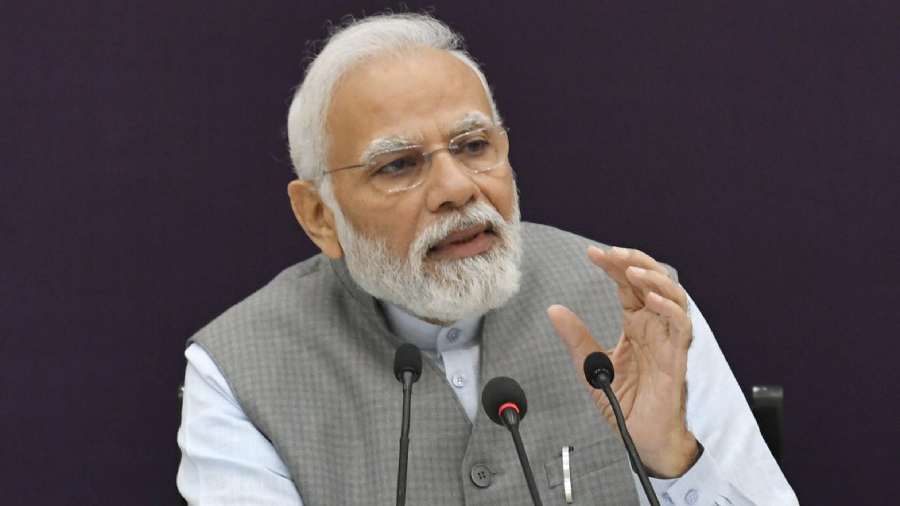 Chief ministers of some non-BJP ruled states on Sunday asked the Centre not to "force" its policies but to strengthen cooperative federalism and also sought a five-year extension for the compensation paid to states for revenue shortfall due to GST implementation.

West Bengal Chief Minister Mamata Banerjee emphasised that the Centre should look into the demands of the state governments "more seriously", according to official sources.

No policies should be forced on state governments and they should not be pressured to implement the National Education Policy (NEP), she said at the meeting and called for "greater cooperation" between the Centre and the states.

Speaking in the same vein, Kerala Chief Minister Pinarayi Vijayan said the Centre should not go against the federal structure of the Constitution and legislation on subjects listed in its concurrent list should be carried out in consultation with the states.

Vijayan said the central government should refrain from making laws on matters in the State list of the Constitution.

Asking the Centre "not to challenge" federalism, Vijayan said steps should be taken to raise Kerala's credit limit as it has not yet recovered from the economic problems caused by COVID-19.

He also drew the attention of the council to the various GST related issues and said there needs to be a review of the decision to impose the tax on essential items.

He also requested that the GST compensation to the states be continued for another five years.

Vijayan further said the southern State has entrusted matters related to panchayats and municipalities, mentioned in the 11th and 12th Schedules of the Constitution, to the local self-governing bodies as part of its initiative to decentralise power.

Therefore, the Centre should consider this aspect also when distributing the consolidated funds to states, he said.

Vijayan also spoke on the need for a legal solution to the Supreme Court's direction to maintain a one-km wide eco-sensitive zone (ESZ).

The other issues he touched upon in his speech were the increase in allocation of funds under PMAY for urban and rural projects, timely completion of national highway development, approval of Kerala's air-rail projects, providing technical and financial support to improve coastal protection and reviewing the cut in kerosene quota as the same was adversely affecting fishermen.

In his remarks, Chhattisgarh Chief Minister Bhupesh Baghel reiterated his demand to the Centre seeking a five-year extension for the compensation paid to states for revenue shortfall due to GST implementation and called for revising the rates of royalty for coal and other major minerals from the state.

Addressing the meeting, Baghel pressed for the state's demand of GST compensation, transfer of the amounts collected as 'additional levy' from coal block companies and reimbursement of expenditure of Rs 11,828 crores made by the state government for eradication of Naxalism.

There has been a loss of revenue to states due to the GST tax system and the Centre has not made arrangements to compensate the loss of revenue of about Rs 5,000 crore to the state in the coming year, so the GST compensation grant should be continued for the next five years after June 2022, the chief minister was quoted as saying in a statement issued by his government.

When a nationwide GST subsumed 17 central and state levies from July 1, 2017, it was decided that states would be compensated for any loss of revenue from the new tax for five years, he said, adding the timeframe ended on June 30 this year.

When the GST was rolled out, states were promised compensation for revenue loss till June 2022. The compensation amount was raised from levying a cess on luxury, demerit and sin goods over and above the 28 per cent tax.

Non-BJP ruled states, such as Chhattisgarh (Congress ruled), Kerala (LDF government) and Rajasthan (Congress ruled), have in the past also demanded that the compensation regime be extended by five years, the statement said.

Noting that about 65 per cent of the mineral revenue of the state is the source of iron ore mines operating in the state, he called for a revision of royalty rates as necessary in the financial interest of the state. Baghel requested a revision in the rates of royalty for coal and other major minerals.

He also called for speedy action on other pending demands of the state government including a refund of deposits in the New Pension Scheme and ensuring the availability of jute gunny bags.

The chief minister noted that NITI Aayog has appreciated the better performance of the aspirational districts of the state in the last three and a half years.

Regarding the implementation of the National Education Policy, the chief minister said that many important steps have been taken in this direction in the state.

While speaking on the agenda of urban administration, Baghel pointed out that Chhattisgarh has won the state clean survey for three consecutive years, the statement said.

Prime Minister Modi praised Chhattisgarh's Godhan Nyay Yojana at the NITI Aayog meeting, saying that the scheme is in the interest of the farmers as vermicompost prepared from cow dung helps in increasing the productivity of the field, the statement said.

Baghel also suggested that MGNREGA should be implemented in rural areas located near cities and cities with a population of less than 20,000.

Punjab Chief Minister Bhagwant Mann raised the issue of granting a legal guarantee for Minimum Support Price (MSP) on crops to safeguard the interest of farmers.

The AAP leader also urged the Centre to ensure a foolproof marketing system for alternative crops.

Mann said Agriculture is no longer a profitable venture and all out efforts must be made to bail out farmers from this situation for which the Union government must step in, according to an official statement.

Odisha Chief Minister Naveen Patnaik said India is at the crossroads of becoming a great economic superpower rooted in inclusive growth and NITI Aayog can play an important role in facilitating this.

"We all accept that the state and central governments are political entities and sometimes there are disputes in the implementation of central schemes. NITI Aayog can resolve these issues like an ombudsman," Patnaik said.

This will promote cooperative federalism and speedy implementation of schemes, he said. Noting that Odisha is impacted by natural disasters almost every year, Patnaik urged the Centre to make it a special focus state and allocate funds for disaster-proofing.

"Team India" has shown its resolve under the prime minister's leadership in effectively handling the COVID-19 pandemic, Patnaik was quoted as saying in a statement.

Today India is showing its sports prowess in the Commonwealth Games, he said, congratulating the athletes who are making the motherland proud.

"As regards my state, historically we have been neglected in the subjects in the central list viz telecom, railways and banking. We have the lowest density in all these crucial infrastructures and I would urge the central government to give special focus to Odisha," he said.

The chief minister pressed for disaster-resilient infrastructure to protect the state and its people from the vagaries of nature.

"I would sincerely request the central government to make Odisha a special focus state and allocate funds for disaster proofing," Patnaik said.

The Pradhan Mantri Fasal Bima Yojana has some implementation issues in the field because of which genuine farmers are deprived in some cases, he pointed out.

NITI Aayog may study this and suggest ways to protect the interest of farmers, the chief minister said.

He said most of the state's tribal and KBK (Koraput, Balangir and Kalahandi) districts have been bypassed from new allocation under the Pradhan Mantri Awas Yojana.

"I would request the central government to immediately resolve this issue and allocate houses. The state government has complied with all the queries raised in this regard," he said.

Jharkhand Chief Minister Hemant Soren sought a special package from the Centre to deal with the drought-like situation in the state, a statement issued by his office said.

He also demanded a package for the development of irrigation facilities in the state. Seeking NITI Aayog's intervention, he asked for necessary instructions to facilitate approval of the Kisan Credit Card by all banks.

Andhra Pradesh Chief Minister Y S Jagan Mohan Reddy said his government has been according top priority to the agriculture sector as its share in the Gross State Domestic Product (GSDP) was 35 per cent.

Similarly, effective policies were being implemented in the education sector to improve the outcomes and make the children competitive.

At the Governing Council meeting of the NITI Aayog, the chief minister highlighted the initiatives of his government in the two sectors and presented a note, a release from the CMO in Amaravati said.

Among the BJP-ruled states, Haryana Chief Minister Manohar Lal Khattar said that the use of the latest technology and crop diversification is being promoted in the state.

He said that an area of 46,249 hectares has been diversified in place of paddy under the 'Mera Pani-Meri Virasat' scheme.

Uttar Pradesh Chief Minister Adityanath said his state's contribution to fulfilling the dream of India making a USD 5 trillion economy will be very important, and in the coming five years, it will achieve the target of becoming a USD 1 trillion economy.