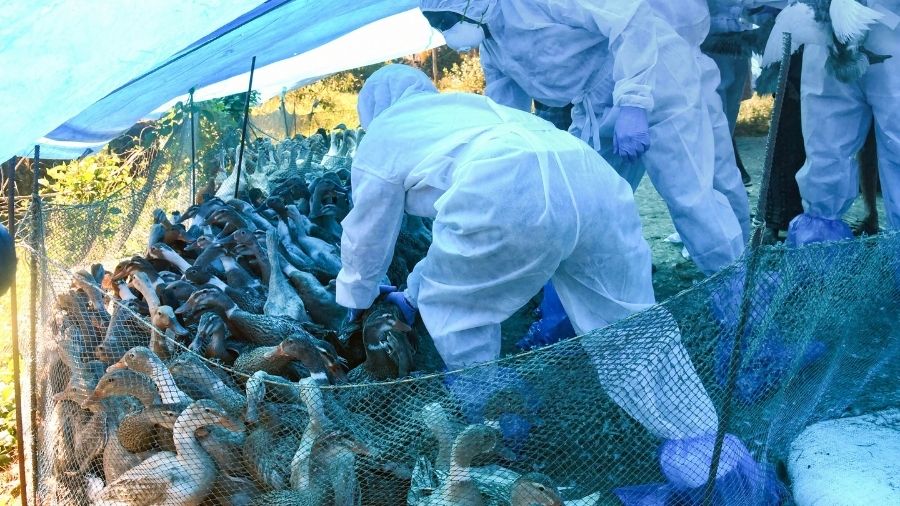 The Centre on Wednesday said it has deployed multi-disciplinary teams to avian influenza-affected Alappuzha and Kottayam districts of Kerala, and Panchkula district of Haryana, making them two out of the four states that have confirmed Avian Influenza or bird flu, as lakhs of birds were found dead in the last 10 days.

It has also issued advisories to contain further spread of the infection in poultry ducks, crows and migratory birds.

In a statement, the Union Ministry of Fisheries, Animal Husbandry and Dairying said that other states have been asked to keep a vigil on any unusual mortality amongst birds.

Avian Influenza has been confirmed at 12 epicentres in four states -- Kerala, Rajasthan, Madhya Pradesh and Himachal Pradesh, and thousands of birds have already been culled there.

“After confirmation of positive samples from ICAR-NIHSAD (National Institute of High Security Animal Diseases), Avian Influenza has been reported at 12 epicenters,” the ministry said in its statement.

“Infection in humans is not yet reported in India though the disease is zoonotic. There is no direct evidence that AI viruses can be transmitted to humans via the consumption of contaminated poultry products,” it said.

Of the 12 epicenters, the bird flu has been reported in crows in Baran, Kota, Jhalawar region of Rajasthan as well as Mandsaur, Indore, Malwa areas of Madhya Pradesh.

Whereas in Himachal Pradesh, the infection was found in migratory birds in Kangra region and in poultry ducks in Kottayam, Alappuzha (4 epicentres) in Kerala, the ministry said.

Over 69,000 birds, mostly ducks, were culled in the districts of Alappuzha and Kottayam to contain the H5N8 strain of bird flu, Kerala Animal Husbandry Minister K Raju said on Wednesday.

In Haryana, over four lakh poultry birds have died at farms in Panchkula district in the past 10 days, officials said Tuesday, adding a team from Jalandhar's Regional Disease Diagnosis Laboratory has collected samples. However, the state has not confirmed Avian Influenza yet.

The Centre on Wednesday said it has set up a “control room” in New Delhi to keep a watch on the situation and to take stock on a daily basis the preventive and control measures undertaken by the state authorities.

According to the reports received from the states, control measures are being taken in Madhya Pradesh and Rajasthan as per the guidelines of National Action Plan of Avian Influenza.

In the case of Himachal Pradesh, another advisory was issued on Tuesday to avoid further spread of the infection, the Centre said.

As per the action plan on Avian Influenza, the Union ministry has suggested the affected states for strengthening the biosecurity of poultry farms, disinfection of affected areas, proper disposal of dead birds/carcasses, timely collection and submission of samples for confirmation and further surveillance, intensification of surveillance plan as well as the general guidelines for prevention of disease spread from affected birds to poultry and human.

The Ministry of Fisheries, Animal Husbandry and Dairying has also suggested the states for coordination with the forest department for reporting any unusual mortality of birds.