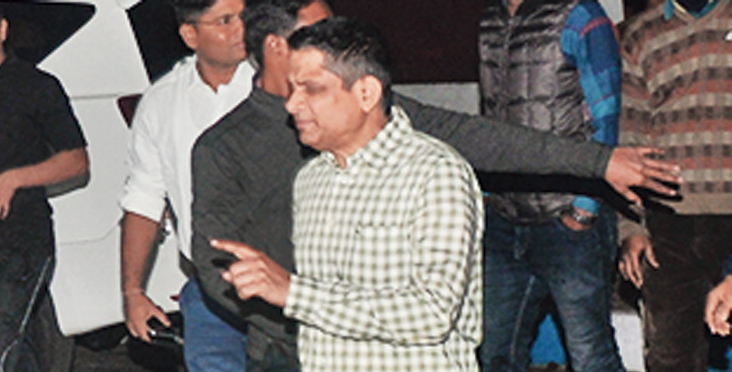 The CBI plans to approach the Supreme Court on Monday against the Bengal government, which it accuses of stopping its officers from going ahead with their probe into the Saradha deposit-default case and questioning Calcutta police commissioner Rajeev Kumar.

“We plan to move court tomorrow morning as it was the Supreme Court that had ordered the Saradha probe. Our sleuths were only carrying out their duties,” an agency official said.

He said CBI officers led by interim director Nageswara Rao were consulting senior law officers of the central government to chalk out a strategy against the Mamata Banerjee government in the apex court.

“The interim director has sought central assistance in the case,” he said.

Following the showdown between the CBI and the Bengal government, the Centre on Sunday night asked the newly appointed CBI director, Rishi Kumar Shukla, to take charge on Monday. Usually, the new appointee is given about a week’s time to join.

A retired CBI joint director clarified that the Supreme Court was not monitoring the case but had only transferred the investigation to the CBI in 2014.

“So, since the Bengal government had withdrawn its ‘general consent’ to the CBI to carry out operations in the state without informing it, the agency should have approached the apex court before landing up at the police commissioner’s residence,” he said.

“It seems the agency’s moves are being directed by its political masters to settle scores with rivals.”

But a serving CBI officer said the Bengal government’s withdrawal of the “general consent” made no difference.

“The agency’s officers don’t need the state’s permission every time they enter its territory to investigate a case where a high court or the Supreme Court has ordered a CBI probe,” he said.

CBI spokesperson Nitin Wakankar said: “We have nothing to say on this as of now.”

In Calcutta, the CBI drew up a detailed report about how its officers were detained, taken to a police station and later released, aiming to place it before the apex court on Monday.

Till late Sunday night, discussions were on with the agency’s legal cell in Delhi on how to draw up a case against Calcutta police officers for preventing CBI officers from doing their duty and forcibly restraining them.

Sources said the CBI was collecting video grabs of the showdown outside Kumar’s residence. They alleged that a team of officers from the Bidhannagar police commissionerate had been stationed outside the CGO complex in Salt Lake, where the agency has its office, for sometime in the evening before being withdrawn. Later, the Centre sent a CRPF contingent to guard the complex at night.

“Our (CBI) officers had gone to examine the police commissioner. We were held up in our office while our team was taken to the police station,” said Pankaj Srivastava, the joint director who oversees operations in the east.

A CBI officer said: “We wanted to hand over some documents to him (Kumar) but he would not accept them.”

Agency sources in Delhi said that Kumar, whom they described as a suspect in the case, had written to the now-removed CBI director Alok Verma last October after receiving summons to appear before the agency.

The purported letter, of which this newspaper has a copy, alleges a witch-hunt for which it blames “one senior leader of a political party”.

“About a year ago one public comment was made by one senior leader of a political party, against whom a criminal and civil defamation case was filed. There are strong reasons to believe that this is being done to satisfy the gentleman,” the purported letter, dated October 27, 2017, says.

“May I request to kindly get the material/ evidence collected by investigating officer of this case (against Sudipta Sen and others) by another senior officer who is not part of the present team, investigating the case, which I am afraid, seems to be pursuing an agenda rather than carrying out unbiased investigation. I would request you to look into this personally.”