Agency carrying out searches at 14 locations in Karnataka, Delhi and Maharashtra in a corruption case 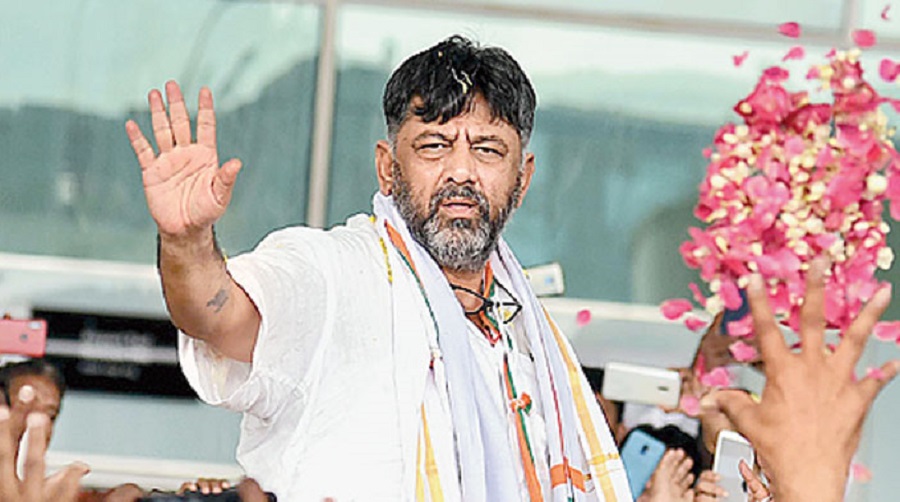 The CBI has till now recovered Rs 50 lakh from multiple premises it has searched in a corruption case related to Congress leader D K Shivakumar, officials said on Monday.

The Central Bureau of Investigation (CBI) is carrying out searches at 14 locations in Karnataka, Delhi and Maharashtra in the case that pertains to amassing of disproportionate assets, they said.

The search operation may be expanded during the day, the officials said.

The CBI has registered a fresh case against the Congress leader based on a source information from another agency. The information relates to assets amassed during Shivakumar's tenure as a minister in Karnataka, they said.

Following the registration of FIR, CBI teams started searches on Monday morning at 14 locations -- nine in Karnataka, four in Delhi and one in Mumbai.

So far, Rs 50 lakh has been recovered from premises of Shivakumar, his family members and associates during the searches in the corruption case, the officials said.

Places that are being searched include properties of Shivakumar's brother and MP from Bengaluru Rural D K Suresh, according to sources.

CBI sleuths reached their residences in Bengaluru and also at Doddalahalli in Kanakapura early this morning.

"CBI has registered a case against the then minister of the Karnataka government and others on the allegations of acquisition of disproportionate assets. Searches are being conducted today at 14 locations including nine in Karnataka, four in Delhi, one in Mumbai," the CBI said in a statement.

Congress leaders have hit out at the BJP governments at the Centre and in Karnataka for the CBI searches, questioning its timing ahead of the November 3 bypolls to the Sira and the R R Nagar assembly segments.

"The insidious game of intimidation & machinations of Modi-Yeddyurappa duo being executed by a puppet CBI by raiding @DKShivakumar won't deter us. CBI should be unearthing the layers of corruption in Yeddyurappa Govt. But, 'Raid Raj' is their only 'Machiavellian Move'!," Surjewala said on Twitter.

"Let Modi & Yeddyurappa Govts & BJP's frontal organizations i.e CBI-ED-Income Tax know that Congress workers & leaders will not be cowed down nor bow down before such devious attempts.Our resolve to fight for people & expose BJP's maladministration only becomes stronger," he tweeted.

The insidious game of intimidation & machinations of Modi-Yeddyurappa duo being executed by a puppet CBI by raiding @DKShivakumar won’t deter us.

CBI should be unearthing the layers of corruption in Yeddyurappa Govt.

Congress Legislature Party leader Siddaramaiah too in a tweet said, "@BJP4India has always tried to indulge in vindictive politics & mislead public attention. The latest CBI raid on @KPCCPresident@DKShivakumar's house is another attempt to derail our preparation for bypolls. I strongly condemn this."

Congress spokesperson A S Ponnanna, who is also a senior advocate in the High Court of Karnataka, claimed that the court had asked the CBI not to precipitate as Shivakumar had questioned the permission given by the Karnataka government to the CBI to probe the alleged corruption charges against him.

"I'm surprised politics is down to this level... CBI has to function under the Delhi Special Police Establishment Act, under which if they have to come to a state and investigate, they have to get permission from the state government, the permission that was given has been questioned by Shivakumar," he said.

The court had said do not precipitate, what I have understood from this is- they (CBI) should have not have acted. They should have got it vacated from the court and acted, after permission from the court," Ponnanna, who served as an additional advocate general during the Congress government, said, adding that the investigation should be fair and lawful.

Shivakumar was arrested on September 23 last year by the Enforcement Directorate (ED) in the money laundering case and was lodged in the Tihar jail under judicial custody.

The Congress leader was released from the jail on October 23 after the Delhi High Court granted him bail.