CBI books Karti Chidambaram in a 'visas for bribe' case 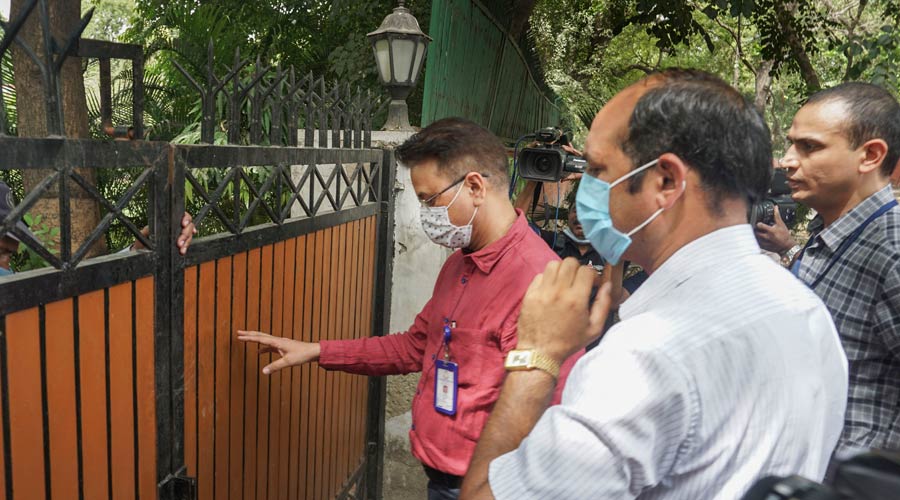 The CBI has registered a fresh case against Lok Sabha member Karti Chidambaram for allegedly facilitating visas of 263 Chinese nationals for a power company after receiving illegal gratification of Rs 50 lakh 11 years ago when his father P Chidambaram was the Union home minister, officials said on Tuesday.

CBI teams conducted coordinated search operations at 10 locations in multiple cities in the country, including residences of the Chidambarams in Chennai and Delhi on early morning after registering the FIR, they said.

"I have lost count, how many times has it been? Must be a record," Karti tweeted immediately after the CBI raids without specifying.

Senior Congress leader P Chidambaram, in his tweets in Hindi and English, said a CBI team searched his residence in Chennai and his official residence in Delhi.

"The team showed me an FIR in which I am not named as an accused. The search team found nothing and seized nothing," he said, adding, "I may point out that the timing of the search is interesting."

However, he did not mention what "timing" he was referring to.

In the new case, which is an offshoot of an ongoing probe in the INX media case, the CBI has alleged that Karti had allegedly received Rs 50 lakh bribe to facilitate the visa of 263 Chinese nationals during the UPA regime for Talwandi Sabo power project in July-August 2011, when his father was the Union home minister, the officials said.

"The searches at our Punjab facility have been part of a larger CBI investigation. We are extending full cooperation to the authorities and facilitating the due process. We have no further comments," a Talwandi Sabo Power Limited spokesperson said.

Besides Karti, the CBI has also named his close associate S Bhaskararaman, representative of Talwandi Sabo power project Vikas Makharia who allegedly offered the bribe, the company Talwandi Sabo Power Limited, Mumbai-based Bell Tools Limited through which bribes were alleged routed and unidentified others in the FIR registered under 120-B (criminal conspiracy), 477A(falsification of accounts) and section 8 and 9 of Prevention of Corruption Act, they said.

The CBI had stumbled upon some documents from the hard drive of Bhaskararaman showing suspicious transaction of Rs 50 lakh based on which the agency had registered a preliminary enquiry. The findings of preliminary enquiry showed enough prima facie material to register an FIR.

The agency has alleged that the Talwandi Sabo Power based at Mansa, Punjab was in the process of establishing a 1980 MW thermal power plant for which establishing of plant was out-sourced to a Chinese company.

The project was running behind its schedule and the company was allegedly facing prospects of penalty, CBI spokesperson R C Joshi said in a statement.

"In order to avoid penal actions for the delay, the said private company (Talwandi Sabo) of Mansa was trying to bring more and more Chinese persons and professionals for their site at District Mansa (Punjab) and needed Project visas over and above the ceiling imposed by Ministry of Home Affairs," Joshi said.

The CBI has alleged Makharia, representative of the power company, approached Karti through his "close associate/front man" Bhaskararaman, officials said. "They devised a back-door way to defeat the purpose of ceiling (maximum of Project visas permissible to the company's plant) by granting permission to re-use 263 Project visas allotted to the said Chinese company's officials," Joshi said.

Makharia allegedly submitted a letter to Home Ministry seeking approval to re-use the project visas allotted to this company, which was approved within a month and permission was issued to the company, officials said.

"A bribe of Rs 50 lakh was allegedly demanded by said private person based at Chennai (Karti) through his close associate/Front man (Bhaskararaman) which was paid by the said Mansa-based private company (Talwandi Sabo)," Joshi said.

It has been further alleged that the payment of said bribe was routed from Talwandi Sabo to Karti and Bhaskararaman through Mumbai-based Bell Tools Ltd camoflagued as payment of false invoice raised for consultancy and out of pocket expenses for Chinese visas related works, the CBI FIR said.

"... Whereas the private company based at Mumbai was never in any kind of work relating to visas rather it was in an entirely different business of industrial knives," Joshi said.

I have lost count, how many times has it been? Must be a record.

Congress's Rajya Sabha MP P Chidambaram questioned the timing of the move, adding that while his house was searched, the CBI team found nothing.

"This morning, a CBI team searched my residence at Chennai and my official residence at Delhi. The team showed me a FIR in which I am not named as an accused," the former Union finance minister tweeted on Tuesday.

This morning, a CBI team searched my residence at Chennai and my official residence at Delhi. The team showed me a FIR in which I am not named as an accused.

The search team found nothing and seized nothing.

I may point out that the timing of the search is interesting.

In the new case which is an offshoot of an ongoing probe, the CBI has alleged that Karti had received Rs 50 lakh alleged bribe to facilitate the visa of 250 Chinese nationals during the UPA regime for Talwandi Sabo power project in July-August 2011, when P Chidambaram was the Union home minister, the officials said.

It is alleged that the power project in Punjab for which establishment contract was given to a Chinese firm was running behind schedule and it needed manpower but there was a ceiling for allowing work permits of foreign nationals, they said.

It is alleged that the firm approached Karti who used his influence to facilitate the visas in violation of ceiling imposed, they added.

The CBI got the whiff of the case during an ongoing investigation against Karti who is already under probe in getting Foreign Investment Promotion Board (FIPB) clearance for the INX media and Aircel Maxis case, they said.

Following the scrutiny of the transactions, the CBI had detected the payments worth Rs 50 lakh which are alleged to be illegal gratification for facilitating the visa of Chinese workers who were supposed to work at the plant, the officials said.