Charges of police brutality and groping during Friday's JNU protest march have so far led to departmental action against two lower-rung cops and an FIR against students that cites charges carrying a maximum cumulative jail term of 11 years. 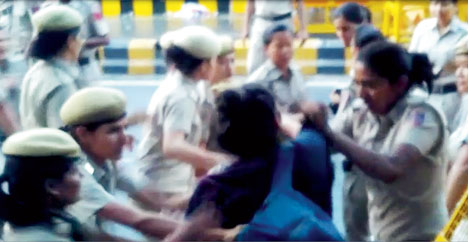 New Delhi: Charges of police brutality and groping during Friday's JNU protest march have so far led to departmental action against two lower-rung cops and an FIR against students that cites charges carrying a maximum cumulative jail term of 11 years.

The police have suspended a woman constable of their armed wing and a male head constable on charges of "stealing" Hindustan Times photojournalist Anushree Fadnavis's camera.

Fadnavis's complaint was not, however, converted into an FIR, which could have led to arrest, prosecution and eventually jail for the suspended duo. The duration of the suspensions is not clear, nor have the cops been named.

An FIR, however, has been filed against the marchers for alleged failure to take police permission, a charge the JNU students' union has denied while accusing the administration of "brutality and filing of false FIRs".

Fourteen male and eight women students, who had been detained for a while, have been named in the FIR and accused of rioting with weapons, assaulting public servants, and using insults to outrage the modesty of women.

The complaints of Fadnavis and a woman reporter who has accused Delhi Cantonment station house officer Vidyadhar Singh of groping her had been handed over to the police's vigilance branch. On Monday, the vigilance branch will record the statements of the reporter and a witness.

Several students and journalists were injured in a baton charge during the march to Parliament, organised by JNU teachers and students to press for academic freedom and action against alleged sexual harassment by a professor.

Fadnavis's camera was seized after she allegedly took pictures of cops kicking a student. A video of Fadnavis being assaulted by women constables has gone viral.

It appears the suspended cops did not report the seizure of the camera, which may have led to the charge of stealing. Police source said the camera would be returned soon.

Police officers have tweeted videos of students pushing down a barricade and of a protester hitting an inspector with an umbrella, calling it "guerrilla tactics". The inspector was admitted to hospital and three other cops suffered injuries that needed medical treatment.

A statement by the JNU students' union said: "More than 4,000 students, teachers and citizens of Delhi, in a disciplined and peaceful manner, started the march from JNU at 3.30pm... with full information to the Delhi police."

It alleged the police had, "in a pre-planned and well-coordinated strategy, started water-cannoning the peacefully gathered students and caused a huge stampede and chaos, resulting in multiple injuries to numerous students and teachers".

It accused the Narendra Modi government of lodging "fabricated cases against JNU students and teachers" to "shield its own protégé Atul Johri (the JNU professor arrested on sexual harassment charges and now out on bail)".