Advertisement
Home / India / Bollywood calls out the ‘spineless’ among its own

Bollywood calls out the ‘spineless’ among its own 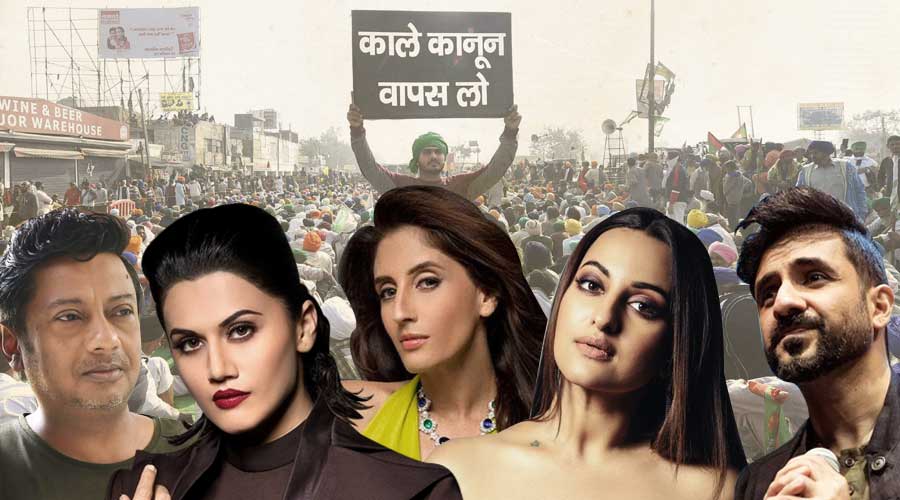 Actor Taapsee Pannu, who has been a vocal supporter of farmers issue, took a jibe at the government's campaign and said one should focus on strengthening the system
Graphic: The Telegraph Online
Our Bureau, Agencies   |   Mumbai   |   Published 04.02.21, 07:04 PM

A section of Bollywood celebrities on Thursday criticised big stars such as Akshay Kumar and Ajay Devgn for their similarly worded tweets in response to pop star Rihanna's post drawing attention to the farmers' agitation in India.

Actor Taapsee Pannu, filmmaker Onir, actor Arjun Mathur and others criticised the seemingly orchestrated show of solidarity by the big stars towards the government.

Rihanna, the fourth most followed celebrity on Twitter with over 100 million followers, took to the microblogging site on Tuesday and shared a CNN news article headlined, "India cuts internet around New Delhi as protesting farmers clash with police."

"Why aren't we talking about this? #FarmersProtest," Rihanna wrote on Tuesday.

India on Wednesday reacted sharply to these tweets with several Bollywood and cricket stars and top ministers rallying around the government in its pushback.

The "temptation of sensationalist social media hashtags and comments is neither accurate nor responsible, the Ministry of External Affairs said. Facts must be ascertained before the rush to comment, the ministry added, using the hashtags #IndiaTogether and #IndiaAgainstPropaganda to make its point.

Personalities including Sachin Tendulkar, Virat Kohli, Lata Mangeshkar, Akshay Kumar, Ajay Devgn, Karan Johar and others rallied around the government on social media using hashtags - #IndiaTogether #IndiaAgainstPropaganda as they reacted to a statement by the Ministry of External Affairs on the issue.

Calling it "embarrassing" and "tragic", many in the film industry called out the celebrities for their sudden Twitter activity while they failed to notice or acknowledge the plight of farmers.

Actor Taapsee Pannu, who has been a vocal supporter of farmers issue, took a jibe at the government's campaign and said one should focus on strengthening the system.

"If one tweet rattles your unity, one joke rattles your faith or one show rattles your religious belief, then it's you who has to work on strengthening your value system not become propaganda teacher' for others," Pannu wrote.

Actor Sonakshi Sinha, Akshay Kumar's co-star of many films, was among the celebrities to support of Rihanna's tweet.

The actor, in her Instagram stories, shared quotes from storysellers comics, which said the voices raised by the international celebrities are "about the violation of human rights, suppression of free internet and expression, state propaganda, hate speech, and abuse of power."

One of the stories on Sinha's Instagram also dismissed the argument that it was India's internal matter, saying, "these are not alien species but fellow humans who are speaking up for the rights of other humans."

Comedian-actor Vir Das said he was amazed to see how Indians got mobilized' over a tweet by Rihanna and Thunberg.

“Honestly, I don't think Rihanna or Greta have anything more than superficial wisdom about Indian farmers. But gotta say it's hilarious to see literally thousands of shaky Indian men get mobilized over a tweet, all the while proclaiming how secure they are in their policymakers,” he said.

Filmmaker Onir too took a dig at the tweets in support of the government and termed the so-called support from Bollywood as a puppet show'. “It is so embarrassingly obvious that a whole bunch or celebs who do not value their voice have been sent a set message, which they are modifying a bit and postings. They Do what they have been told to. Tragic #puppetShow #worldWithFarmers #IStandWithFarmers,” he tweeted.

Celebrity jewellery designer Farah Khan Ali tweeted, "Disappointed with the fraternity tweeting identical tweets that make it more like a marketing gimmick. Whatever their reasons & I'm no one to judge at least u could have tried to make it more original. Now you have given yourselves away. Reel Life Heroes VS Real Life Heroes."

Actor Sayani Gupta tweeted, “Aiyooo! The cute Bhakts have awakened! (You know that moment in a zombie film climax, when the zombie was looking elsewhere, and a human was cautiously stepping away, and bam! It suddenly turns to him.) Just got that feeling!”

Bollywood celebrities have often been called out in the media for not speaking up on politically sensitive topics unlike their counterparts in the US. Actor Swara Bhasker wrote on Wednesday, "Aur Bolo 'Speak Up Bollywood, 'Speak Up celebrities'."

"Made in Heaven" star Arjun Mathur used the hashtags to mock celebrities for displaying an "utter lack of spine", a thought echoed on social media with 'Spineless Celebs' trending on Twitter.

"Let us stand together in displaying our utter and complete lack of spine, in safeguarding our hundreds of crore rupees of income and in supporting this military-style mobilisation against the very masses who have practically treated us as gods and to whom we owe everything we enjoy. Let no sane or humane voice interfere, nor influence you.

"They can spectate, not participate. Please do support us, as we intend to come for you next," Mathur wrote on Instagram.

Actor-TV host Sushant Singh said he was heartbroken with the support pouring in from the film industry for the government. “Why do you make those who are heroes or heroines in films your idols? Heartbroken now...”

Thousands of farmers, mainly from Punjab, Haryana and UP, have been protesting for over two months at Delhi's borders demanding rollback of the Farmers Produce Trade and Commerce (Promotion and Facilitation) Act, 2020, the Farmers (Empowerment and Protection) Agreement on Price Assurance and Farm Services Act, 2020 and the Essential Commodities (Amendment) Act, 2020.