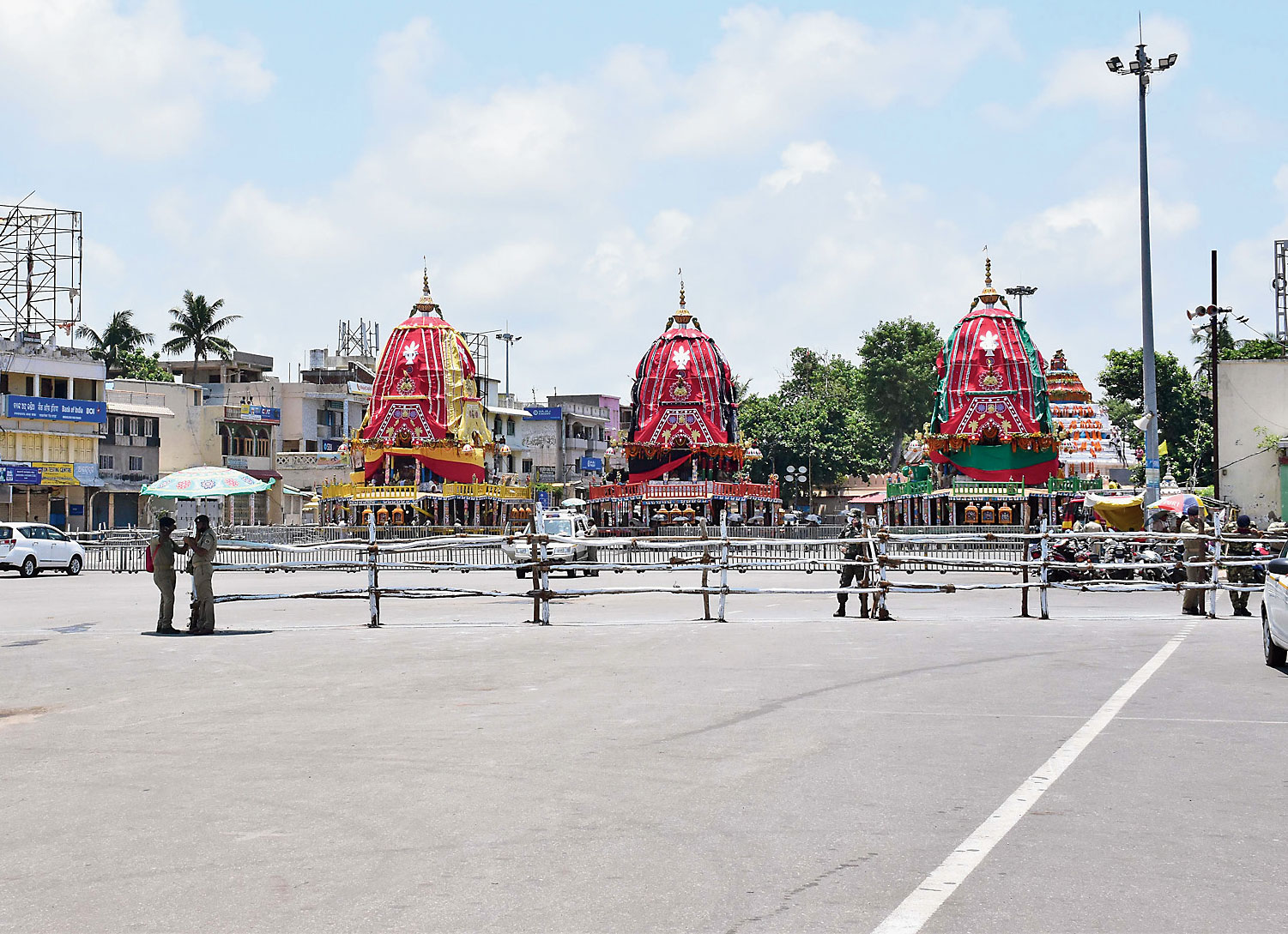 All 5,000 servitors, policemen and Shree Jagannath Temple employees who were involved in the Puri Rath Yatra on Tuesday will undergo Covid-19 tests before they are cleared to be at the Bahuda Yatra (return journey) of the Lord on July 1.

The vice-chairman of the Shree Jagannath Temple Management Committee, Suresh Chandra Mohapatra, told reporters on Wednesday: “As many as 2,500 servitors will undergo a second round of coronavirus tests. We need to ensure that only those who test negative participate in the return journey. The entire pilgrim town will be sanitised. All tests will be done before June 28.”

Policemen and sweepers who were on duty for the Yatra will also be tested.

Mohapatra, an IAS officer who is the government’s representative in the temple committee, said the precautionary measures were being taken after one of the servitors tested positive for Covid-19 on Monday and was barred from participating in the Rath Yatra.

The government is also procuring 5,000 masks for distribution among those who will be present during the Bahuda Yatra.

The temple management committee has now decided to set up a health centre exclusively for the families of servitors, and a special team will monitor the health of the servitors. Isolation facilities will be developed for those who show symptoms of the coronavirus and those who test positive for Covid-19.

The Supreme Court had on Monday reversed its decision to scrap this year’s Rath Yatra in view of the pandemic and allowed the event to take place as scheduled. The court, however, had disallowed devotees from participating in the Yatra and ordered all servitors who were to pull the chariots to undergo Covid tests.

Curfew-like restrictions were put in place in Puri; residents were not allowed to step out of home and all entry point to the temple town were sealed.

Only servitors were allowed to pull the chariots of Lord Jagannath and his siblings Lord Balabhadra and Goddess Subhadra.

As no devotees were allowed to take part in the event, Grand Road, through which the chariots made their way, and Puri in general wore a deserted look. Usually, around 10 lakh people attend the Rath Yatra every year, joining the servitors in pulling the chariots and also lining the road.

“We are conscious of our health needs and are taking all precautions to ensure that no one is affected by the virus. I have already got myself tested twice,” said 32-year-old Jagdish Das Mohapatra, a servitor.

The deities on Wednesday disembarked from the chariots and entered Shree Gundicha Temple.

“All the rituals were conducted peacefully. All the servitors cooperated,” said senior servitor Ramakrushna Das Mohapatra.

The state administration on Wednesday sealed a private hospital in Bhubaneswar for not adhering to Covid-19 guidelines. The Bhubaneswar Municipal Corporation sealed the hospital at Mancheswar following the detection of 27 positive cases there on Tuesday.

“As per the guidelines, any patient seeking admission should undergo the Covid test, but the authorities of the hospital violated this,” said a senior civic official.