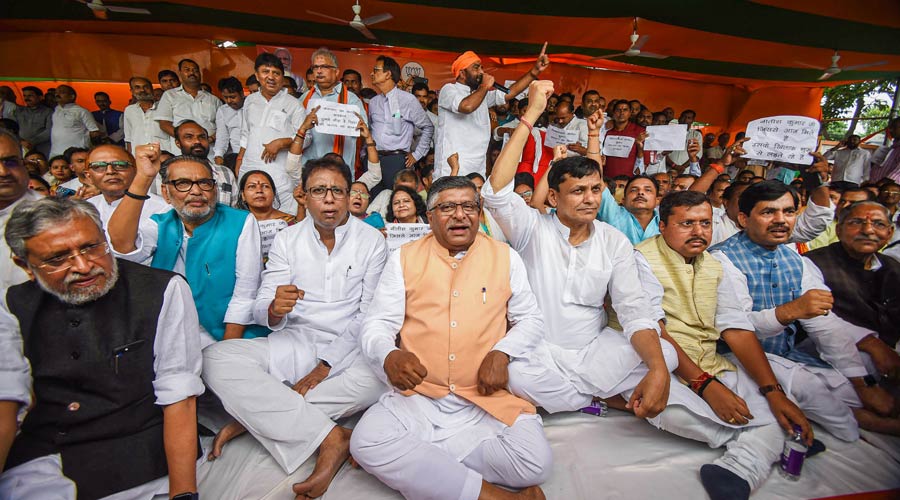 Stripped of power in Bihar, the BJP on Wednesday staged a massive demonstration condemning the betrayal of Chief Minister Nitish Kumar, whose similar volte face five years ago had helped it join the government through the proverbial back door .

The `Maha Dharna' (massive demonstration) staged in front of the party office at Birchand Patel Marg was attended by all BJP MPs and MLAs from Bihar who vowed to expose the 71 years old JD(U) leader through agitations scheduled at district and block levels later this week.

"There is no other reason for the turnaround except his Prime Ministerial ambitions which make him envious of Prime Minister Narendra Modi. He should first try to win a state election on his own, without using an alliance as a crutch," said Union minister Giriraj Singh, the Chief Minister's best known detractor in the state.

The party rank and file seemed bewildered at the sudden turn of events which has taken the spotlight away from the Har Ghar Tiranga programme which the BJP was planning to hold with much fanfare.

Kumar had on Tuesday pulled the plug on JD(U)'s alliance with the BJP and resigned, and followed it up by staking claim to form a new government with support of the opposition Grand Alliance.

The development appears to have swept the BJP off its feet in Bihar where it had organized its first ever joint national executive of the party's seven wings (morchas), attended by party president J P Nadda and, most importantly, Union Home Minister Amit Shah, only last month.

The party had issued a press statement asserting that it was looking forward to contesting the next Lok Sabha and assembly polls under Kumar's leadership, labouring under the impression that it would be sufficient to convince the septuagenarian of the BJP's bona fide.