Advertisement
Home / India / BJP likely to return to power In UP, AAP may score upset win in Punjab, says exit polls
AAP may pull off surprise in Punjab

BJP likely to return to power In UP, AAP may score upset win in Punjab, says exit polls 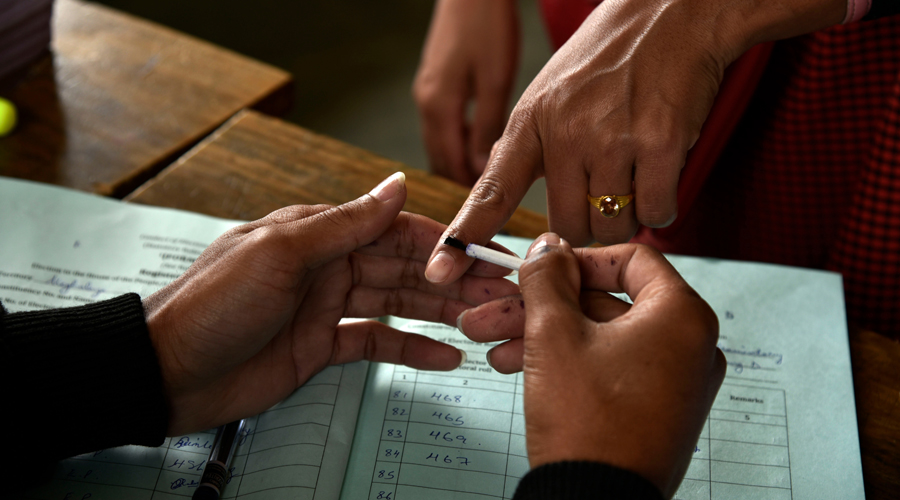 The polls showed that the BJP was still comfortably ahead even in Western Uttar Pradesh, the centre of the farmers’ agitation in the state.
File picture
Paran Balakrishnan   |   New Delhi   |   Published 07.03.22, 09:40 PM

The BJP looks set to win re-election in Uttar Pradesh and the Aam Aadmi Party (AAP) may pull off a shock victory in Punjab, according to most exit polls released late Monday after the close of polling.

In Uttarakhand, the BJP could come out in front even though it has changed three chief ministers in recent years but the margins could be tight according to all the polls and in Goa, the Congress could come out slightly ahead though without enough of a lead to be sure of forming a government. Some polls predicted a hung assembly in Uttarakhand.

The exit polls were unanimous in forecasting that the BJP would win the crucial Uttar Pradesh state but there were huge differences in the number of seats predicted. One poll predicted the BJP would get a winning 211 seats but another predicted it would sweep with 277 seats. The India Today-Axis My India poll forecast a BJP sweep of between 288-326. That could mean either a very slight drop in the number of seats or even an improvement on its already huge majority.

However, the Samajwadi Party (SP) will make a strong leap from only 47 seats to around 160 seats this time around, according to some polls. SP leaders pointed to this as a big improvement even if the party does not win in the state.  Other polls showed the SP getting between 75-101 seats.

The polls showed that the BJP was still comfortably ahead even in Western Uttar Pradesh, the centre of the farmers’ agitation in the state.  In other regions, the India Today-Axis My India poll showed the BJP winning a huge share of the seats.

The AAP, according to some polls, had made huge strides in Punjab and could score a clear victory. However, other polls still indicated that there could be a hung house in the state. Nevertheless, the AAP has spread its wings from the Malwa region and gained strength in different parts of the state. The Axis-My India poll predicted a huge win for the AAP with the party getting 83 seats compared to 25 for the Congress.

Both in Uttarakhand and Goa, there could be hung legislatures. The ABP-CVoter poll was the odd man out in Uttarakhand, predicting that the Congress would squeak home with a small margin. Other polls showed the BJP still in front. However, the polls predicted that BJP’s number of seats could come down from 56 seats to about 36-37. Its vote share has also fallen steeply. Election commentators pointed out that the Congress made the mistake of sending its best-known face, former chief minister Harish Rawat to Punjab to supervise the elections there.

In Manipur, most polls predicted between 23-28 seats for the BJP. However, the India Today-Axis My India predicted that the BJP could win a huge victory with 33 to 43 seats and the Congress could fall to between four and eight. This would mean that it would not need the support of the state’s NPP of chief minister Conrad Sangma. A BJP spokesman attributed this win to the success of the party’s northeast policies.

In Goa where a multi-cornered battle has taken place, there are 40 seats that have been fought over. Four polls showed the Congress slightly ahead with around 15 to 20 seats and four showed the BJP in front.

Commentators said that the local MGP which is tied up with the TMC could win between 3-5 seats. The commentators added that the Christian vote has been split, although the Congress is still likely to get 48 per cent of the Christians. The polls predicted that the AAP will not make any headway in the state. There are likely two to three independents also who could play a big role in the formation of the government. In Goa, the polls appeared to show the BJP ahead in North Goa where there are more Hindu voters.

The polls also appeared to show that women voters in many states have voted for a bigger way for the BJP mainly because of Prime Minister Narendra Modi’s appeal.  In Uttarakhand, there was only a 1 per cent difference between the number of men voting for the BJP and the Congress. By contrast, there was an 8 per cent difference between the two parties when it came to the women’s vote. One analyst reckoned this might be because of the subsidy schemes and free rations, the impact of which was felt directly in homes.