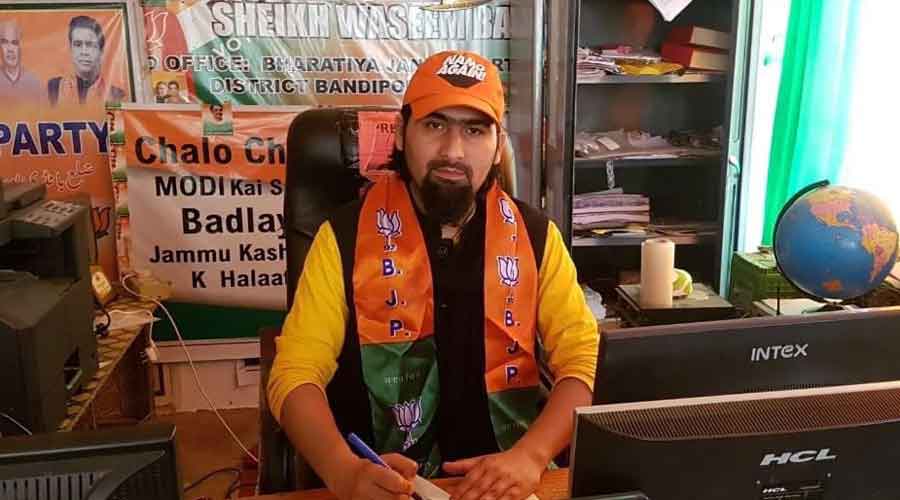 Militants killed a senior BJP leader, his father and brother in a late evening attack in north Kashmir’s Bandipora district during which none of the 10 police guards assigned to the family was present.

Officials said Sheikh Waseem Bari, a state-level executive member of the BJP, his father Bashir Ahmad, a BJP worker, and brother Umar Bari were in the family’s restaurant around 9pm when the militants barged in and fired indiscriminately. The 10 police guards have been detained for questioning.

The BJP’s Jammu and Kashmir vice-president, Sufi Yousuf, said Waseem, in his 30s, had been the party’s district president in Bandipora before he was inducted into the state-level executive council.

“He had been with the BJP for the past 10 years. His father had also been associated with the BJP. His brother was a college student. This is a big loss for the BJP in Kashmir,” Yousuf told The Telegraph.

“They had been provided with security guards but I don’t know where they had gone at the time of the attack. This is certainly a security lapse,” Yousuf said, adding that Waseem’s sister is the BJP president of Bandipora district.

Yousuf said the family’s restaurant was located inside their house complex and that nobody else was there at the time of the attack.

Last month, militants had killed a Congress sarpanch, Ajay Pandita, at his home in Anantnag district.

On social media, many asked what had happened to the BJPs promise of ensuring a militancy-free Kashmir after the scrapping of the erstwhile state’s special status.

National Conference leader and former chief minister Omar Abdullah tweeted: “Sorry to hear about the murderous terror attack on the BJP functionaries and their father in Bandipore earlier this evening. My condolences to their families in this time of grief. Sadly the violent targeting of mainstream political workers continues unabated.”