BJP blames corruption in BMC for fire at Mumbai hospital 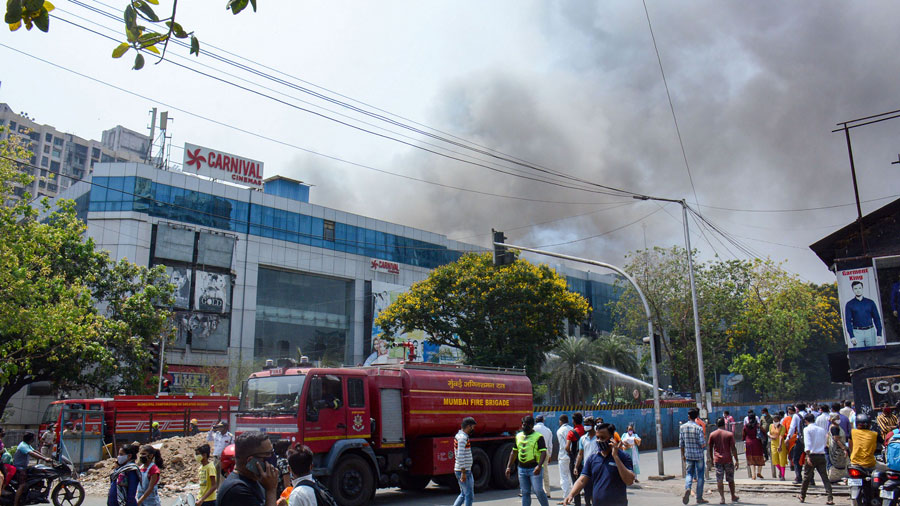 Firefighters attempt to douse a blaze at Dream Mall, affecting patients admitted in the nearby Covid-19 dedicated Sunrise Hospital, in Mumbai on Friday.
PTI
Our Bureau, Agencies   |   Mumbai   |   Published 26.03.21, 05:29 PM

BJP leader Devendra Fadnavis on Friday alleged that corruption in the Brihanmumbai Municipal Corporation (BMC) was responsible for the fire at a hospital in a Mumbai mall, which killed 10 patients.

The incident of fire occurred in Sunrise Hospital in the Dreams Mall building in Bhandup area shortly after Thursday midnight. The hospital is located on the top floor of the four-storey mall building and there were 76 patients, most of them being treated for COVID-19, when the fire broke out, officials said.

"It is the corrupt practices in the BMC that could have led to the fire incident in Bhandup mall. Why no fire audit was performed before sa COVID Care Centre was set up there?" Fadnavis asked.

"I would say that the Bombay High Court should take suo moto cognisance of the incident and probe the matter. Those from the BMC, who are responsible for the incident, should face action," the Leader of Opposition in the state Assembly said while talking to reporters here.

The state government had given assurance of carrying out safety audit of all the hospitals in the state, he said.

"Yet this incident occurred today. It means the government is not serious about public health and safety," he said.

The Shiv Sena currently rules the Mumbai civic body and also heads the Maha Vikas Aghadi (MVA) government in the state by sharing power with the NCP and the Congress.

Another BJP leader Kirit Somaiya said he would file a complaint of criminal negligence against the BMC in connection with the fire, while the Maharashtra Navnirman Sena (MNS) also sought to know how a COVID Care centre was given permission to operate in a mall.

Somaiya said the mall is an "epitome of corruption".

"I am going to file a complaint of criminal negligence against the BMC. There have been several complaints against this mall, but no action was taken against its owners," he alleged.

MNS general secretary Sandeep Deshpande claimed that the mall has not received the occupancy certificate (OC) so far and its fire audit is still incomplete.

"The mall was operational without the OC by the BMC.

The fire audit could not be completed as the fire system in place there was not satisfactory. That is why, the fire brigade did not issue a clearance certificate," he told reporters.

"I still wonder why a COVID Care Centre was set up in this mall. The local ward officer should be questioned and probed for allowing treatment of coronavirus patients at the mall," he said.

Maharashtra Chief Minister Uddhav Thackeray, who visited the spot in the afternoon, said there was approval for starting a temporary coronavirus treatment facility there.

He also announced a financial aid of Rs 5 lakh to the next kin of each deceased.