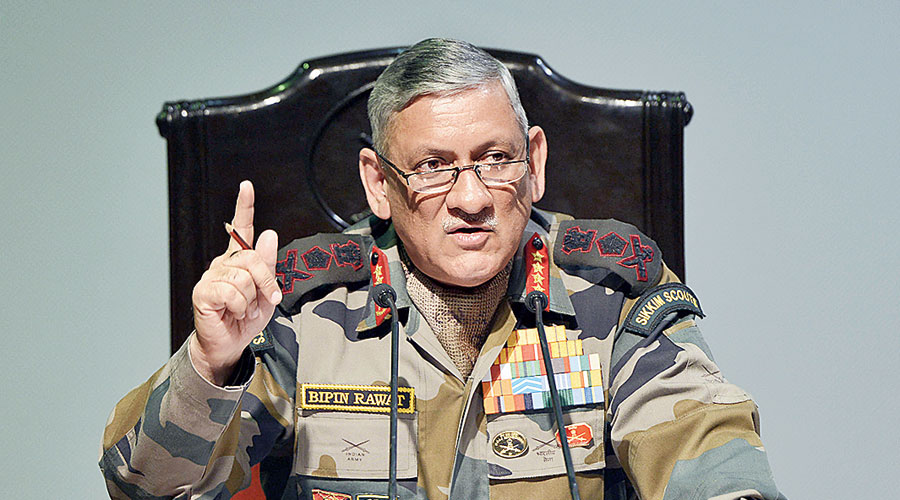 The perils of papering over border mismanagement with economic nationalism have hit home in an unlikely but telling manner.

Chief of Defence Staff Bipin Rawat has come under fire for attending an event organised by MG Motor here on Wednesday.

The cause was noble: “Putting more electric vehicles on the road.”

But the catch lay in the guardianship of the automotive company. MG Motor is headquartered in the UK but its overall ownership trail leads to China.

A day before the clean-energy event in Delhi on Wednesday, the Narendra Modi government had banned 43 Chinese mobile apps. Earlier, another 59 and 118 such apps had been banned in two tranches in measures tom-tommed by admirers of the Modi government as a stunning retaliation for Chinese aggression in eastern Ladakh.

Rawat was not alone. BJP parliamentarian Meenakshi Lekhi and Union minister of state for steel Faggan Singh Kulaste too were at the MG Motor event, which apparently was part of a central government-promoted programme on electric vehicles.

Photos tweeted by MG Motor showed Rawat in full uniform, posing with Lekhi at India Gate while flagging off a trial run by the company’s latest electric vehicle.

Lekhi heads the joint parliamentary committee on the personal data protection bill, which had taken up the issue of Ladakh being geo-tagged as part of China by Twitter.

A call and a text message to Lekhi remained unanswered. Contacted by The Telegraph, spokespersons for the defence ministry, the army and the BJP declined comment.

An army officer said: “We are very curious — why did he attend the event?”

A retired lieutenant general was furious. “What kind of message is he (Rawat) conveying to the armed forces amid one of the worst flare-ups on the China frontier?” he said.

“BJP MPs too attended the event just a day after the government banned more Chinese apps. This is ridiculous at a time the government has been asserting there cannot be business as usual in the face of Chinese attempts to unilaterally change the facts on the ground along the border.”

A Twitter user, Abhishek, wrote: “Hope Shri Bipin Rawat and Ms Lekhi know that this is a Chinese car company. While our soldiers are dying at the border our general is flagging off Chinese cars? Jai Hind.”

A tweet from MG Motor had on Wednesday said: “We are proud to participate in the first-ever tech trial run from Delhi to Agra with the MG ZS EV.”

It said the trial run “was flagged off by @M_Lekhi and General Shri Bipin Singh Rawat at India Gate today”.

A media statement from the company said the event was “part of the Government of India’s mission to put more EVs on the road by 2020”.

“Why would the CDS Gen Bipin Rawat flag off the trial run of a car produced by a Chinese-owned company... in the middle of the worst border standoff with China? Was he unaware or not briefed or it did not matter???” he wrote.

A Twitter user, Shankar Rathore, said: “Barely five months ago 20 Indian soldiers made supreme sacrifice at the Galwan Valley when Chinese troops attacked them with stone-age weapons. It is so shameful.”