Where are achchhe din? Protesters wonder 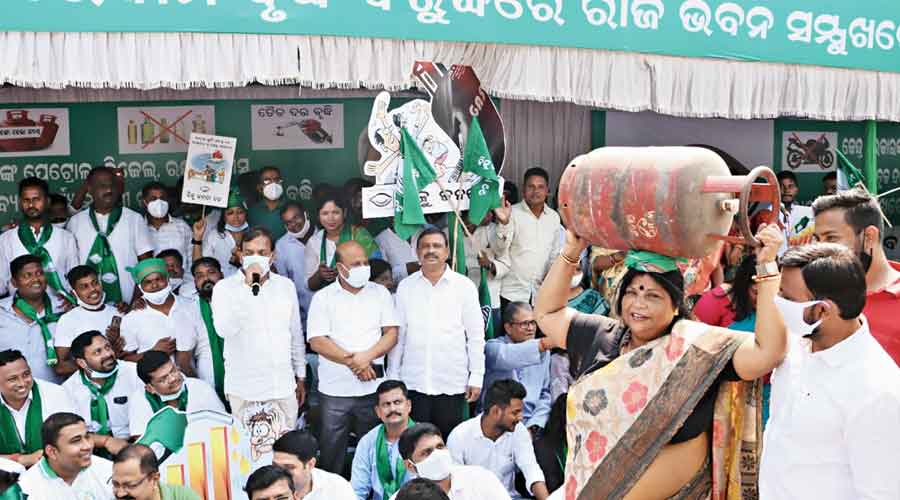 The ruling Biju Janata Dal (BJD) on Sunday launched an agitation against rising prices of fuel and other essential commodities and submitted a memorandum addressed to the President to the governor.

Hundreds of BJD workers rode cycles and rickshaws to reach the protest site near the Raj Bhavan. The women members of the party were seen cooking food in the traditional chuli instead of LPG cylinders and questioned where the “achchhe din” promised by the Narendra Modi government were.

The protest coincided with the price of petrol crossing Rs 110 per litre in Bhubaneswar and Rs 115 in the tribal-dominated Malkangiri district.

However, the BJP termed the agitation a counter-strategy to divert public attention from the Kalahandi teacher murder case. “They are in the habit of organising protests when the Opposition rakes up any issue,” BJP senior leader Prithiviraj Harichandan said.

The BJP and the Congress have been demanding the resignation of minister of state for home Dibya Shankar Mishra for his alleged closeness with the prime accused in the murder of Kalahandi school teacher Mamita Meher. The BJP on Sunday organised a demonstration under the leadership of its national spokesperson Sambit Patra in New Delhi demanding Mishra’s resignation.

Meher, 24, used to work as a teacher at a school at Mahaling in Kalahandi district where Gobinda Sahu, alleged to be close to the minister, was the managing committee president. Mamita went missing on October 8 and her body was exhumed from an eight-feet deep pit on October 19. Sahu, who has been arrested, has confessed to his crime. The Opposition has accused the minister of trying to shield the accused and demanded his resignation.

The BJD, however, has made it clear that it would intensify its agitation on the price rise issue. “The price of a cooking gas cylinder has touched Rs 1,000. Its going to increase further, making the life of women miserable,” said senior party MLA Snehangini Chhuria.

Former minister Atanu Sabyasachi Nayak said: “People even find it tough to go to hospital using a motor cycle as they are unable to buy petrol. The Centre has failed to keep fuel prices in check.”

The BJD will organise protest rallies in all the 147 Assembly constituencies on Monday. The party will also hold dharnas in front of all the petrol pumps across the state for three days from November 5.

However, the Congress questioned why the ruling BJD had remained silent on the price rise for so many days.