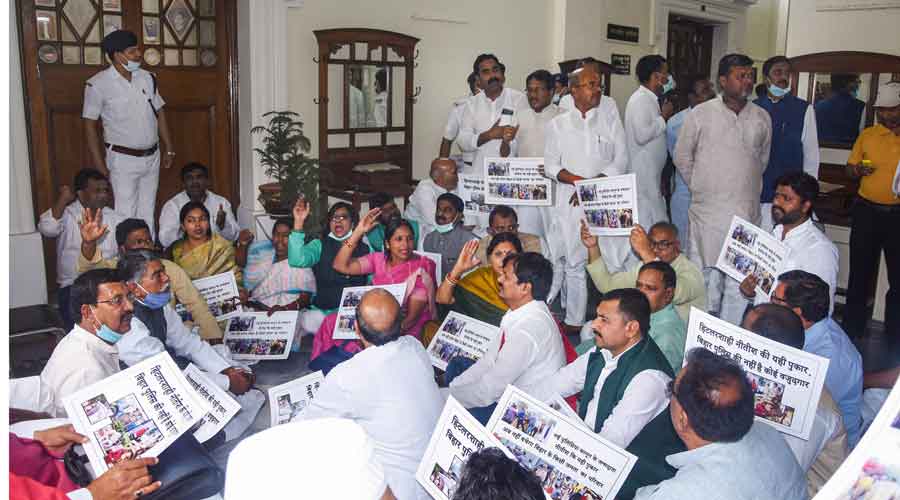 Unprecedented chaos erupted inside the Bihar assembly on Tuesday when police was called inside to assist the marshals in evicting unruly opposition members who tried to physically prevent the Speaker from taking his Chair.

Sources in the five-party Grand Alliance said on condition of anonymity that there were instructions from "leadership" that the House must not be allowed to function on the penultimate day of the month-long budget session.

The bone of contention was Bihar Special Armed Police Bill, 2021, which the Nitish Kumar government has introduced in a bid to give its police more teeth, deemed necessary in view of the increasingly complex security needs of the state which has been witnessing rapid economic growth.

The opposition, however, termed it as a "black" legislation, taking strong exception to provisions that empower the Special Armed Police, previously known as the Bihar Military Police, to conduct searches and arrests without producing a warrant.

The Bill was, nonetheless, passed by the assembly late in the evening, well past the stipulated time, amid a "walkout" by opposition MLAs who squatted outside the building and raised slogans, slighted by the manner in which they were ousted from the hall by the men in uniform.

Things had come to the pass after the Speaker was thwarted from taking his seat by a handful of women legislators of the RJD who had clambered on to the podium even as many other MLAs created ruckus in the well, threw away the chair of the Vidhan Sabha secretary and prevented staff from bringing in another piece of furniture.

Tempers flared up in the treasury benches as well. The normally affable cabinet minister Ashok Choudhary was seen getting physical with an RJD MLA who tried to snatch away the papers from BJPs Prem Kumar, who occupied the chair while Speaker Vijay Kumar Sinha took his time to recover from the shock over the turn of events during the day.

Sinha had around 3 P.M. adjourned proceedings till 4.30 P.M., for the umpteenth time during the day.

He was held hostage inside his chamber by opposition legislators who surrounded it from all sides preventing his exit.

Top officials of the district and police administration had to contend with an RJD procession led by Tejashwi Yadav earlier in the day, taken out in protest against the bill and rising unemployment, which resulted in injuries to many protesters and police officials as stones were hurled and lathi charge use of water cannons was ordered.

The Dak Bungalow crossing, where the protestors clashed with the police upon being prevented from marching to the assembly, witnessed lawlessness as vehicles parked by the roadside were vandalized and many journalists covering the event also suffered injuries.

The officials were summoned to the Vidhan Sabha premises in the afternoon to rope in police personnel for helping the marshals who were far outnumbered by the legislators laying siege to the Speakers chamber.

A few MLAs of the RJD and its ally CPI(M) fell unconscious outside the Vidhan Sabha premises where they were dumped by the security personnel. Later, they alleged that they were "severely beaten up".

Another RJD MLA appeared before the camera with his hand wrapped in plaster and declared "members of the ruling coalition broke my arm in presence of the Chief Minister who chose to look away".

Disturbing images of some legislators being pulled by the hair and kicked and male police personnel dragging a female MLA have also gone viral on the social media.

Tejashwi Yadav, who was inside the Vidhan Sabha premises in the afternoon, having spent the first half leading the procession and courting arrest, tweeted angrily "Nitish Kumar, if you are indeed a man, get us shot instead of getting us beaten up".

It was a day of uncharacteristic anger shown by the cool- headed young leader who was seen engaged in an angry spat with an Additional SP in the evening after the police was done with helping the marshals in eviction of problematic opposition legislators.

Chief Minister Nitish Kumar, who witnessed many of the unsavoury incidents with distaste, said "there seem to be many new legislators who need to be trained in parliamentary behaviour.

"Had the opposition allowed the House to run, the government would have addressed its concerns. But, that opportunity was frittered away".

The Speaker, visibly shattered by the utter chaos of which he happened to be at the receiving end, said before winding up, "many unfortunate things have happened. This cannot be allowed to recur.