Even as he has attacked Nitish, Chirag has continued to praise the BJP, to the extent of describing himself as Modi’s ‘Hanuman’ 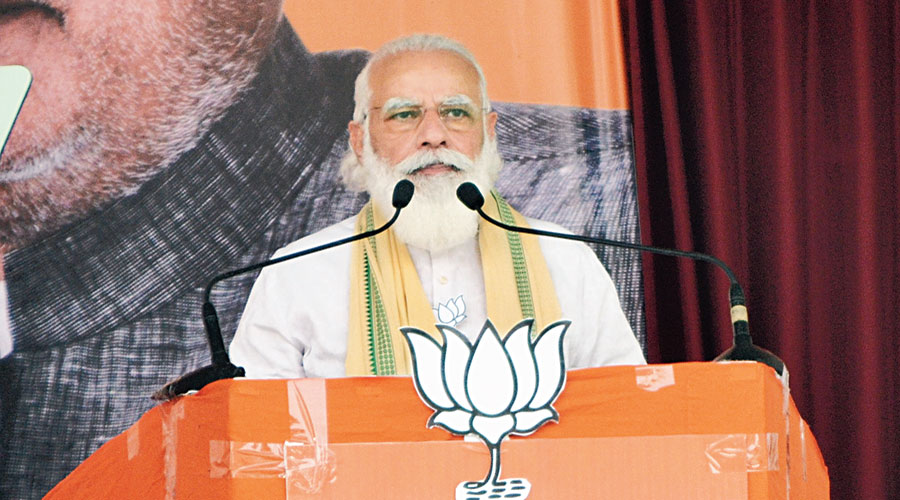 Prime Minister Narendra Modi began his speech on Friday at his first campaign rally in Bihar with a tribute to “close friend” Ram Vilas Paswan, whose son and political heir Chirag has been relentless in his attacks on chief minister Nitish Kumar.

“Bihar has recently lost two of its worthy sons who served the people of the state for decades. I pay my tribute to Ram Vilas Paswan, my close friend who dedicated his life to the poor and the Dalits and stayed with me till the end, till his last breath,” the Prime Minister said at Sasaram in Rohtas district, as Nitish stood by his side on the dais.

The tribute to Paswan at the start of his speech at a rally that was expected to be a show of unity between the BJP and the Janata Dal United further fuelled speculation that Chirag’s attacks on Nitish — the chief ministerial candidate of the National Democratic Alliance — have the backing of the BJP’s top leadership.

Chirag has fielded candidates of his Lok Janshakti Party in 136 Assembly seats, including almost all the seats from which the JDU is contesting. Several BJP leaders, including some sitting and former MLAs whose constituencies went to the JDU in the seat-sharing agreement, are contesting on LJP tickets.

Even as he has attacked Nitish, Chirag has continued to praise the BJP, to the extent of describing himself as Narendra Modi’s “Hanuman”.

Speculation has been persistent that the BJP has propped up Chirag to undermine the JDU and reduce its seat tally, and clarifications by senior BJP leaders that the LJP was not an ally in the state have failed to put the lid on it.

The JDU and the BJP agreed to contest 122 and 121 Assembly seats, respectively. However, the JDU has given seven seats from its share to former chief minister Jitan Ram Manjhi’s Hindustani Awam Morcha Secular, and the BJP has parted with 11 seats in favour of Bollywood set designer Mukesh Sahni’s Vikassheel Insan Party (VIP).

“Modi’s praise for and tribute to Ram Vilas at this juncture when the elections are just five days away have destroyed all the hard work done by us and other BJP leaders to drill into the psyche of voters that Chirag and his LJP are not part of the NDA, and that voting for them would be akin to voting against the alliance. This situation could have been avoided,” a senior JDU leader said on the condition of anonymity.

Modi subtly chipped away at Nitish during his speech. He praised the work done in Bihar to counter the coronavirus pandemic by “the NDA government under Nitishji’s leadership”. The Prime Minister spoke about the development of Bihar over the past 15 years but again did not give individual credit to Nitish. The chief minister, however, while recounting the progress made during his term and in the fight against Covid-19, kept praising the assistance provided by the Centre.

Modi alleged that the 10-year UPA rule at the Centre had put obstacles in the development of Bihar. “Though we came to power at the Centre in 2014, in reality our ‘double engine’ government has got just around three to four years to work with Nitishji for the development of Bihar,” Modi said, drawing a distinction with the two years from 2015 when Nitish was part of the Grand Alliance.

Modi closed his speech by saying that “the NDA government under Nitish Kumar in Bihar is necessary to strengthen the resolve for an Aatmanirbhar Bharat”.