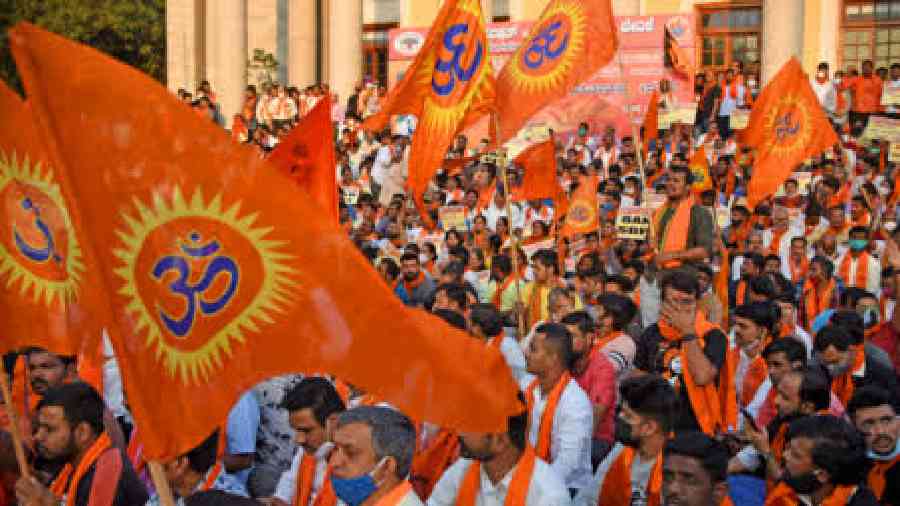 Video clips circulating on social media showed members of Bajrang Dal shooing away the students who were seen scurrying out of the building on Monday.
Representational picture
K.M. Rakesh   |   Published 27.07.22, 03:02 AM

The activists from the Sangh parivar organisation turned up at Re-Cycle-The Lounge in the heart of Mangalore city at around 9pm on Monday and told a bouncer to evict the students and stop their party alleging they were engaged in illegal activities.

Mangalore police commissioner N. Shashi Kumar, who visited the spot on Tuesday, said statements of the bouncer and other staff members of the pub were recorded as part of the investigation. “We are checking the security camera footage and will take appropriate action. No one, except the authorities concerned, have the right to ask for their identity cards or check the licence,” he said, alluding to the activists who demanded to see the licence of the establishment.

In 2009, the same pub, then known as Amnesia Pub, was the target of a vigilante attack by Sree Rama Sena. The activists had dragged women out of the pub, beaten and molested them in one of the most notorious incidents of moral policing in Karnataka. But a Mangalore court had in 2018 acquitted 25 accused, including Sena leader Pramod Muthalik, for lack of evidence.

Video clips circulating on social media showed members of Bajrang Dal shooing away the students who were seen scurrying out of the building on Monday.

The incident, which brought back memories of the 2009 attack that paved the way for innumerable acts of moral policing by the Sangh parivar outfits, was condemned by the Janata Dal Secular.

Akshith Suvarna, the party’s youth wing president of Dakshina Kannada district, of which Mangalore is the headquarters, called for banning organisations that indulged in such acts of moral policing and invasion of privacy.

“Any organisation that invades people’s privacy must be banned. Who gave them the authority to stop parties? What’s wrong if students go out for dinner? These incidents bring a bad name to the district and have deterred investments,” Suvarna told reporters in Mangalore on Tuesday.

The incident comes just days after the Vishwa Hindu Parishad alleged that students of a reputed college in Mangalore were engaged in illegal activities involving sex and drugs. The organisation had even circulated a poster with the claim on June 22.

A day before the VHP statement, Mangalore police had booked eight students of the college under the Pocso Act after two of them were seen smooching in a video shot at an apartment in the city. Police later found that the minor students were engaged in a “truth or dare” game and one of them was seen kissing his female classmate. The college has since suspended the students.