if my words hurt anyone, I hereby apologise, Samajwadi MP says 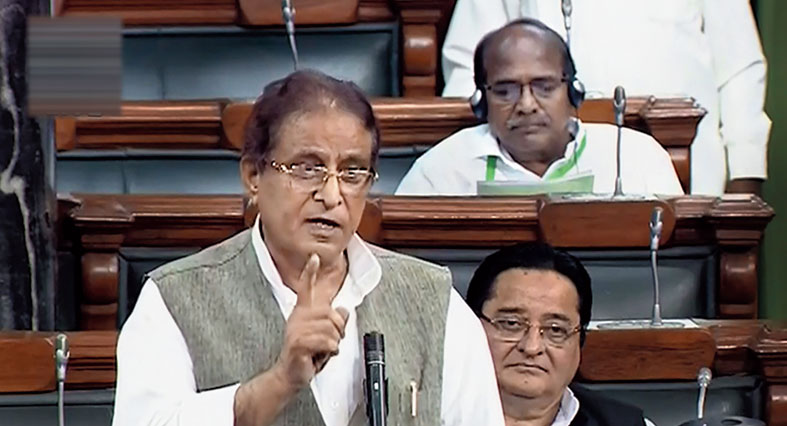 Devi was officiating the House last Thursday when Khan made a remark at her that sparked an uproar in the House.

As soon as the Lok Sabha met after the weekend, Speaker Om Birla allowed Khan to speak in the House.

'I have been an MLA nine times, a minister several times, a Rajya Sabha member too. I was a parliamentary affairs minister too. I know legislative procedures,' he said. 'However, if my words hurt anyone, I hereby apologise,' he said.

As some of his words were inaudible, parliamentary affairs minister Pralhad Joshi said Khan should repeat the sentence as the House could not understand what he had actually said.

With this, SP president and former Uttar Pradesh chief minister Akhilesh Yadav, who was sitting next to Khan, stood up to say that the Rampur MP had already apologised in the House in proper words and he can vouch for it.

Yadav also referred to the Unnao rape survivor, who had met with a serious accident yesterday and was hospitalised, and said the House should also talk about it, inviting loud protests from the treasury benches.

BJP MLA Kuldeep Singh Sengar is an accused in the rape case.

Devi said Khan has the habit of uttering derogatory words against women and had done so in the past outside the House. Now he has said them inside the House, she said.

After this, the Speaker asked Khan to tender the apology again.

Khan repeated the words and said Devi was like his sister. 'If my words hurt anyone, I apologise,' he said.