At Allahabad park, a mini-Shaheen

Over 200 women on dharna against CAA, NRC 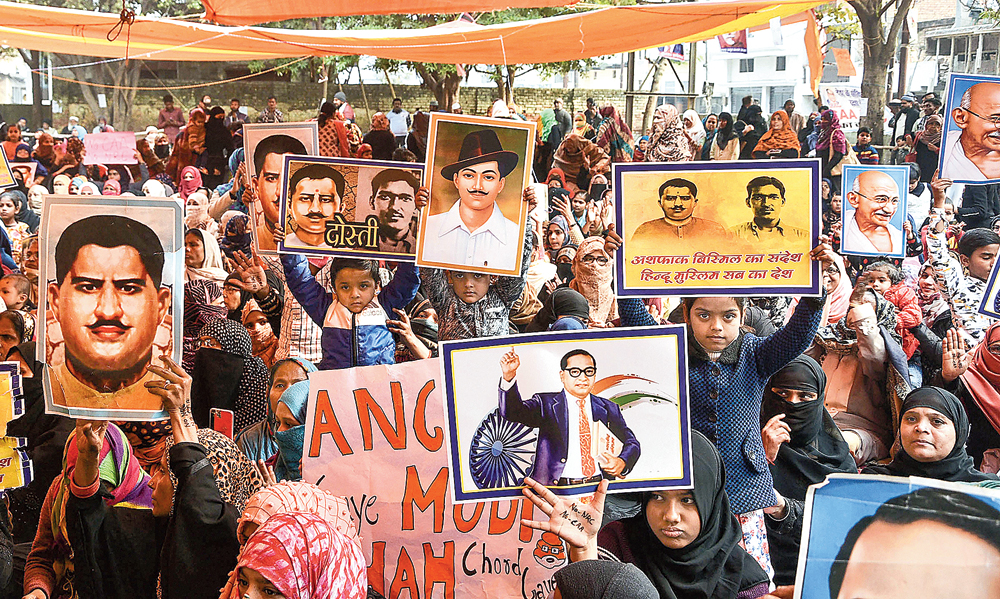 More than 200 women have been occupying the Mansoor Ali Park in Allahabad City since Sunday afternoon in protest against the Citizenship (Amendment) Act and the National Register of Citizens, braving the cold and drawing inspiration from Shaheen Bagh in Delhi.

The police have coaxed and threatened them but the women have continued their four-day-old, round-the-clock dharna in violation of Section 144, CrPC, imposed across Allahabad City since December 19.

Eyeball to eyeball with the large police and paramilitary teams deployed to watch them, the women have been sitting and sleeping in the open, on mats, rugs and bed sheets spread across the park’s grassy middle. They have left the paved walk along the perimeter free for morning walkers.

Like Shaheen Bagh, the overwhelming majority of the protesters are women — poor and middle-class Hindus and Muslims from the neighbourhood. Some 50 children are sitting in protest too, or scurrying about fetching water bottles and food packs from home for their mothers and aunts.

About 20 men have joined the sit-in at the park, the size of a football ground and located in Allahabad’s Roshanbagh Colony, while university students keep coming and going, expressing solidarity.

“We are not against any government or party. We are against the distortion of the secular fabric of the Constitution, which Babasaheb Bhimrao Ambedkar gave us,” said Rubina Begum, a protester in her 40s.

“We are all from adjoining areas. Some 60 per cent of the protesters are Muslim and 40 per cent are Hindus. Students of the University of Allahabad are here too.”

So far, the government’s pressure tactics have failed. Senior administration officials met the protesters on Tuesday and again on Wednesday morning but returned disappointed.

“They first told us the morning walkers were feeling uncomfortable with all the noise. Then they threatened arrest,” said Razia Begum, a middle-aged protester.

“Then they reminded us of the fate of the anti-CAA protesters in Kanpur, Lucknow, Firozabad and Meerut. We told them they could shoot us; we wouldn’t leave till the government withdrew the (amended citizenship) act.”

Nineteen people have died of bullet injuries across the state, many of them at the places Razia mentioned — although the police have denied firing on the crowds and blamed the shooting on “criminals” among the protesters themselves. Allahabad City witnessed a protest on December 20 but no shooting.

On Wednesday, some of the children were holding up placards carrying slogans such as “Stop communal politics”, “Ready to die but not ready to accept CAA and NRC” and “I’m alive because I’m speaking out”.

Some of the placards carried poems, including the freedom struggle anthem “Sarfaroshi ki tamanna ab hamare dil mein hai/ Dekhna hai zor kitna baju-e-qatil mein hai (The desire for revolution is now in our hearts/ Let’s see how much strength the enemy has)” and Habib Jalib’s “Aise dastoor ko, subh-e-be-noor ko/ Main nahin manta, main nahin janta (This rule, this faded morning, I don’t accept it, I don’t recognise it)”.

“I have enough certificates to prove I’m a citizen of India but a large number of our brothers and sisters, living here since generations, haven’t. I’m fighting for their future,” said forty-something Sabina Ahmad.

“We have been sleeping under the open sky, hoping the government would realise its blunder and correct it.”

Neha Yadav, a protester in her late 20s, said: “We have resolved to organise a peaceful protest and keep at bay those who take the law into their own hands.”

Busra Khan, 15, who was rushing into the park with water bottles, said: “We want the people on dharna to be in good health.”

Brijesh Kumar Srivastava, additional superintendent of police, Allahabad, said the force was keeping a close watch. “We are repeatedly appealing to the protesters to leave the park,” he said.