In a recent TV interview, Ramdev described followers of Ambedkar, Lenin, and Periyar as 'intellectual terrorists' 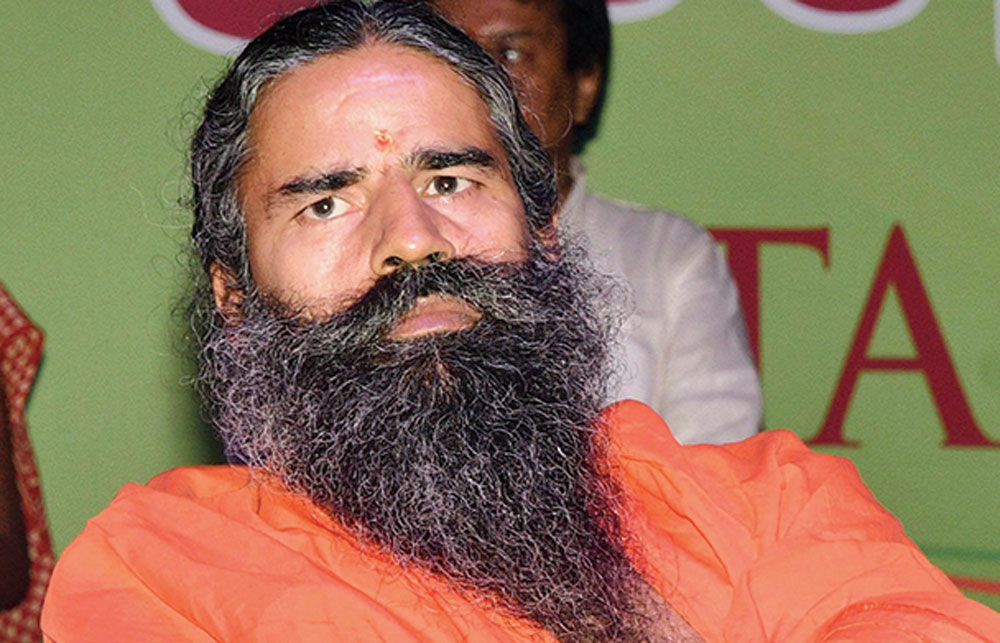 In an interview on November 11 to Republic TV, Ramdev called that followers of Ambedkar and Periyar are indulging in 'vyacharik aatankwaad' (intellectual terrorism)
Telegraph file picture
The Telegraph   |   New Delhi   |   Published 17.11.19, 01:03 PM

Twitter users on Sunday protested against remarks allegedly made by Patanjali Ayurved co-founder Ramdev against followers of social activist Periyar and Dr B. R. Ambedkar, resulting in hashtag #arrestRamdev trending on the micro-blogging site.

In an interview on Monday, November 11, 2019, to Republic, Ramdev called that followers of anti-caste leaders B.R. Ambedkar and Periyar E.V. Ramaswami are indulging in vyacharik aatankwaad (intellectual terrorism), a term he claimed to have coined himself.

However, on Sunday, November 17, responses became relatively serious with people demanding his arrest for his alleged remarks. Trending hashtags also called for a boycott of Patanjali products.

Journalism professor Dilip Mandal, who has used his Twitter page to raise awareness on Dalit issues, shared several tweets on the issue. Political activist Hansraj Meena shared a video clip of the interview, saying that abusive statements on Periyar and Ambedkar, and calling 'us intellectual terrorists' cannot be tolerated.

Other Twitter users also shared their views on the issue, demanding Ramdev's arrest and calling for a boycott of Patanjali products.

Ramdev has insulted our great Periyar Ambedkar Birsa . We must boycott him and his products. We should sue him too. We want #ArrestRamdev .
.
🙏जय भीम जय पेरियार जय बिरसा 🙏#BoycottPatanjaliProducts#shutdownPatanjali #Ramdev_Insults_Periyar

There is a stigma in the name of Ramdev Yadav.He is a slave of the Confederates.He is a traitor born in Bahujan.All Bahujans should give an agreement to this so that no one can dare to abuse our great men.Make the ears fun#shutdownPatanjali #Ramdev_Insults_Periyar#ArrestRamdev pic.twitter.com/Wi5QrTFkBi

What is intellectual terrorism according to Ramdev

Now Ramdev has crossed all the limits of sycophancy. He always speaks against the bahujan community, which he belongs himself. Now he has insulted our great icons. He should be detailed and prosecuted. @dilipmandal#arrestramdev pic.twitter.com/v7N8oWVBYZ

As #ArrestRamdev, #BoycottPatanjaliProducts and #RamdevInsultsPeriyar trended, another hashtag #Salute_Baba_Ramdev began appearing on the micro-blogging website. A few users, including Mandal, called it the handiwork of the BJP IT cell.

Many users found ways to troll Ramdev over the issue.

Why people are trending #ArrestRamdev ?
Anyway Arrest him For Cheating and Fooling we Indians with Concept like Black Money & Desi products and his fake Ayurveda medicines.#Ramdev_Insults_Periyar #ArrestRamdev #RamdevChorHai pic.twitter.com/1tuTWwh56r

In the TV interview, Ramdev had said that followers of Periyar have increased negativity. 'Supporters of Periyar say that people who follow gods are fools, those who worship him are miscreants, and that God is evil, and such rubbish.'

Ramdev went on to claim that we don't need Lenin, Marx and Mao, and said that they had views that went against Indian culture. He referred to their followers as 'so bad'.

Later in the interview, he claimed that the followers of those people were 'dividing' the nation, and he had coined a term for them: intellectual terrorists.