For the BJP, sources said, the former CM who is seen as unpopular in Punjab may not be a big catch but he could serve their interest of damaging the Congress 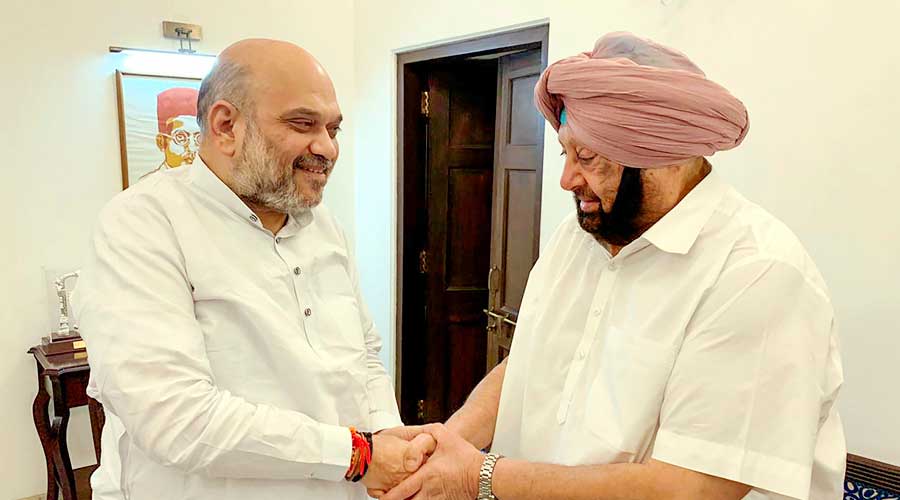 Amarinder Singh called on Amit Shah on Wednesday evening as the political motives of the two appear to have converged, with both seeking to damage the Congress.

Amarinder, 79, who found himself cornered in the Congress and had to quit as chief minister earlier this month, drove to the Union home minister’s Krishna Menon Road residence around 6pm. He left after nearly 45 minutes, exiting from a second gate to avoid the media.

On Tuesday, as he left for Delhi from Chandigarh, he had denied speculation that he would be meeting top BJP leaders in the capital. Amarinder had said he was on a personal visit.

On Wednesday, he tweeted: “Met Union Home Minister Amit Shah in Delhi. Discussed prolonged farmers agitation against farm laws and urged him to resolve crisis urgently with repeal of the laws and guarantee MSP, besides supporting Punjab in crop diversification.”

Met Union Home Minister @AmitShah ji in Delhi. Discussed the prolonged farmers agitation against #FarmLaws & urged him to resolve the crisis urgently with repeal of the laws & guarantee MSP, besides supporting Punjab in crop diversification. #NoFarmersNoFood

It will not be a surprise if Amarinder joins the BJP. After he quit as chief minister, the seething army veteran has said he had been “humiliated” and that his political options were open. Although he has not yet quit the Congress, he threatened to field a strong candidate against party colleague Navjot Singh Sidhu, making it clear he intends to hurt the party’s electoral prospects.

For the BJP, sources said, the former chief minister who is seen as unpopular in Punjab may not be a big catch but he could serve their interest of damaging the Congress, the Gandhi family in particular.

“It’s a convergence of Captain sahab and our political interests,” one BJP leader said while the meeting at Shah’s residence was on.

The BJP on Wednesday accused Rahul Gandhi of hurling Punjab into instability. “Whatever is happening in Punjab is due to a colossal failure of Rahul Gandhi,” BJP spokesperson Sambit Patra said, stressing that instability in the border state of Punjab was a matter of concern for the country.

Amarinder and some critics of the party high command in the Congress too have been flagging the national security angle, a pet political tool of the BJP, and underlining that Punjab borders Pakistan.

BJP-ruled Gujarat too is a border state that has had its chief minister changed suddenly. This month, heroin said to be worth Rs 21,000 crore was seized from Mundra port in Gujarat in the biggest such haul in the country.

The biggest hurdle in the path of Amarinder embracing the BJP appeared to be the ongoing farmers’ protest against the three farm laws brought by the Narendra Modi government. “If Captain joins the BJP, he will face the anger of Sikh farmers who have been leading the farm protests,” a Punjab MP said.

BJP insiders indicated that Shah was trying to explore a solution to the farmers’ agitation to give Amarinder some political heft and then use him in the upcoming Punjab polls. The BJP has been traditionally weak in Punjab and has been looking for a credible Sikh leader.

The farmers’ protest has also got tied to Sikh pride and Amarinder will need to negotiate the issue if he plans to join the BJP and remain politically relevant in Punjab.

There was also speculation about Amarinder exploring the possibility of floating his own party and splitting the Congress to pull down the government in Punjab with the help of the BJP. This project too serves the purpose of harming the Congress.