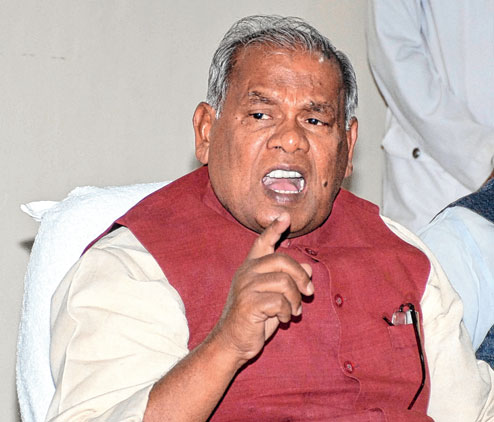 The Bihar Opposition alliance on Wednesday held its first pre-election meeting amid suspicion over the intentions of a restive partner although the theme was solidarity among the allies and the focus was on ousting the NDA government.

Sources said there were misgivings about Hindustani Awam Morcha (HAM) leader and former chief minister Jitan Ram Manjhi as a view had been gaining ground that he could defect to the BJP-JDU camp in the next few days. Bihar is set to go to polls later this year.

Several leaders in private questioned the desirability of calling a meeting at this stage. A Congress leader from Bihar told The Telegraph over phone from Patna: “Manjhiji is in the departure lounge and we are planning strategy with him. Our political acumen has dipped so low.”

The suspicion deepened when Manjhi launched an attack on the RJD at Wednesday’s meeting, accusing the leading partner in Bihar of “arrogance and unilateralism”.

Although Tejashwi Prasad Yadav, the leader of the Opposition in the Assembly, was not present at the meeting ostensibly because he had got tied up with sudden political developments triggered by defections of Legislative Council members of the RJD, sources said Rajya Sabha MP Manoj Jha chose not to counter Manjhi.

Congress leaders tried to pacify everybody, insisting that unity among allies was the prerequisite for mounting a credible challenge to the ruling alliance.

Although Congress president Sonia Gandhi did not attend the meeting, the party was present in full force, disproportionate to its political clout in Bihar. The Congress knows the importance of its role in keeping the flock together despite being a fringe player in the state.

The Congress dominated the meeting with Ahmed Patel, K.C. Venugopal, Shaktisinh Gohil, Madan Mohan Jha and Sadanand Singh in attendance. Rashtriya Lok Samata Party (RLSP) chief Upendra Kushwaha and Vikashsheel Insan Party (VIP) president Mukesh Sahni echoed the Congress line of forging solidarity to oust the BJP-JDU.Congress Bihar in-charge Shaktisinh Gohil told The Telegraph: “The meeting was held in a cordial atmosphere. Our objective is to remove every hurdle in the way to ensure total unity among the allies. We are very sure of being able to project a formidable combination as the people of Bihar are desperately waiting for a change.”

“The BJP-JDU government is immensely unpopular and a strong anti-incumbency is going to knock them out. The recent mismanagement of Covid-19 and the subsequent humanitarian crisis has further pushed them out of reckoning. In this political ambiance, no issue will be allowed to disturb our alliance.”

One thorny issue, however, is the possible projection of Tejashwi as the chief ministerial candidate. While Manjhi is strongly opposed to such a proposition, some other allies also nurture inhibitions about fighting the election under the young leader’s command.

For the RJD, Tejashwi’s leadership is non-negotiable and the party firmly believes that its cadre needs his projection as the chief ministerial candidate for maximum mobilisation.

Some leaders, however, believe the ruling combine may scrape through despite extreme unpopularity if the election becomes a personality clash between chief minister and JNU president Nitish Kumar and Tejashwi.