The gathering was hosted by the Desh khap, the second largest of 32 khaps across Uttar Pradesh and Haryana, on the birth anniversary of Raja Salakshanpal Tomar 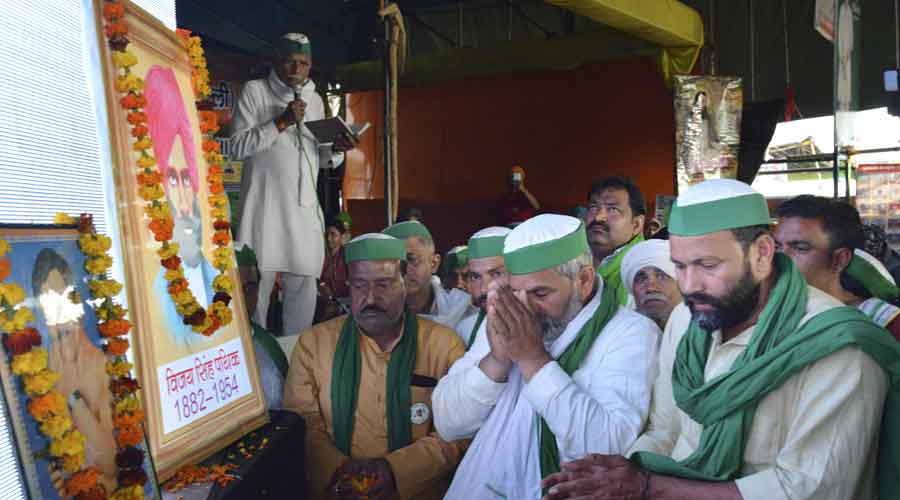 A mahapanchayat against the three farm laws in Uttar Pradesh’s Baghpat district saw several leaders not usually seen together drop their differences and share the same platform.

The gathering was hosted by the Desh khap, the second largest of 32 khaps across Uttar Pradesh and Haryana, on the birth anniversary of Raja Salakshanpal Tomar.

The khaps, the BKU and the RLD have been separately organising rallies across Uttar Pradesh against the three farm laws. Despite the common goal to make the Narendra Modi government repeal the controversial laws, they were avoiding being seen on the same platform.

Gajendra Chaudhary, convener of the programme, said: “Salakshanpal was a king of 10th-11th century who protected every caste and community in Delhi and adjoining areas. That’s why we decided to organise his birth anniversary on a bigger scale this year and bring the majority of the anti-farm laws forces together. They agreed immediately.”

They organised a hawan from 8.30am to 10.30am in the presence of the head of Desh khap Chaudhary Surendra Singh and Rakesh Tikait before the mahapanchayat started.

“We are all present at the dharna sites on the Delhi border for around the last 100 days. This togetherness is the need of the hour in our rallies too. We will try to organise more such joint rallies in the coming days in which all 32 khaps would participate”, said Surendra Singh.

The Tomar dynasty had ruled over Delhi and adjoining areas sometimes between the 8th century and 11th century. Salakshanpal (979-1005 CE) was one of the kings of the

dynasty. “Salakshanpal fought many battles and won. His son Deshpal Tomar was chaudhary (head) of Desh khap, which belongs to Tomar Gotra. Later on, the Tomars gradually shifted from Delhi via Rohtak (Haryana) and settled in Baraut area of Baghpat,” Singh added.

The Rajputs and Gujjars, who constitute a major part of the population of western Uttar Pradesh, consider Tomar kings as their ancestors.

“The farmers have no option other than death if their demand to repeal the farm laws is not met,” said Rakesh Tikait.

“The Centre will destroy farmers and farming if we allow them to go ahead with the three farm laws. This is why we are consolidating ourselves to fight a battle till the farmers win,” said Ajit Singh.

However, Dharmendra Malik, a senior BKU leader, said this should not be seen as a joint rally. “It was essentially organised for a hawan on the birth anniversary of a Tomar king. Those who reached there were invited by Desh khap and they were guests there. It was not a political platform. But we have no plan to hold joint mahapanchayats as such,” he claimed.

“It happens that all these groups come together on certain occasions. They all had assembled in Sisauli village in 2008 when the then chief minister Mayawati had wanted the police to arrest Mahendra Singh Tikait (founder of the BKU),” Malik added.