Airport showdown in Kerala over Adanis

CM informs PM ‘difficult to cooperate’ with lease; Cong and Left on same side but not Tharoor 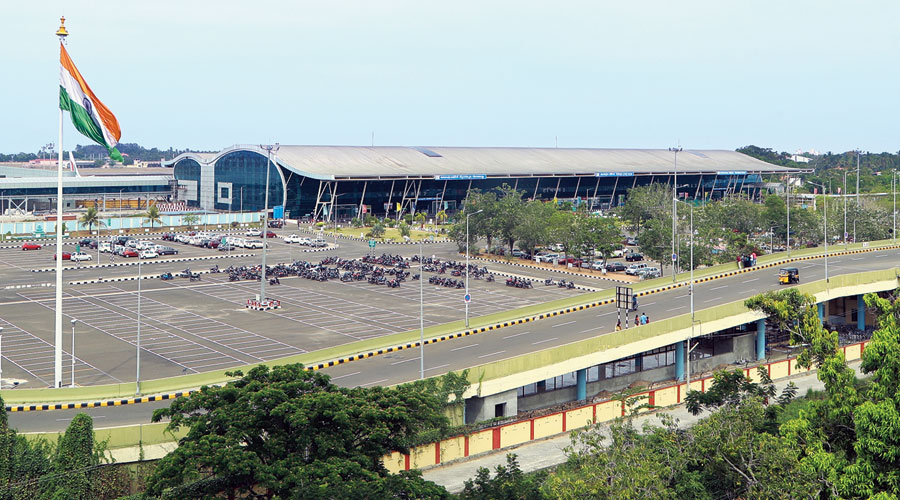 The Adani group’s proposed takeover of the Thiruvananthapuram International Airport, cleared by the Union cabinet on Wednesday, has hit political headwinds with the Left government in Kerala and the Opposition Congress coming together to resist the privatisation of the public sector facility.

The showdown comes at a time the CPM-led government is caught in a scandal over a gold smuggling racket in which a key accused has been linked to a top IAS officer who enjoyed immense clout in the chief minister’s office.

The battle has a few unusual dimensions. The Kerala government itself had taken part in the airport bid and lost to the Adanis. If a private party that lost a tender had sought to block the winner, it would have had other implications.

Another stand-out factor has been the decision of Congress leader and Thiruvananthapuram MP Shashi Tharoor to swim against the political tide with which his own party is moving. “The people of Thiruvananthapuram want a first-class airport worthy of the city’s history, status and potential. In this context, a decision, however controversial, is preferable to the long delay we have suffered,” Tharoor said.

Chief minister and CPM leader Pinarayi Vijayan on Wednesday wrote to Prime Minister Narendra Modi, stating that it would be difficult for Kerala to cooperate when a decision goes against the people’s wishes. Vijayan also requested the Prime Minister to reconsider the decision to lease the airport to Adani Enterprises under a public-private partnership model for 50 years.

“In view of the unilateral decision taken by the government of India without giving credence to the cogent arguments put forward by the state government, it will be difficult for us to offer cooperation to the implementation of the decision, which is against the wishes of the people of the state,” Vijayan wrote.

The Kerala government on Thursday held an all-party meeting, chaired by Vijayan, to discuss and protest against the Centre’s decision. So far, the sole party that has backed the planned takeover by the Adanis is the BJP.

The Ahmedabad-based Adani group had last year won the rights to operate the airports at Thiruvananthapuram, Ahmedabad, Lucknow, Jaipur, Guwahati and Mangalore, which are now run by the Airports Authority of India (AAI). The Union cabinet on Wednesday approved the proposal to lease out the airports at Jaipur, Guwahati and Thiruvananthapuram through the PPP model.

The Centre remained firm on its stand on Thursday.

Minister of state for external affairs V. Muraleedharan told a media conference in New Delhi: “Neither the Supreme Court nor Kerala High Court has objected to proceeding with the agreement (with Adani). Any further decision to stop the deal will be taken on the basis of the high court’s order.”

The Kerala government and the Airport Employees’ Union had challenged in the Supreme Court the authority of the AAI to lease the facility to a corporate company.

The apex court had sent the case back to Kerala High Court, which has not been able to take up the matter because of the pandemic-induced lockdown.

Asked how prudent it would be to hand over a profit-making airport to the Adani group that has yet to take over the Ahmedabad, Lucknow and Mangalore airports even after signing the binding concession agreement on February 15, Muraleedharan said: “Each of the airports is an independent bid.”

The Adani group was supposed to execute the final agreement with the AAI in 180 days and take over the airports in another 45 days.

The airport at Thiruvananthapuram, the state’s first, was established in 1932 by Col. Goda Varma Raja, the consort prince of Travancore queen Karthika Thirunal. While the first flight took off from the airstrip on November 1, 1935, carrying mail to the then Bombay, it became a domestic airport after Independence. It was accorded international airport status in 1991, although international operations had been initiated by Air India to West Asia in the late 1970s.

The CPM state secretariat on Thursday urged the Centre not to hand over the airport to the Adani group and echoed the state government’s proposal to modernise it on the lines of the international airports at Kochi and Kannur.

“Strong protests have to rise against the Modi government’s decision to hand over the airport worth Rs 30,000 crore to Adani. The Kerala people will never allow this airport to be Adani’s,” the party said in a statement.

“The airport has an annual profit of Rs 170 crore,” the CPM said, adding that the state government had over a period of time acquired land for its expansion.

People of Kerala will not accept this act of brazen cronyism. #Airportprivatisation,” Kerala finance minister Thomas Isaac tweeted on Thursday.

Tharoor’s stand has courted controversy. “My position on the airport has been consistent since before the elections. I am not a politician who says one thing to the voters and something else afterwards for political convenience,” he tweeted on Thursday.

He also had a word for his party colleagues who have opposed the handover to Adani. “Had my colleagues consulted me before taking a negative stand, I would have explained my views to them. I am speaking in the best interests of my constituency. As its MP, that is my job,” Tharoor tweeted, tagging the Kerala unit of the Congress.

But the Congress made it clear that it would not support the takeover.

“The Centre has ignored the Kerala government’s objections and offers to run the airport while handing it over to Adani,” he said. “This takeover will be stopped at any cost.

We will stage strong protests in and outside Parliament,” Venugopal added.

The leader of the Opposition in the Kerala Assembly, Ramesh Chennithala of the Congress, said “the dictatorial act” could not be allowed and “must be resisted”.

“The Union Government’s decision to award operations of Trivandrum Airport to Adani Group on a 50-year lease amidst the Covid crisis is a deplorable move. The airport is the state’s property, and must not be privatised,” he tweeted.

“The decision to go for PPP mode despite state govt’s readiness to operate and manage the airport shows how the Central Govt is trying to use the Covid pandemic to hand over all PSUs to the private sector,” Chennithala added.

The Thiruvananthapuram district secretary of the CPM’s Centre of Indian Trade Unions, V. Sivankutty, told The Telegraph that they would stand by the state government’s efforts to stop the takeover.

“The Kerala government cannot even think of handing over the airport to Adani, and Citu will back that position,” he said. “We won’t cooperate with the necessary land acquisition for the expansion of the runway,” Sivankutty said.