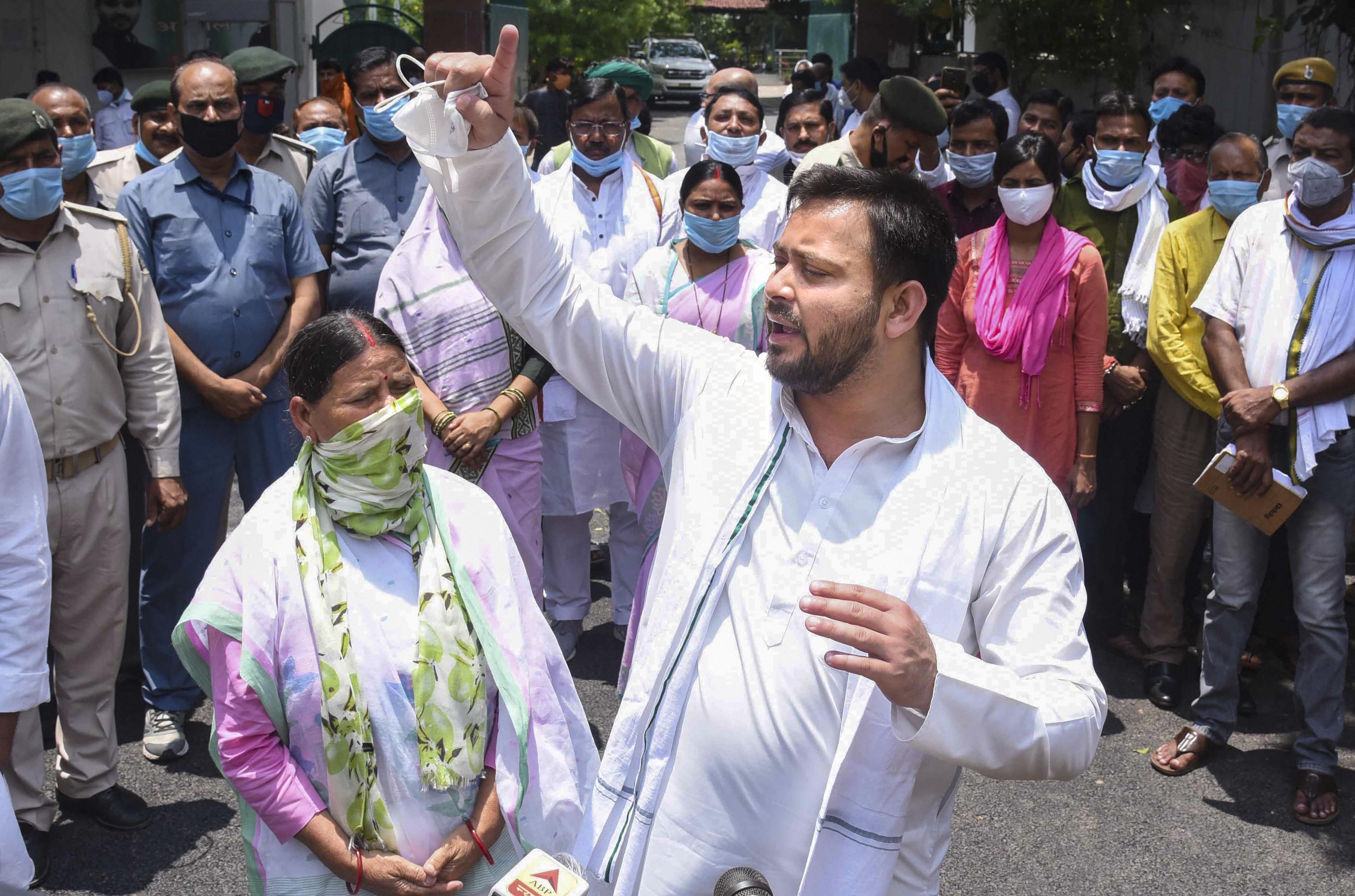 Hours before Union home minister Amit Shahs virtual rally in Bihar on Sunday, RJD leaders and workers staged protests, beating utensils and blowing conches against what their leader Tejashwi Yadav dubbed as the ruling party's celebration of the devastation caused by Covid-19 and the lockdown.

A large crowd gathered outside the 10, Circular Road, residence of former Bihar chief minister Rabri Devi, where she stood alongside Tejashwi and her elder son Tej Pratap Yadav and party workers -- all clanging steel plates with spoons-- while standing inside circles drawn on the ground to ensure social distancing.

Huge police contingents were deployed at the protest site, a stones throw from the official residence of chief minister Nitish Kumar, and also the house of state health minister Mangal Pandey, a senior BJP leader who has been drawing flak from the Opposition for alleged poor handling of the pandemic.

The deafening sound of utensils clanging together and blowing of conches, reverberated through various parts of the state.

'They (the JD(U)-BJP government) are celebrating the devastation caused by Covid and the lockdown,' Tejashwi Yadav alleged in his brief interaction with media during the protest, referring to Shah's rally scheduled later in the day.

No untoward incidents or skirmishes between the Opposition party supporters or police were reported from anywhere.

Tejashwi Yadav accused the Nitish Kumar government of treating migrant workers as second class citizens and raked up the withdrawn circular by police headquarters voicing apprehension that the return of a large number of jobless labourers could pose a law and order problem.

'The government is treating the poor people of Bihar like 'goonda and lootera',' the younger son of RJD supremo Lalu Prasad, who has already been declared the party's chief ministerial face for the Assembly election due in October- November, said.

He also took a swipe at Shah's digital rally when the state and the country were ravaged by the pandemic.

The ruling dispensation could have used digital technology for providing relief to the millions of poor affected by the calamity. But that seems to be none of its concern. The digital rally is an obvious indication that they are merely interested in pursuing their hunger for power, he said.

Yadav said the protest was aimed at ensuring that the poor, who have been hit the hardest by the pandemic, got their due.

There was no representation of RJD allies, including the Congress, former Union minister Upendra Kushwaha's RLSP, former chief minister Jitan Ram Manjhi's HAM or VIP at the protest.