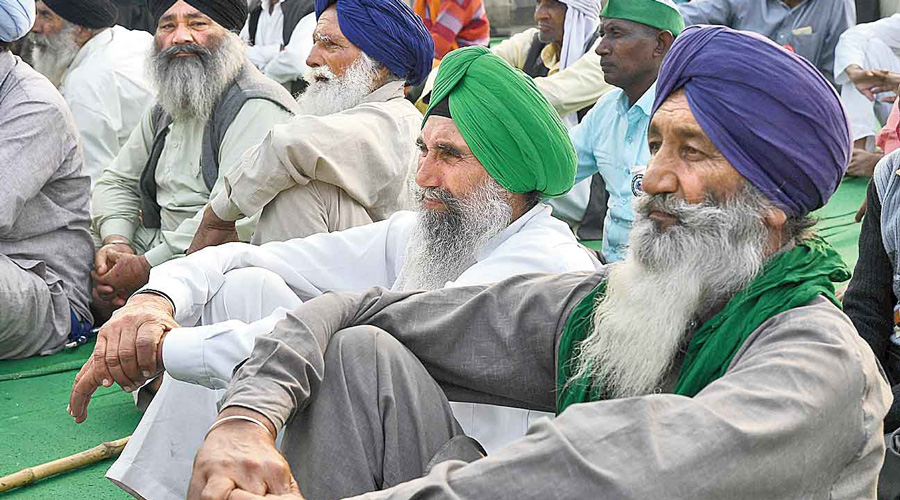 Gangster turned activist Lakha Sidhana, wanted in the violence during the farmers’ tractor rally in Delhi on Republic Day, surfaced at Mehraj, the ancestral village of Punjab chief minister Amarinder Singh in Bhatinda district, on Tuesday for a rally he had called through social media platforms.

Accompanied by private bodyguards, Sidhana — also a native of Bhatinda — addressed the rally before leaving on a motorcycle within an hour with supporters and locals throwing a human wall around him to prevent any attempt by police to arrest him.

While it is the Delhi police which has put out a lookout notice for him, Sidhana warned that the chief minister would have a lot of explaining to do if Punjab police assisted the capital’s cops in arresting anyone booked for the incidents of January 26.

Delhi police, which had announced a Rs 1 lakh award for information on his whereabouts, did not comment on Sidhana’s appearance or respond to queries on whether they had requested Punjab police to nab him when he visited Mehraj. Tuesday’s rally had been announced by Sidhana himself in a video released on Saturday, giving the police advance notice.

Addressing the rally, Sidhana urged people to gherao Delhi police if they came to arrest anyone for the Republic Day chaos. Given that the Samyukta Kisan Morcha, which is spearheading the farmers’ movement — did not allow him to use their stage even prior to the incidents of Republic Day, Sidhana said he and his followers would not allow any of the farmers at Tikri, Singhu or Ghazipur to be arrested even if the SKM did not support him.

The SKM did not officially comment on Sidhana, not even on his announcement of support for the movement. Union leaders privately pointed out that they could not stop anyone from supporting the movement but maintained that the SKM had always kept the likes of Deep Sidhu, the actor-activist who was sent to 14 days’ judicial custody on Tuesday, and Sidhana at an arm’s length.

The SKM leaders said they suspected that Sidhu and Sidhana were agents of the State. That suspicion has intensified after what happened on Republic Day, which the SKM had publicly acknowledged had damaged the movement momentarily.

The protesting farmers at the three protest sites around Delhi, at Tikri, Singhu and Ghazipur, observed the day as Pagdi Sambhal Divas to mark the 140th birth anniversary of revolutionary freedom fighter Bhagat Singh’s uncle Sardar Ajit Singh. Sardar Ajit Singh had led the Pagdi Sambhal Jatta movement for the rights of peasants over 100 years ago.

Bhagat Singh’s family members joined the protesting farmers at the Singhu border where his nephew Abhay Sandhu announced that he would go on a fast unto death if the farmers’ demands for repeal of the three farm laws and enactment of a legal guarantee for minimum support price were not met by March 23, the martyrdom day of his uncle.