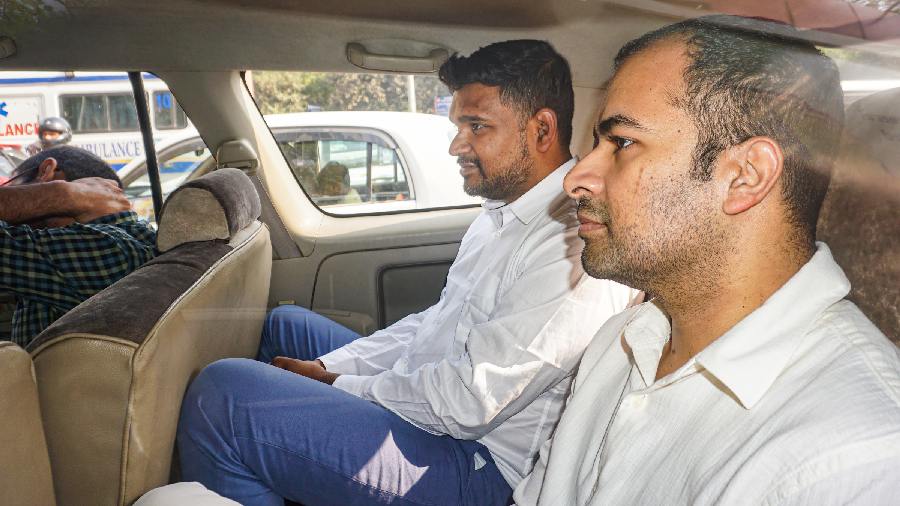 Documentary evidence available with agencies, probing the alleged irregularities and bribes in the scrapped Delhi excise policy, is "scanty" as the accused communicated over VoIP and messenger service Signal while some WhatsApp chats were deleted, the ED informed a local court Saturday.

The federal probe agency said this while it produced Aam Aadmi Party (AAP) communication in-charge Vijay Nair and Hyderabad-based businessman Abhishek Boinpally before the court on the expiry of their 5 day custody.

The court sent them to further 5 days of ED custody on Saturday.

The two were arrested by the Enforcement Directorate early this week in connection with its money laundering probe linked to the now-scrapped Delhi excise policy. The two, however, have been granted bail in the primary CBI case related to the excise policy.

A total of five people have been arrested by the ED in this case till now.

The agency claimed that Nair was the "main conspirator in the entire Delhi excise policy scam".

One of the "biggest cartels" was that of Pernod Ricard, Indospirits and 9 retail zones..., it said.

The ED said Nair was the "main decision maker" of the policy and he was meeting "everybody" from the liquor industry at both wholesale and retail level.

"It is revealed during the investigation that the excise policy was formulated with 12 per cent profit margin for L1 wholesaler. Out of this 12 per cent, 6 per cent was earmarked as kickback," the ED said.

Nair, it alleged, got into "an arrangement" with Abhishek Boinpally for a "bribe" of Rs 100 crore to Vijay Nair in advance, and they were supposed to recoup this money through Indospirits (company of another arrested accused Sameer Mahandru) as wholesaler and web of multiple retail zones in their cartel." "To take out the kickbacks from another wholesaler, system of credit notes was used to get the cash out of the system," the ED said.

Presenting some WhatsApp chats and digital evidences to the court, the ED said "huge evidences have been destroyed due to which the evidences available with the investigating agencies are scanty." "One of the evidence of deletion of evidence is that the policy document shared by Benoy Babu (Pernod Ricard executive arrested in this case) on WhatsApp to another employee of Pernod Ricard is not available on Benoy Babu's phone whereas the same is available on the phone of the person to whom it was sent." "The dearth of documentary evidences is also attributed to the fact that the people involved in the scam used to communicate over VoIP including Signal," the agency informed the court.

The agency alleged Nair introduced himself to certain people in the liquor business as an "OSD to Delhi Excise Department" even though he was just a volunteer worker in-charge of media and communication for the AAP and was never attached with the excise department in any capacity.

It said Nair was "staying" in the government accomodation alloted to Delhi Transport Minister Kailash Gehlot located in the Civil Lines area of the national capital while the latter was living in a house in Najafgarh area of noth-west Delhi.

The agency said the policy that went public on July 5 last year was available with certain liquor traders about a month in advance and employees of some liquor manufacturers were "in contact" with Nair, who it said, "arm twisted" certain businessmen for alleged favours under the excise policy.  The agency has earlier said that three dozen VIPs, including Deputy Chief Minister Manish Sisodia, changed as many as 140 mobile phones with the intention to destroy digital evidence.

It had said several people questioned by it during the course of investigation "have revealed that bribe to the time of Rs 100 crore had been given in advance for undue benefits to select business groups to operate in the Delhi excise policy 2021-22." The agency said it has so far undertaken 169 search operations in this case, filed after taking cognisance of a CBI FIR which was registered on the recommendation of the Delhi lieutenant governor.