The BJP’s majority in both the corporations, however, remains intact, with it winning 27.29 per cent of vote share 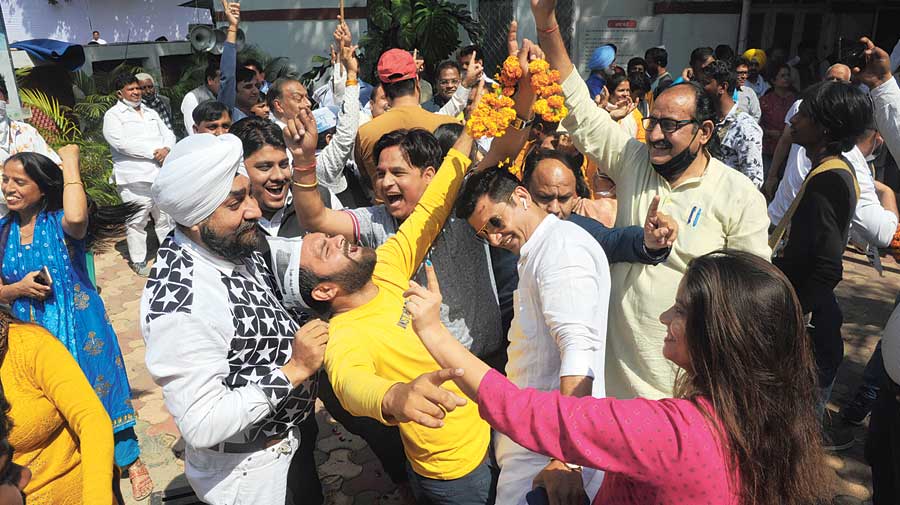 The BJP, which controls the capital’s five municipal bodies, ate humble pie as the results of bypolls to five municipal wards here were declared on Wednesday.

Of the five seats in the North and East Delhi municipal corporations, the Aam Aadmi Party (AAP) won four, and the Congress one.

The BJP’s majority in both the corporations, however, remains intact. The party won 27.29 per cent of vote share.

In the 2017 municipal polls here, the AAP had won four of these seats, and the BJP had won a single seat.

The AAP, which heads the territorial government, had focused on these bypolls like Assembly elections and gained a vote share of 46.1 per cent.

The Muslim majority ward is close to the spot where communal riots broke out in February last year that claimed 53 lives. The AAP faced resentment for being a bystander during the clashes and criticism for providing inadequate relief.

The AAP was the runner up while the BJP came third with less than 0.5 per cent of the votes here. The Congress, however, lost its deposits in the rest of the wards where it came third and won 21.84 per cent of votes.

Delhi Pradesh Congress committee president Chaudhary Anil Kumar said: “When people of Delhi faced untold misery, gloom and uncertainty due to the lockdown, the Congress’ support to the farmers’ agitation demanding repeal of the three black laws had turned the tide in favour of the Congress.”

The AAP gained the Shalimar Bagh seat from the BJP in North Delhi Municipal Corporation and retained the rest of its seats.

The bypolls were necessitated by the election of four AAP councillors to the Legislative Assembly last year and the death of BJP councillor Renu Jaju in 2019.

AAP’s national convener and Delhi chief minister Arvind Kejriwal said: “The people of Delhi want to change the Municipal Corporations of Delhi (MCD), they want the MCD to run as effectively as the Delhi government… This is a call for how the results are going to be in the MCD elections 2022.”

The BJP has held the undivided MCD and its three successors since 2007.

Addressing the media on Wednesday, Union minister Prakash Javadekar evaded questions on the results saying, “Those who held the seats already, won the seats.”