77 hours on, child stuck in borewell 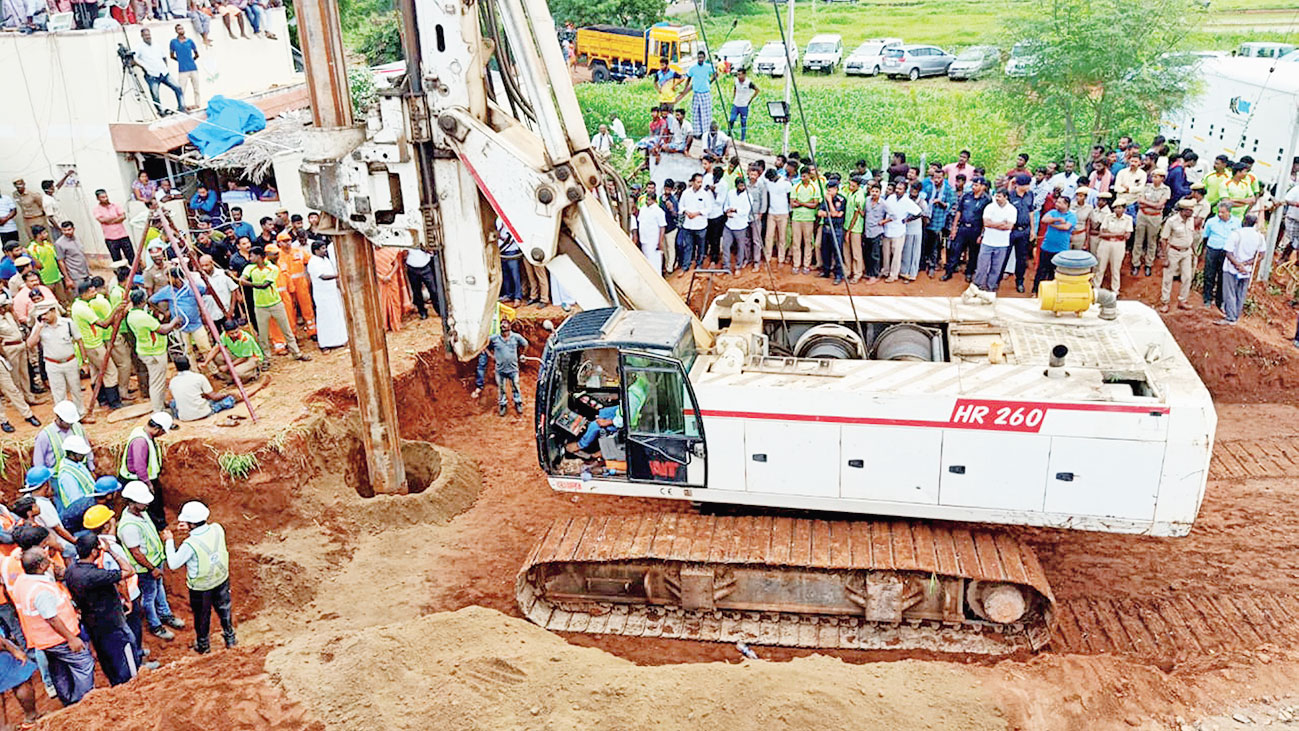 A heavy, German-made drilling machine has been deployed to dig a parallel shaft to reach a three-year-old boy stuck in an abandoned borewell at a depth of 88ft for the past 77 hours, but rocky soil and rain were hobbling rescue efforts, officials said on Monday.

Two Fire and Rescue Services personnel have been lowered into the freshly drilled shaft, using a ladder and with all necessary support like oxygen, for an initial assessment of the condition inside, they said.

“We don’t know the condition of the child right now,” an official said.

As operations stretched into the fourth day, the sleepy village of Nadukattupatti, about 40km from here, teemed with people from neighbouring villages to witness the rescue efforts for the boy who fell into the disused farm borewell while playing near his house at 5.30pm on Friday.

Officials at the site indicated that approximately 50ft of parallel shaft had been dug up and, after reaching the “right depth”, horizontal tunnelling of about six feet was on the cards to reach the trapped child.

Prime Minister Narendra Modi said he spoke to chief minister E.K. Palaniswami about the rescue efforts. “My prayers are with the young and brave Sujith Wilson. Spoke to CM EPSTamilNadu regarding the rescue efforts underway to save Sujith. Every effort is being made to ensure that he is safe,” Modi tweeted.

J. Radhakrishnan, commissioner of revenue administration, said rescuers have been digging the parallel shaft since Sunday to reach an appropriate depth to get to the boy and a heavy Larsen and Toubro drilling machine of German make, equipped with tungsten carbide tipped teeth, had now been deployed to speed up the efforts.

The borewell’s diameter is narrow and the boy is trapped in rocky soil, he told reporters in Nadukattupatti.

Extra care needs to be taken and the drilling cannot be rushed since there are chances of the abandoned borewell getting closed completely because of vibrations, the officer said, adding that this remained a key challenge.

Geologists who were consulted pointed out that the soil comprised hard rock of quartz and feldspar, he said. “Standard operating procedures are (being) followed and we are doing it professionally... based on expert advice.”

Radhakrishnan said monitoring through cameras indicated the child was trapped at a depth of about 88ft and some soil had fallen on him, although it was not clear what his condition was.

The child is in a “stablilised location” and this point of space has been air-locked to prevent the boy from sliding down further. “All technical efforts are in place to try and prevent the soil from getting loosened. The rescue operations will not be called off at any cost. There will be no let-up in the efforts. At the same time we don’t want to give any false hope to the parents of the child,” Radhakrishnan said, adding they were being counselled.

Personnel from the national and state disaster units and fire services are on standby. The location has been covered with tarpaulin sheets in view of occasional mild showers.

Tamil Nadu health minister C. Vijayabaskar and his cabinet colleagues were camping at the site.

Leaders of political parties, including MDMK chief Vaiko and local Congress MP Jothimani, are also at the spot.