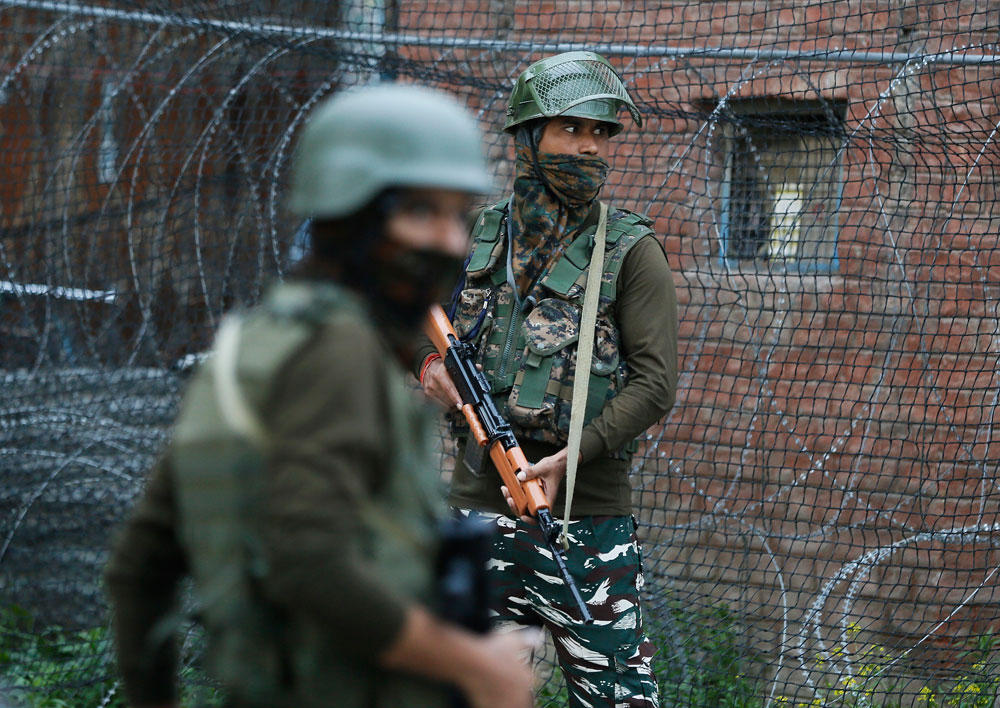 Five CRPF personnel were killed and four others, including a police officer and a girl, were injured in a bullet blitzkrieg by motorcycle-borne militants on a busy road in front of a school in south Kashmir’s Anantnag town on Wednesday afternoon.

One militant was killed in retaliatory fire and a massive search is underway to arrest at least one more terrorist who carried out the attack, which took place hours after governor Satya Pal Malik urged insurgents to give up arms and have lunch with him at Raj Bhavan.

Wednesday’s strike was the first major terror attack after the February 14 Pulwama massacre in which a suicide bomber killed 40 CRPF personnel and brought India and Pakistan to the brink of war.

The latest attack triggered panic in the administration as it took place on the road that is taken by pilgrims to the holy Amarnath cave. The annual pilgrimage is 19 days away.

A CRPF spokesperson said suspected militants riding a bike opened fire on personnel from the 116th battalion and police deployed on law-and-order duties in the town.

He said the attack took place at K.P. Chowk near the General Bus Stand, which is the centre of south Kashmir’s largest town, Anantnag.

The spokesperson said three jawans died on the spot, while two more personnel succumbed to their injuries later. According to him, three other personnel had been admitted to the army’s 92nd Base Hospital in Srinagar.

The injured include Anantnag station house officer Arshad Ahmad, who has suffered a bullet wound in his chest. His condition was stated to be critical.

A girl also suffered bullet injuries and is being treated at a hospital in Anantnag, sources said.

Police sources said the firing continued for around 10 minutes. While one militant was killed and his assault rifle seized, the other is believed to have escaped.

Shopkeepers downed shutters and ran for cover along with hundreds of passers-by.

The militants are suspected to have been fidayeens, or men on a suicide mission. Most fidayeen attacks in the Valley have taken place on security installations, which had prompted the authorities to take steps to secure them.

This time, however, the militants chose a target on the roadside, which could add to the worries of the security establishment.

Another cause for concern was that a defunct militant group, al Umar Mujahideen, has claimed responsibility for the attack. The group used to be led by Srinagar resident Mushtaq Zargar, who is now thought to be based in Pakistan-occupied Kashmir.

Zargar was one of the militants freed by India along with Jaish-e-Mohammed chief Masood Azhar after the 1999 Kandahar plane hijack.

Hours before the attack, governor Malik had addressed a media conference on the completion of a year in office. He claimed that the situation in Kashmir had improved and urged militants to drop weapons and have lunch with him at Raj Bhavan.

“Violence will yield nothing. It is through love that Kashmir can get anything under the Constitution from the Centre,” he told reporters.

The governor urged local militants to “return to the mainstream, give up arms and live a normal life”.