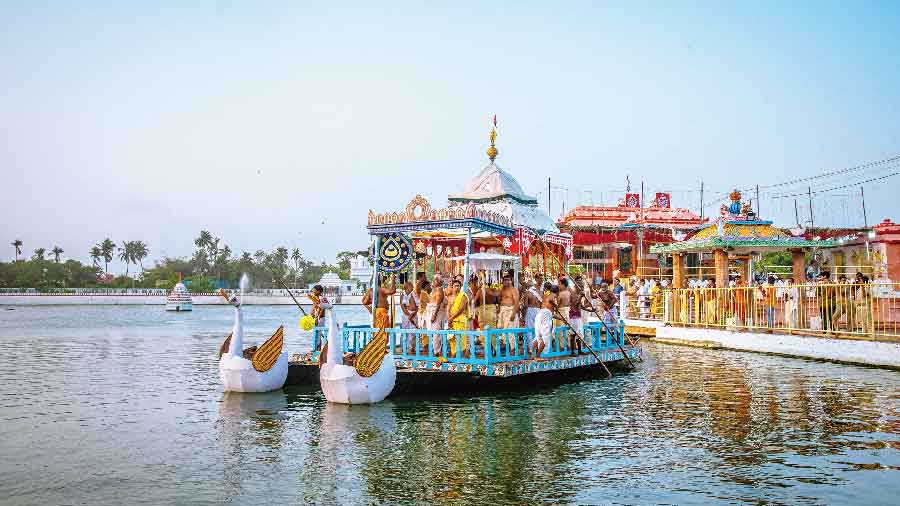 People take different routes to beat the summer. But Lord Jagannath of Puri takes a boat ride followed by a massage with sandalwood paste to beat the heat.

The 21-day-long Chandan Yatra of Puri Shree Jagannath temple, during which the deities enjoy a boat ride in the historic Narendra tank, is going to conclude on Monday.

During the yatra, every day the deities are taken out in a procession from the 12th century shrine to the Narendra tank, which is nearly one km away from the temple, for the ceremonial boat ride. The yatra is extremely popular because of its historic importance. It is also a money-spinner for the temple.

Madanmohan, the deity representing Lord Jagannath, the idols of two goddesses — Sridevi and Bhudevi — and other deities decorated with flowers are taken to the Narendra tank on palanquins by the servitors. The procession starts from the singhadwar (in front of the temple) to the tank amid chanting of hymns, bhajan, kirtan, and beating of mridanga and ghanta which is worth seeing.

“Here, a chapa (a boat decorated with ancient designs) waits for them in the tank. The servitors place the deities in the boat and then go around the tank for over an hour as a ritual to beat the gruelling heat,” said Ramakrishna Das Mohapatra, the senior servitor, adding that the yatra correlates to the water sports and activities performed by the deities of the Puri Shree Jagannath temple during the summer.

He said, “The ritual of the boat ride is named Bahara Chapa and continues for 21 days. It is followed by another ritual of massaging the idols with sandalwood pastes known as Bhitra Chapa. This continues for another 21 days and takes place inside the shrine.”

As per the Puri district police, “The Narendra tank covers an area of over 3.240 hectares (8 acres). It is 834 feet by 873 feet in size. The tank has an island in its middle bearing a small temple, connected with the south bank with a bridge, to which Madanmohan, the representative deity of Jagannath, is brought during the Chandan yatra.”

As all the restrictions related to Covid have almost been withdrawn, a large number of devotees flocked to the pond to witness the famous Chandan yatra.

“We are expecting a large number of devotees around 30 to 40 lakhs during the upcoming nine days Rath Yatra scheduled to begin from July 1. Prior to the Rath Yatra, another important festival is Snana Purnima, a ceremonial bath, scheduled to take place on June 14 during which the lord takes bath with 108 pitchers of water to beat the summer. Following the ritual bath, the lord suffers from fever and goes into hibernation for 14 days. And later he comes out from the temple to give darshan to the devotees — that marks the beginning of Rath Yatra,” said Das Mohapatra.