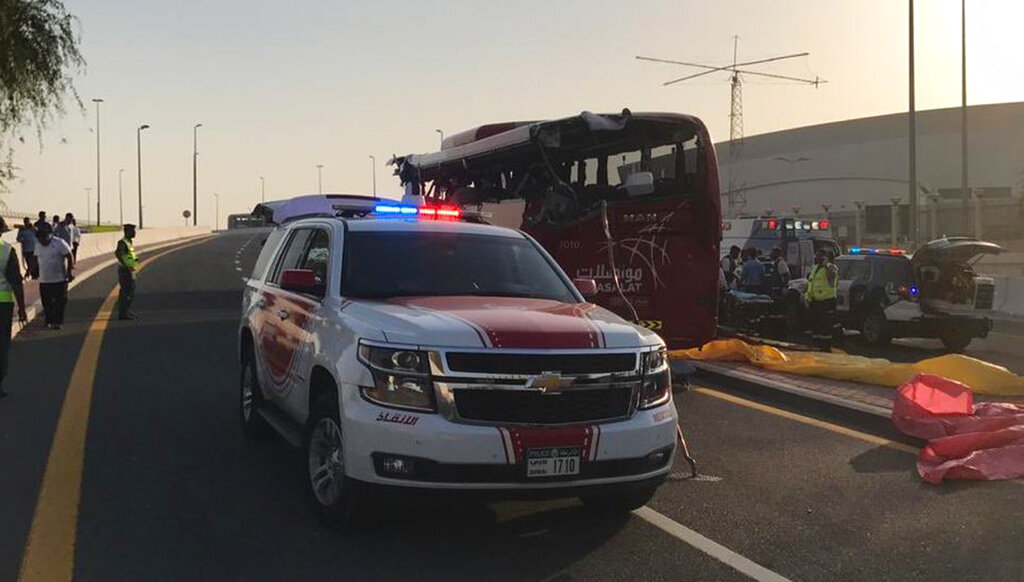 This image released by Dubai Police Headquarters shows the aftermath of the bus crash on Friday, June 7, 2019, in Dubai.The bus, from Oman, smashed into a warning sign coming off a major highway, killing more than a dozen people
(AP Photo)
PTI   |   Dubai   |   Published 09.06.19, 06:03 AM

The mortal remains of 11 Indians killed in a horrific road accident in Dubai were repatriated on Sunday while the body of a 22-year-old Indian was cremated here in the Gulf emirate, an official said.

Twelve Indians were among 17 people killed in Dubai Thursday when a bus, mostly with Eid vacationers coming from Oman, entered a restricted lane and rammed into a low-clearance sign.

The repatriation of 11 Indians was complete when the last three bodies were flown to Mumbai on an Air India flight, the official who was making arrangements for the flights was quoted as saying by the Gulf News.

The flight departed at 3.39am Sunday.

'All mortal remains were moved as scheduled. The procedures were completed by 11.45pm,' he said.

Meanwhile, Roshni Moolchandani, the youngest Indian victim killed in the crash, was cremated here on Saturday at the Jebel Ali crematorium. Her final rites were completed by her family who came over from India, said a social worker, who was assisting the family.

Consul General of India in Dubai Vipul told the paper Saturday that the mortal remains of the Indian victims would be repatriated free of cost by Air India in cases where employers were not bearing expenses.

The consulate had issued travel documents for free and also offered to bear the cost of embalming in cases where the families needed support.

The bus, belonging to the Omani bus transport company Mwasalat, carrying 31 passengers, crashed into a height barrier that cut the left side of the bus and killed passengers sitting on that side.

Dubai Police blamed the Omani driver, who was moderately injured, for the accident, saying 'at times a small mistake or negligence can lead to adverse consequences'.