Advertisement
Home / Entertainment / Watched Blockbuster on Netflix? Here are 6 other workplace comedies to binge on OTT

Watched Blockbuster on Netflix? Here are 6 other workplace comedies to binge on OTT

The rib-tickling sitcoms are available on Netflix, Prime Video and Disney+ Hotstar 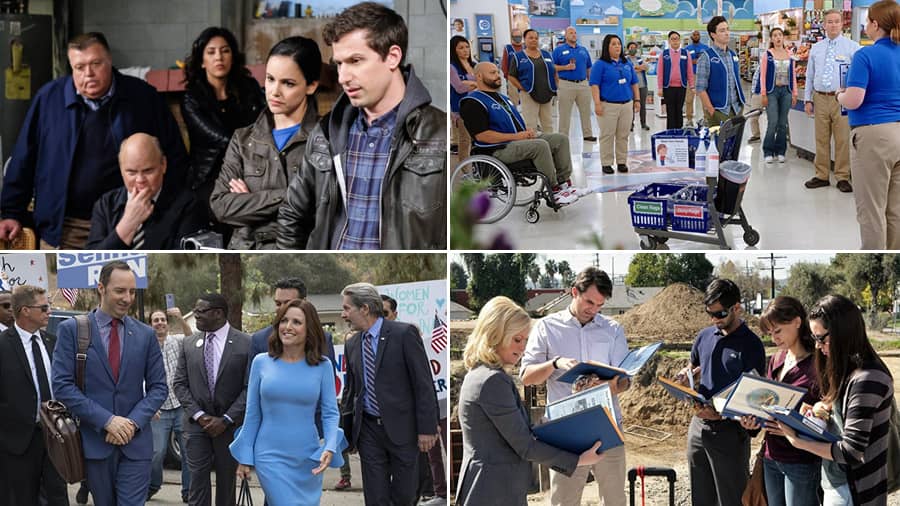 Netflix’s recent workplace comedy Blockbuster, starring Randall Park, Melissa Fumero, Olga Merediz, J.B. Smoove, and Tyler Alvarez, showcases a rental video chain’s struggle for existence in modern America in the guise of quirky romance and funny incidents.  If you liked the show and want to binge on more fun sitcoms set in the office, here are six shows on Netflix, Prime Video and Disney+ Hotstar to tickle your ribs.

Based on the British comedy of the same name, The Office is a mockumentary-style portrayal of office culture at Dunder Mifflin. The makers manage to wring out humour from the most boring tasks at the workplace — you had never known that writing an expense report could turn out to be so funny!

The Office became a perennial favourite of the masses thanks to the over-the-top antics of Michael Scott (Steve Carell), the good boy charm of Jim (John Krasinski) and the am-I-the-only-normal-person-here approach of Pam (Jenna Fischer). Rainn Wilson’s eccentricities as Dwight Schrute was also one of television’s most compelling performances of all time.

Had it not been for the gang at the 99th police precinct in Brooklyn, we’d have no idea that working at a police station could be so maddeningly, frenetically slapstick! Silly jokes, innuendos, interpersonal relationships, social commentary, diversity in cast and characters and the much-loved Halloween heist — the show has it all.

Detectives Jake Peralta (Andy Samberg) and Charles Boyle (Joe Lo Truglio) are the heartbeats of a motley group of detectives at the precinct. From workplace patriarch Captain Raymond Holt (Andre Braugher) to the nerdy Amy (Melissa Fumero), the show is a frolicking ride, which, however, is not complete without Gina (Chelsea Peretti), the over-the-top narcissistic assistant to Holt.

Parks and Recreation tells the story of the employees at the parks department in Pawnee, Indiana. Responsible for the upkeep of the parks in the town, the department is led by Ron Swanson (Nick Offerman) a cynical, egalitarian man who doesn’t like to be involved in any government work. The show is headlined by Amy Poehler as Leslie Knope, an idealistic woman harbouring the dream of running for public office one day. The supporting cast offer the viewers a motley group of memorable and distinctly quippy characters.

Presented in the mockumentary style of The Office, the show satirises the bureaucratic red-tapism and dishes out humour in the absurdist misadventures that Leslie gets herself into.

Superstore is a satirical take on the functioning of various corporate chains. The show has all the right ingredients to cook up a perfect sitcom as it traces will-they-or-won’t-they couple Amy (America Ferrera) and Jonah (Ben Feldman), affable manager Glenn, his no-nonsense assistant Dina and a host of other relatable characters.

The comedy also organically incorporates real-world issues like immigration and the recent pandemic in its plotline, making the show a delectable and contemporary watch.

This British sitcom revolves around two tech geeks — computer programmer Maurice Moss (Richard Ayoade) and work-shy Roy Trenneman (Chris O'Dowd) — working at Reynholm Industries in the IT department. Their new supervisor Jen Barber (Katherine Parkinson) turns out to be a dud in technology..

The show focuses on the bond developing between the three members of the IT team, who work from a dingy basement, in contrast to the stunning London views enjoyed by other employees. The IT Crowd portrays the mundane problems of office life with hare-brained hilarity, drumming up plotlines that border on the absurd.

This political satire gives a ringside view of the office of the vice-president of the US (Veep to be precise). Former senator Selina Meyer gets an opportunity to serve as Veep. She tries to prevent various political uproars and at the same time try to balance her public and private lives.

Julia Louis-Dreyfus slips into the character of Selina with ease, bringing to life the shenanigans of the self-obsessed politico. The daily struggles of her staff to keep up with the antics of Selina and her misadventures make for perfect TV binge.