Triumphant night for women in music

H.E.R. won Song of the Year for ‘I Can’t Breathe’, an anthem for Black Lives Matter 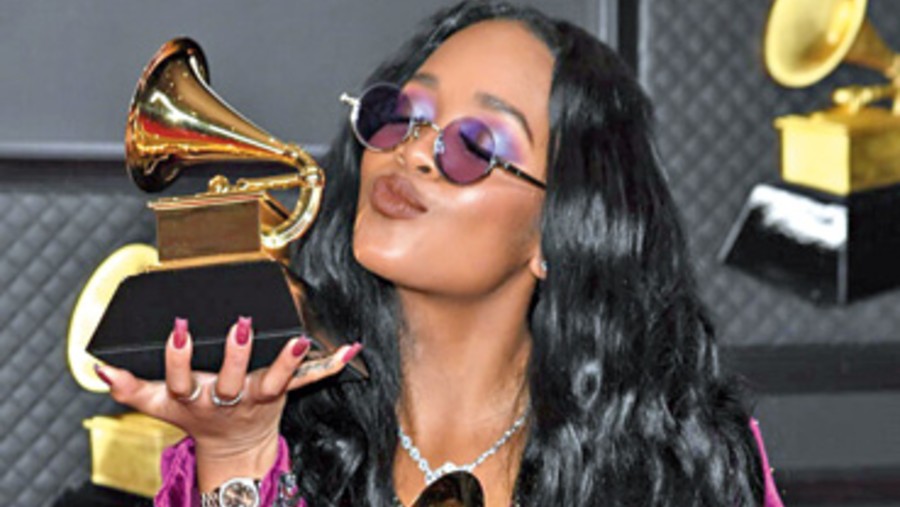 It was a show of togetherness in a Covid-restrained world, despite creating some fractures in the music community when the nominations were announced. On the one hand we had a cascade of performances from the likes of Dua Lipa, Taylor Swift, Haim, Harry Styles, BTS and Billie Eilish while on the other was an anti-Grammys chorus, led by artistes like The Weeknd, Zayn and Drake to the point that the first critic on the list has said that he will boycott the awards going forward.

But the bigger picture of the 63rd Annual Grammy Awards is that of a triumphant night for women in music, with many of them taking home the top awards. Pop deity Beyonce won four awards, bringing her lifetime total to 28 Grammys, which is more than any other woman while equaling the total for the super-producer Quincy Jones. Taylor Swift too made history when she won Album of the Year for Folklore, which she made entirely in quarantine. She has become the first woman to win this particular award three times.

For 19-year-old Billie Eilish, who swept the awards last year, it was Record of the Year for Everything I Wanted. Another hurrah for she power arrived when Megan Thee Stallion, the Houston rapper who described her young ambition as to become “the rap Beyonce,” took Best New Artiste while her song Savage — featuring Beyonce as a guest — won for Best Rap Performance and Best Rap Song.

A pleasant surprise was in store when H.E.R. won Song of the Year for I Can’t Breathe, an anthem for Black Lives Matter, with lines like Stripped of bloodlines, whipped and confined/This is the American pride. There was also a nine-year-old winner, Beyonce’s daughter Blue Ivy Carter took home a Grammy for Best Music Video for Brown Skin Girl (which she won with her mother and WizKid).

Giving the Grammys a different look is its new executive producer Ben Winston, 39, who is best known for turning James Corden’s Carpool Karaoke series. He is the first new producer since Ken Ehrlich took over the show in 1980. The point raised by The Weeknd and the likes found an indirect reply from the interim Grammys president, Harvey Mason Jr, who promised a renewed diversity effort and calling on artistes to “work with us, not against us”.