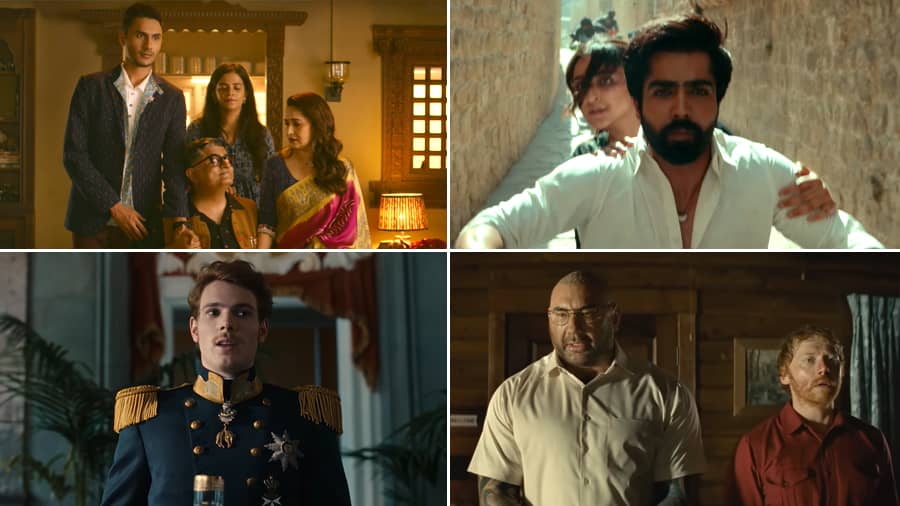 Madhuri Dixit is shown as a middle-class Gujarati woman in the almost three-minute-long trailer. Her son (Ritwik) is about to get married to the daughter of a wealthy NRI. However, the wedding gets cancelled after some video clips of the character played by Madhuri becomes viral.

The movie is helmed by Anand Tiwari, who previously directed Love Per Square Foot, Bandish Bandits and Bang Baja Baraat.

Maja Ma will arrive on Amazon Prime Video on October 6.

The teaser for Parineeti Chopra and Harrdy Sandhu’s upcoming espionage thriller Code Name: Tiranga has been released by T-Series. The film is directed by Ribhu Dasgupta, who previously helmed Netflix’s spy series Bard of Blood.

The short teaser opens with a shot of a military helicopter flying over the hilly terrains of Afghanistan. We also see some other scenic landscapes before we get introduced to Parineeti’s character, who kicks, slams and punches. We also see a brief shot of Harrdy Sandhu. The film also features Rajit Kapur, Dibyendu Bhattacharaya, Shishir Sharma and Sharad Kelkar.

After exploring the lives of the Windsors, Netflix has dropped the trailer of its upcoming royal drama series The Empress, which will portray the exploits of the royal family of Austria. Created by Katharina Eyssen, the show is billed as a dazzling reimagining of the courtship between one of Europe’s most iconic and beloved couples: Sisi and Franz of Austria.

The synopsis reads, “In an incredible twist of fate and against all expectations, an unusual love ignites between Emperor Franz (Philip Froissant) and Elisabeth (Devrim Lingnau). Together they embark on a dangerous path. Surrounded by power struggles and intrigues, Elisabeth confronts those who do not believe in her.”

The Empress will begin her reign on Netflix from September 29.

Knock at the Cabin

The eerie trailer shows us the fate of a young girl and her two fathers on a vacation. All of them are taken hostage by four armed strangers who demand that the family make an unthinkable choice to avert the apocalypse. With limited access to the outside world, the family must act before all is lost.

Knock at The Cabin will hit the cinemas on February 3, 2023.