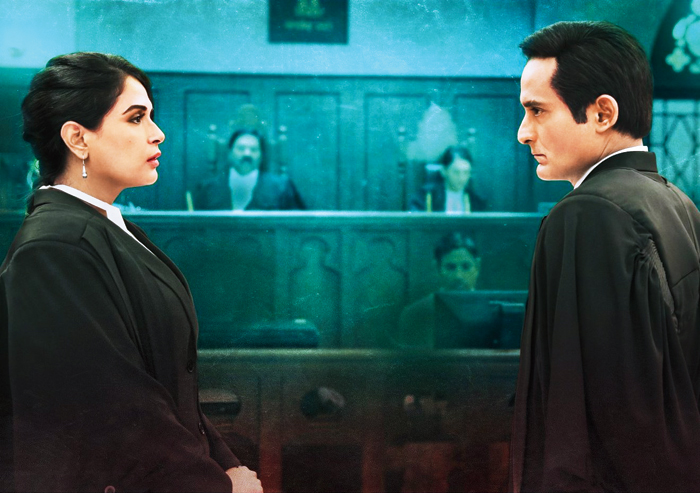 It seeks to question (if not challenge) the idea of ‘No means no’ — and insinuates that gender alone shouldn’t be a measure to brand one as the oppressor and the other as the oppressed.
Movie poster
Priyanka Roy   |   Published 16.09.19, 03:34 PM

Law is not justice. Justice is an ideal. Law is a tool to get to that ideal… sometimes”. Section 375, that released last Friday, is a powerful and relevant film that attempts to distinguish — often, rather disturbingly —between law and justice and examines what separates will and consent. It seeks to question (if not challenge) the idea of ‘No means no’ — which crept into our vocabulary after Pink, a film that also made us rethink our notions of will and consent — and insinuates that gender alone shouldn’t be a measure to brand one as the oppressor and the other as the oppressed. The film makes a couple of strong statements, all of which one may not agree with. It casts a critical eye on the alleged “misuse” of rape laws and questions whether the judiciary is being myopic — “‘one size fits all’ is not the way justice is delivered,” a key character says at some point during the course of the film — when it comes to cases of sexual abuse.

Despite its efforts to present a balanced perspective, “not all men” is the narrative that Section 375 seems to lean towards. It’s tough to dissociate the film from its time and space — it comes a year after the #MeToo movement gained momentum, but is now gradually petering out, with the onus lying on the victims to present “proof” and the accusers easing themselves back seamlessly into public life. In a movement where victims showed tremendous guts in coming forth and naming their oppressors, it’s ironic that one of the first films to have come out of Bollywood — one of the many industries where sexual abuse propelled by power and privilege dynamics is rampant — chooses to highlight the ambiguity of the claims rather than focus on encouraging more women to speak up. It may not spell out succinctly who is right and who is wrong, but it does imply at the end that sometimes in such cases, “law is served but justice may have been denied”.

Section 375 unfolds almost wholly as a courtroom drama, with legal eagle Tarun Saluja (Akshaye Khanna) locking horns with greenhorn Hiral Gandhi (Richa Chadha). Saluja, whose smug smile is often accompanied by lines like “Never fall in love with the law… it’s a jealous mistress” and “Justice is abstract, law is a fact” is defending film director Rohan Khurana (Rahul Bhat, who perfects the hangdog expression throughout) who has been accused of raping Anjali (Meera Chopra, good screen presence but little else), a costume assistant working on his film. With prima facie evidence piled up against him, Khurana is quickly pronounced guilty by the sessions court. An appeal in the higher court sees the case being reopened with Saluja — who has a reputation for making a meal out of even the most formidable opposition — gradually turning the case on its head, lending a touch of ambiguity and tempering with suspicion even those facets that had earlier seemed etched in stone.

Even if you are divided on what plays out on screen, one cannot deny that Section 375 is an engaging watch, with the thrust and parry in court keeping the interest alive. Akshaye, who has the best lines and delivers the most impactful punches often in deadpan, is in superlative form, investing Saluja with a hardened walk and talk that never allows him to shy away from asking uncomfortable questions. Richa’s Hiral, as compared to Saluja, is a whimpering rival, her feeble attempts to challenge him often being mined for laughs. The performance is a tad laboured, with Hiral coming off as someone who is about to throw in the towel any minute.

Section 375 unfolds without much fuss and with minimal build-up. At every point, the film illustrates the in-depth research — it’s loaded with data and statistics, facts and figures — carried out by director Ajay Bahl and writer Manish Gupta. A touch of authenticity is evident in every frame. There’s no heavy-duty Hindi film-styled dialoguebaazi, with many parts of the film playing out in English. The side players — especially Krutika Desai and Kishore Kadam as the joint judges presiding over the case — are well cast. The pace is brisk, even when the film depicts some scenes from contrasting points of view (the moment of rape is not graphic but manages to be unsettling), depending on who is presenting their side of the story. Some moments, though relevant, will make you shift uncomfortably in your seat, including that scene early on where the victim is asked a host of prickly questions by the medical examiner to establish rape.

Section 375 makes an important case for #MenToo — including illustrating the need for gender-neutralised laws — but in doing so, does some amount of disservice to the millions of women who have been wronged. To imply that women are out to wreak revenge and that the system enables them to, is a prejudiced look at a movement that needs encouragement and not derision and doubt. Yes, it’s tough being a man. But being a woman is way tougher.