Sanah Kapur on Shaandaar and Shahid the ‘overprotective’ brother

Where did t2 meet the newest Kapur — Sanah? In a non-descript flat-turned-office in Versova in Mumbai. Supriya Pathak and Pankaj Kapur’s daughter and Shahid Kapoor’s baby sister has made her debut in Vikas Bahl’s quirky rom com Shaandaar. Sanah, 24, plays Alia Bhatt’s older sister Isha, the one getting married in this destination wedding film. 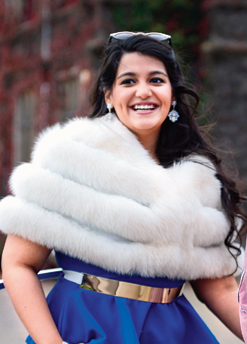 Where did t2 meet the newest Kapur — Sanah? In a non-descript flat-turned-office in Versova in Mumbai. Supriya Pathak and Pankaj Kapur’s daughter and Shahid Kapoor’s baby sister has made her debut in Vikas Bahl’s quirky rom com Shaandaar. Sanah, 24, plays Alia Bhatt’s older sister Isha, the one getting married in this destination wedding film.

When did you know that you wanted to act?

Since I could remember. You know when people start asking, ‘What do you want to be when you grow up?’ I would always say ‘Actress’. When I was three, I would dance to all the songs in front of the TV. When we used to go to watch a film in the theatres, my poor mother would have to carry a bag full of clothes because I would want to dress like the actress in the scene! Ya I was that spoilt when I was a kid.

Does this obsession with all things filmi stem from the fact that your parents are actors?

I am sure that had a role to play. I literally grew up on a set. I was about three or four when my parents launched a production company that made TV shows. My life revolved around school and the set. I have spent nights on their sets. I am more comfortable on a set than even my bedroom! A film set is home for me. Apart from that, movies were what I escaped to when I was going through tough days in school or fights with friends. Watching a film just made me feel so good. For me, movies have the capability to change lives. I want to be a part of films that give happiness and joy to someone.

How did Shaandaar come your way?

Completely out of the blue. My parents were very clear that I have to complete my education before I try my hand at films. So, I was studying literature and psychology at Mithibai College (in Mumbai). The plan was to groom myself for a year before I started meeting people for work. I finished college in June and in July, I got a call from Mukesh Chhabra’s (casting agent for Shaandaar) office. I didn’t know him before. They asked me to audition for a role. I thought, I’ll do it for a lark and to experience how things work. I never expected to be called back. Not that Vikas Sir would have ever hired me because of my family, but I was sure that he shouldn’t know whose daughter or sister I am when he saw the audition.

You are playing a second lead and have put on a lot of weight for this film. Are you worried about being typecast?

Somewhere I think, there is a little bit of fear. I want to prove that it is possible to step away from stereotypes. I hope my performance shows enough range that people can see me as more than a second lead. As for the weight, the decision to put on the kilos was a stressful one for me. I was a chubby kid. It had taken me years to lose the weight. But when you connect as much with a character as I did, it doesn’t really matter.

Who was scarier to work with — your dad or your brother?

Definitely, dad! Brother wasn’t scary at all. Dad is such a brilliant actor and for all of us kids, dad’s appreciation is the best thing ever. Even if I wasn’t his daughter, I’d be scared to share screen space with him. Vikas Sir kept pushing back my reading with dad because he knew I would be nervous. Two days before we were to start shooting in Leeds, he sat us down. When Vikas asked us to start, I went completely cold. I had tears in my eyes and my mind went blank. I was so scared. But somehow, I managed.

What is your relationship with Shahid like? Isn’t there a huge age gap?

Is he mean to the boyfriends?

(Laughs) I try keeping the boyfriends away from him. I don’t give him a chance to meet them!

You have a new family member in Shahid’s wife Mira. What’s she like?

She’s adorable. She keeps Bhaiya on his toes! They make such an amazing pair. Mira and I became friends even before the wedding. We hit it off almost immediately because we are of a similar age and are both interested in literature.

Will Sanah make it big in Bolly? Tell t2@abp.in