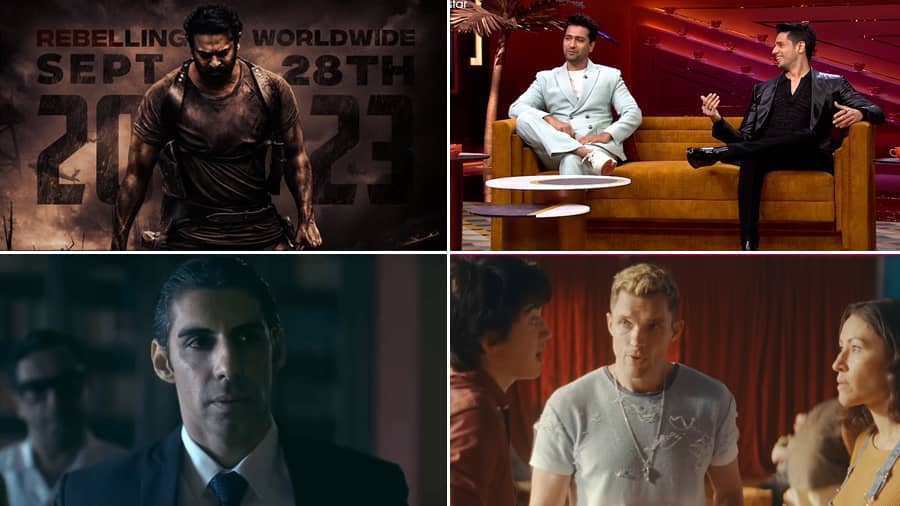 Take a look at the official poster of Prabhas’s upcoming Telugu action film Salaar, directed by Prashanth Neel of KGF fame. The film stars Shruti Haasan as the female lead and Jagapathi Babu in the role of the antagonist.

Prabhas, who became a global star after the super success of SS Rajamouli’s Bahubali, shared the poster of the film along with the release date. Touted as an out-and-out mass action entertainer, Salaar has been shot around the globe.

Sony LIV dropped the teaser of the second season of their hit biographical drama, Rocket Boys, based on the lives and work of scientists Dr Homi J. Bhabha and Dr Vikram Sarabhai. The early life of aerospace scientist and former President of India Dr APJ Abdul Kalam will also be shown in the series.

The 47-second-long teaser gave us some of the key highlights of the upcoming season, which will focus on India’s first nuclear test in Pokhran on May 18, 1974. The series features Made In Heaven actor Jim Sarbh as Dr Bhabha, Paatal Lok actor Ishwak Singh as Dr Sarabhai and Malayalam actor Arjun Radhakrishnan as Dr Kalam.

AR Murugadoss Productions has dropped the teaser of their Tamil-language period drama August 16 1947, starring Gautham Karthik and debutante Revathy in lead roles. The film is written and directed by NS Ponkumar.

August 16 1947 is the tale of a village in Tamil Nadu fighting for freedom from British rule. The one-minute-46-second teaser is high on action, drama and romance.

The trailer presents us with the mysterious death of a young and successful model, and the investigation by a detective (played by Antony) reveals shocking truths.

End of the Road

Netflix released the trailer of its upcoming family road-trip thriller End of the Road starring Queen Latifah, Ludacris and Beau Bridges. The film follows Brenda (Latifah), a jobless mother, who decides to move her family across the country to start a new and better life. However, their plans get interrupted by the shenanigans of a killer.

The two-minute-nine-second-long trailer opens with a fast-paced car chase in the desert, with flashes of a distraught Brenda, before taking viewers back to the chase. The film is directed by Millicent Shelton and will stream on Netflix from September 9.

Karan Johar has shared a teaser for the seventh episode of Koffee with Karan Season 7 featuring Vicky Kaushal and Sidharth Malhotra.

“They’re the men of the moment and they’re bringing the full Punjabi feels to the Koffee couch! Manifesting a spicy brew this time around,” tweeted show host Karan Johar.

They're the men of the moment and they're bringing the full Punjabi feels to the Koffee couch! Manifesting a spicy brew this time around😉

The teaser begins with Karan calling Vicky and Sidharth “two regular Punjabi boys”. Referring to Vicky’s last appearance and his reaction to Katrina’s comments, both Karan and Siddharth tease him.

Karan also tries to dig deep into Sidharth’s personal life by asking, “Now that you are dating Kiara Advani, any future plans?” The Shershaah actor replies, “I am manifesting it today…,” as Karan interrupts him, “That you will marry Kiara Advani?”

Episode 7 of Koffee with Karan Season 7 will stream on August 18 on Disney+ Hotstar.

I Used to be Famous

The official synopsis of the film read: “Vince (Skrein) used to be in the hottest boy band around. Now he’s alone and desperate. An impromptu jam with Stevie (Long), an autistic drummer with an incredible gift for rhythm, sparks an unexpected friendship. Together they form a unique bond through the power of music.”

I Used to be Famous will stream on Netflix from September 16.