The movie is immediately relatable to every woman 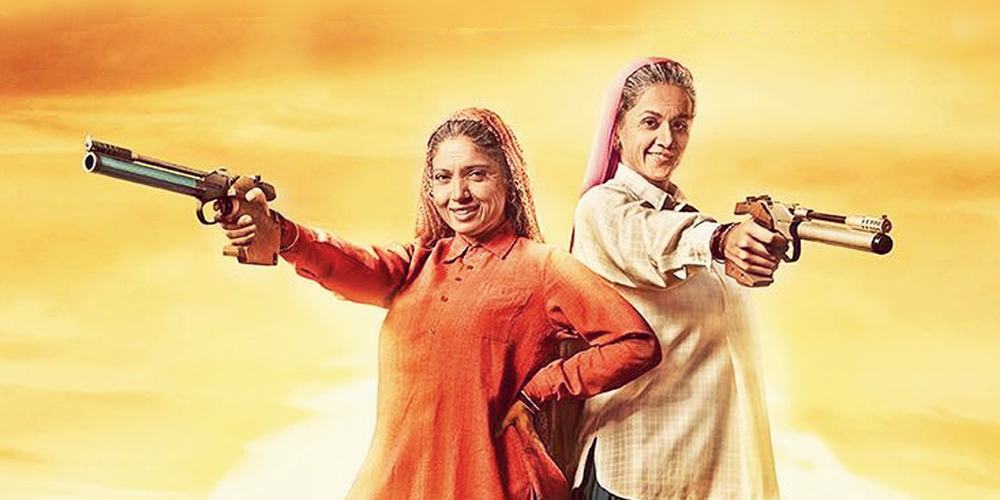 Any comment, leave alone a review, on Saand Ki Aankh would be incomplete without an acknowledgement of how the reel meshes with the real. This film about two sexagenarians bulls-eyeing their way through patriarchy and gender discrimination, suppression and sexism in the oppressed heartland of India is telling in many ways other than the obvious. First, this is a rare film frontlined by two actresses that attempts to bring alive the remarkable life story of two 60-plus village women. It ticks none of the boxes one would expect out of a potential big-ticket Diwali blockbuster, till now the reserve of largely a Khan or a Kumar (the Khiladi has had a biggie on the same Friday, but it does speak a lot when the bigger buzz and better reviews are for the other film. Yes, the times they are a changin’).

Even if judged purely on the basis of merit, Saand Ki Aankh is a well-made film, one that’s emotionally uplifting, inspiring without being overly manipulative and immediately relatable to every woman, irrespective of whether she’s an uneducated labourer in rural Haryana or a high-flying corporate honcho in an upscale metropolis.

“Sharir buddha ho sakta hai, mann buddha nahi hota”. That’s the central idea of Saand Ki Aankh, a line repeated in various settings and situations in the film but hitting home every time. Based on the extraordinary shero story of Chandro and Prakashi Tomar — who spent the first six decades of their lives under their veils, and then scripted an inspiring journey to become the oldest women sharpshooters in the world — Saand Ki Aankh inspires through its messaging, with debutant director Tushar Hiranandani — a bit of an offbeat choice, journeying across the spectrum after penning quite a few sex comedies — always managing to keep it engaging.

That’s in no small measure due to the presence of Taapsee Pannu and Bhumi Pednekar who show tremendous guts and gumption to take on the roles of sisters-in-law Prakashi and Chandro Tomar. Born and brought up in the Haryana heartland, the two are suppressed by extreme patriarchy, reduced to the drudgery of daily life and functioning primarily as baby-producing machines.

Tilling the fields, working in the local brick kiln, holding the family together and, most importantly, keeping their sanity intact, Chandro and Prakashi are sheroes even before they pick up the gun. That happens by chance when they step into a makeshift shooting range set up by local boy Yashpal (Viineet Kumar) and manage to hit bullseye at the first attempt. They repeat the feat every time without fail, and before long, the two find themselves winging off to tourneys and bagging one medal after another, all the while using enterprise and presence of mind to work their way around the egos of the men of the house, particularly orthodox patriarch Ratan Tomar (played by filmmaker Prakash Jha).

What powers them in their journey is the desire to not only shoot their way through many an impediment but also the drive to make the lives of every woman in their village a tad better. They shoot for respect and rights and against everyone who’s heaped insults on them, but also to be acknowledged as individuals not defined by their men.

Saand Ki Aankh may tell the intimate story of the resilience of two women, but it works primarily because of the universality of its emotions. Some scenes are deliberately designed to bring a lump to the throat, especially the pre-climactic moments, and you will invariably find yourself hooting and clapping through many a rousing scene — from the two feisty women shutting up sniggers by winning medals at their first tournament to when they take on the men of the house and teach them a lesson or two on how to appreciate their women better.

What Saand Ki Aankh, co-produced by Anurag Kashyap, compellingly manages to do is subvert stereotypes, all the while using the language of popular cinema. The entry scene, the slo-mo walk, the paisa-vasool lines... they are all there. Some of it veers towards melodrama, but Hiranandani almost always manages to steer it away from getting too cheesy.

A big win for Saand Ki Aankh is that it doesn’t mansplain or angle in a male saviour, something that even a seminal feminist film like Pink was guilty of. This is a film of women, by women and for women... and their men.

A major part of the pre-release conversation around Saand Ki Aankh has debated the wisdom of casting two 30-something actresses in the roles of 60-plus women in an industry already guilty of ageism. The make-up may be cakey for the most part and the predilection to slip out of diction and body language may be quite frequent, but there’s no doubt that Bhumi and Taapsee sink their teeth into their roles with both gusto and grit. While there is very little to choose between them in the emotional scenes, Bhumi is a little more assured when it comes to mastering the accent and the body language. Lending them able support is the vastly underrated Viineet Kumar, while young actor Sara Arjun makes an impression. Prakash Jha is perfectly cast, though the sudden change of heart his character undergoes is unconvincing.

Saand Ki Aankh works because it packs in life lessons but never stops being entertaining. Your heart soars every time the Tomar women hit bullseye, but much more when they shatter a glass ceiling, each time every time. This one sure is Baby, gold, gold, gold....