Anna Netrebko attempts to distance herself from Putin

Anna Netrebko, whose career has been halted due to her Putin ties, has issued a statement against the war 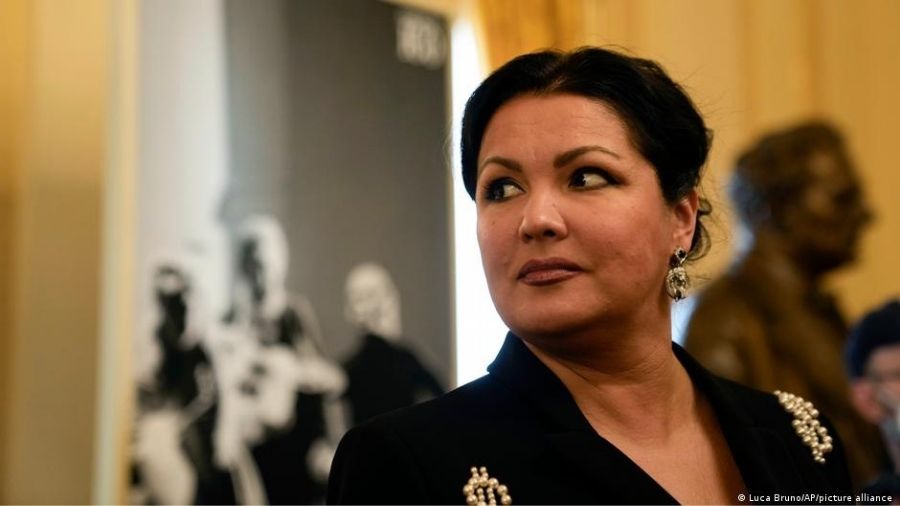 Russian opera diva Anna Netrebko, whose international career has been halted due to her past support of Putin, has issued a statement condemning the war in Ukraine — but observers find it half-hearted.

"I explicitly condemn the war against Ukraine and my thoughts are with the victims of this war and their families," stated Russian opera singer Anna Netrebko through her lawyer on Wednesday. "My position is clear. I am not a member of any political party, nor am I allied with any leader of Russia."

But the statement led critics to wonder, does she really mean it?

She goes on to point out that, "In fact, I have met President Putin only a handful of times in my entire life, mostly at awards ceremonies for my art or at the opening ceremony of the Olympic Games."

It does not mention the fact that Netrebko celebrated her 50th birthday last year with a four-hour gala at the Kremlin. Vladimir Putin was not present, but a government spokesman honored the soprano, saying she was an "open, charming and kind-hearted person with a life-affirming character and a clear position as a citizen."

Netrebko cannot deny that she is close to the Russian power apparatus, because her ties are well-documented.

Russian President Vladimir Putin and the star opera singer have known each other for a long time.

In 2008, she was named "People's Artist of the Russian Federation," an honorary Russian state title. Putin stood beside her during the ceremony, applauding.

In 2012, she supported Putin's presidential campaign.

When Russian soldiers occupied Crimea in 2014 — which the West took note of but did not take seriously — she traveled to the separatist region in eastern Ukraine and had her picture taken with pro-Russian separatist leader Oleg Tsaryov holding the "New Russia" flag. To this day, Netrebko has not distanced herself from that move.

The significance of a ribbon

Accessories are telling, too. In May 2010, after a performance at the Vienna State Opera, Anna Netrebko wore what is known as the St. George ribbon, an orange and black ribbon that was awarded by the tsarist empire for military bravery, reinterpreted after World War II as a sign of victory over Nazi Germany and fascism.

It is still very popular in Russia as a symbol of proud Russian patriots — and banned in Ukraine since 2015. Like the Z symbol, which is now banned in many countries, the St. George ribbon has been part of pro-Russian propaganda since Putin took office.

But how free are Russian artists? Unlike in Western countries, culture and politics cannot be separated in Russia.

That is a legacy from the communist past and hasn't changed to this day: In the Soviet Union, only artists loyal to the regime were allowed on stage. Artists who express criticism, provoke or explore boundaries have a hard time under Putin's rule.

The feminist punk band Pussy Riot used provocative performances to show its commitment to human and civil rights — and its members were arrested in 2012.

Kirill Serebrennikov, a Russian director who has spoken openly about grievances in Russia, clashed with the church and called for an enlightened approach to homosexuality in his productions, was put under house arrest in 2017 before being finally allowed to leave Russia unexpectedly at the beginning of 2022. He was accused of embezzling state funds, charges he always denied.

The artistic director of Moscow's Bolshoi Theater, Vladimir Urin, has spoken out against the Ukraine war, so he too will likely have to leave his post. Indeed, Putin recently offered it to conductor Valery Gergiev, who lost his position at the Munich Philharmonic, as well as several other European performances, for failing to distance himself from Russian politics.

Performances resume in May

Criticizing the regime in Russia can certainly have an impact lives and careers.

No surprise, then, that Netrebko described herself as an "apolitical person" in her first statement on the Ukraine war — a perception that however does not click with her actions.

What is clear, however, is that the singer wants to return to the stage.

On her website, she has announced concerts starting at the end of May, including in Paris, Milan, Vienna, Madrid, Cologne, Frankfurt and Hamburg. According to a Russian online ticket shop, she is also scheduled to perform in Novosibirsk, Russia, in June.

While Hamburg's Elbphilharmonie concert hall wants to open its doors to Anna Netrebko, New York's Metropolitan Opera will continue to ban the soprano for the time being. The Met's general manager, Peter Gelb, was not convinced by the half-hearted distancing.

"We're not prepared to change our position," Gelb said in a statement published by The New York Times, adding, "If Anna demonstrates that she has truly and completely disassociated herself from Putin over the long term, I would be willing to have a conversation."