Mrunal Thakur gets candid about Jersey and more...

There are very few films made that allow us to be better people. Jersey has done that for me, says the actress 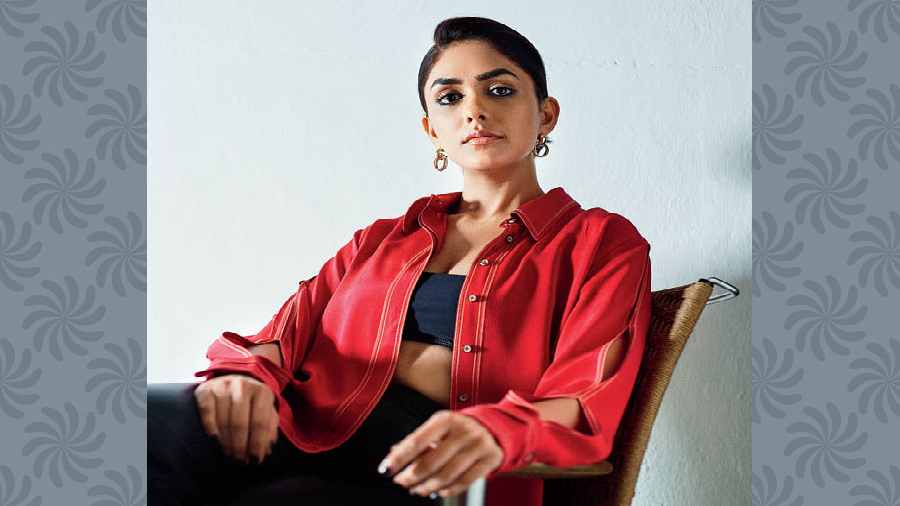 Every interaction with Mrunal Thakur is a delight, given how honest and heartwarming she is. The actor, who has gone from strength to strength with her last few releases, has a biggie coming up. Jersey, co-starring Shahid Kapoor, an adaptation of the Telugu hit of the same name, releases in theatres on April 22. A candid chat with Mrunal on Jersey and more.

Toofaan to Dhamaka, you have had quite a few streaming releases in the last year. Your last big-screen release was Batla House in 2019. What’s it like to have a film release in movie theatres after such a long gap?

Very, very excited for Jersey to come out because it’s a very special film. But I must say that the wait was worth it. I saw the film sometime back and I was really blown away... I feel so proud to be a part of a film like Jersey.

What is it about your role in Jersey that spoke to you? Had you watched the original film before you were offered the part?

I had been offered the part when I was shooting Ghost Stories in Goa and after pack-up, I started watching the original film, that is Jersey in Telugu. I was really tired and I didn’t think I would be able to finish watching the film that night. But I watched the film till 3am and I was smiling and crying at the same time. I felt so blessed that a part like this had reached me.

The last film that changed my life was 3 Idiots and this film moved something within me. When I woke up the next morning, the first thing I said was, ‘I have to be a part of this film’.

The performances by Shraddha (Srinath) and Nani in the original were so mind-blowing. While shooting, I always felt that I hope I am able to do justice to my character in the way it had been done in the original.

Honestly, I did have second thoughts when I was offered Jersey because I was already part of a sports film (Toofaan). But after I watched the original, I realised that the character was nothing like what I was playing in Toofaan.

When we had spoken before Toofaan, you had described your character in that film as, ‘Not just another Bollywood heroine giving support to her man.’ In Jersey, at least from what I have seen in the trailer, your character seems to be someone who is critical, almost cynical, of her man’s ambitions. What was it like playing her?

She’s not like me at all. There are no similarities between Vidya and Mrunal, and that’s what makes playing her more interesting for me. I had to get out of my comfort zone and I had to make sure that there are certain nuances that I had to get absolutely right. When one watches the film, Vidya should feel relatable in some way or the other.

There are very few films made that allow us to be better people. Jersey has done that for me. I felt I had become wiser at the end of making this film. In our films, we always talk about the relationship that the woman in the film has with the leading man. Why don’t we ask the same question to the men? Aren’t they tired of playing husbands and boyfriends? (Laughs)

It was really interesting to play a doctor in Toofaan, a dancer in Super 30, a journalist in Batla House and a reporter in Dhamaka. And now, in Jersey, I am playing a receptionist in a five-star hotel. The film is set in the ’90s and Vidya supports her whole family financially. She is the only breadwinner. It wasn’t an easy part for me to play.... (Pauses) Hey, I am in my car and I just saw the first poster of Jersey! Yay! (Laughs)… I am so excited!

Coming back to Vidya, there are many things about her that I have taken from my mother. The way the women of this generation think is very different from that of women in the ’80s and ’90s. The value of money, the household budget... all these things I have learnt from my mother. So basically, I was just replicating my mom in this film.

I know that you prepare backstories for almost all the characters that you play. Did you have one for Vidya?

Yes! For this one, the very interesting thing that I delved into is how Vidya met Arjun (played by Shahid Kapoor). A girl from Hyderabad who speaks Telugu... how she met Arjun, she first travelled to Delhi and then to Chandigarh and settles there. She must have first met Arjun at a cricket match, and she fell in love. At the back of my mind, I also had Sachin Tendulkar and his wife’s (Anjali) love story... how they met at the airport and how their romance began....

What were your biggest learnings from working with Shahid?

Observation and absorption. He taught me the importance of observing things on set. Shahid is very focused and gets into the skin of every character he plays... we all know that. He makes every character his own, and that I learnt from him.

I was also so blessed to have Pankajji (Kapur) as a co-star. He entered the set as if it was his first day as an actor and he would just surrender himself to the director. Every take he gave was different, he modulated his voice differently.... Acting is give and take. Sometimes, you need to communicate with your co-star only through your eyes. There are so many unsaid things during a take that you, as an actor, need to be alert enough to be able to pick up, absorb and then perform.

There have been a slew of big-budget films for you over the last few years. The good thing is that your parts have been meaty and meaningful and you have stood out even in an ensemble. What’s the way forward for you?

The kind of roles that have been offered to me in the last two years have been amazing. I have films that I am frontlining. I think film-makers have started to trust me and when that happens, then as an actor you feel, ‘Okay, I am ready for this leap.’ There are very interesting scripts being offered to me now.

Mrunal with Shahid Kapoor in Jersey, releasing in theatres on April 22

Taking off from how excited you just got after spotting the first poster of Jersey, do you remember what the emotions were like when your first-ever poster/ hoarding went up?

When the hoarding of my first television show went up, my father flew in from Kerala to stand under the hoarding and take a picture (smiles). That was so special. We took out our car and literally went hunting ki posters kahan lage hain (laughs). The first one is always special... just seeing yourself on that hoarding and knowing that millions of people will see it every day. You are in the centre of the city... that feeling is just marvellous.

You have always been refreshingly upfront and honest, which is also reflected in your social media. That’s obviously a good thing but how much does it also hurt your chances in an industry where the majority believe in keeping silent and being diplomatic?

I was once told by a very senior actress, ‘Itni honest mat bann... phasegi (laughs).’ I kind of agree with her. People ask me for my opinion and when I share it, they have a problem with it. So it’s really as good as not being asked. I always speak for myself. I am not hesitant to say what I like and what I don’t like and once I say it, I move on. I would rather not spend energy on the things I don’t like... I might as well do things which I am fond of.

Everyone is so quick to judge everyone else. If someone is comfortable wearing something, who are we to judge them? I remember when I first came to Bombay, I saw a plus-sized woman wearing denims and a crop top. She was so comfortable, but everyone around her was trying to make her feel uncomfortable.

There are so many people who don’t come out of their homes because they are uncomfortable with their bodies. I struggled with acne as a teenager and when I posted about it on social media, I got so many DMs from young girls who were so happy that I was one of them.