There is fun and there is froth, but it is also severely intense and personal - Imtiaz Ali looks forward to Tamasha, rewinds to Rockstar and Highway, and decodes the 'Imtiaz Ali template', over a cup of tea on Park Street with t2 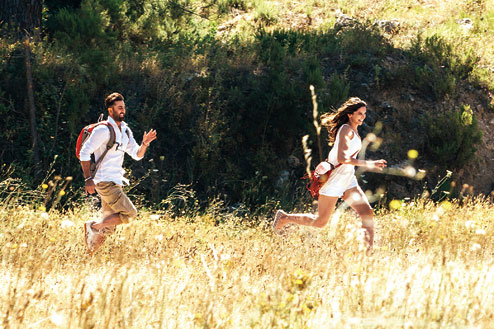 There are like a dozen girls, mostly from Loreto House, standing outside Au Bon Pain and peeking through the corner glass wall of Flurys in sheer glee. Their object of attention: Imtiaz Ali. Enjoying his cup of Darjeeling tea and a strawberry cube pastry at the Park Street tea room.

The Highway maker was in town to talk about Teenkahon, the Bengali film he is presenting. But t2 had to ask him a lot more... about Ranbir and Deepika in Tamasha, about how he would remake Highway, about why Rockstar still affects him like no other....

What made you present a Bengali film?
It’s a good film. I saw Teenkahon at MAMI (Mumbai Film Festival). It’s reminiscent of the great films of the ’60s from Bengal. I could relate to the characters from the three different stories, even though I am not like any of them. And the film could transport me to the Bengal of three different eras. I spoke to Bauddhayan (Mukherji, director) about it. And two days later, he asked me whether I would like to present it. I said if I can do anything to take the film to more people, it would be great.

What do you find is the essential difference in approach between a Bollywood filmmaker and a regional filmmaker, like say a Bengali filmmaker?
The approach of every individual director in Mumbai is different but largely they are all aware of the market. The amount of money they are dealing with is big and so the responsibility of bringing back the money to the financiers is also a big one. In regional films, there are two types of cinema — one which aspires to be great cinema and the other which caters to the lowest common denominator... jo chaar masale ki chaat banate hain. Someone like Bauddhayan would be burning with desire to make a great film and achieve a status for himself and the film industry, which seems to be lost. The money they are dealing with is usually small. So they can afford to be idiosyncratic and self-absorbed.

Do you sometimes feel like making a movie like that? Not worry about the market and be idiosyncratic and self-absorbed?
Yes. I did that in Highway, for instance. It was not so much about ignoring market demands; it was about privileges. Also, I consider myself quite lucky. My personal interests fall in the centre of the audience of Hindi films. So, what I am interested in, a lot of people will be interested in. The only thing that I have is a certain point of view, which is slightly different. All of the stories that I have made are the stories that I wanted to make. I have never really felt like running away somewhere and making a movie without market pressures.

But you had once told me you would like to alternate between one big mainstream film and one smaller, more personal film...
(Laughs) Yes... I remember. Sometimes you would like to break away from your own standards and end up making something crazy and irresponsible. It’s going to be an experiment which will most probably fail. But if you go there, then you learn a few new things. But then again, it’s too bad of me to take money from people and experiment with that money. So, I wouldn’t do that either. I only commission a film when I believe I have full chances of recovering the money I am borrowing.

The last time we spoke, you had analysed what went wrong with Rockstar. Can you revisit Highway for us?
I have not seen Highway for the longest time. Recently I saw one part of it. (Thinks for the longest time...) Okay, here is something very honest I am going to say. Highway doesn’t affect me as much as Rockstar does. Rockstar is a much more flawed film. It’s defective in a very big way. But there is something very pure and angsty which reaches out. And that connects to me personally. Highway is a superior film in terms of making and if I have to take any of my films to a festival, I would perhaps take Highway. But Rockstar hits me — and hits me more often — than any of my films.

If you were to make Highway again, what would you do differently?
I would make it more harsh. Yes. I had taken a conscious decision to make Highway more viewer-friendly for young girls, like my daughter (Ida). So, I could not include a certain harshness that the film merited. But I believed — and I still do — if Highway is not seen by young girls who are vulnerable, then what’s the point of making the film? So, there was that social responsibility kind of thing.

But I know the film could have been more gritty and more abusive. The abuse which the girl only fears in her mind when she is abducted. Bad language... physical abuse... hitting... and the release from there to another level... to fly away like a bird... that would have been the film. Then there are certain things which are great, though. Like the sequence where she sings first on the terrace and then in the truck and he remembers his mother.

Now it’s Tamasha time! You are still in post-production but what is the feeling you are getting about this one?
Tamasha is multi-dimensional. There is fun and there is frothiness, but it is also severely intense and personal. For the boy’s character, Ranbir and I used to often discuss how Tamasha is more personal and real than Rockstar. The film is tender at times, but it is also very big and hard. It’s so many different things... it’s got these chapters. I would like to look at it like a treasure box. And to balance all the elements just right so that the story comes through nicely has been the big challenge.

How does the plot go?
See, there is the same template...

The Imtiaz Ali template?
(Laughs out loud) Okay, let’s call it the Imtiaz Ali template. Essentially the stories are all the same but you have the power to change the story and end it the way you want it to end. That’s what Tamasha is about. It’s also about how you need to be reminded by a pretty girl on an exotic island about who you are and what you are doing. And then how you knock back and become who you really are.

If the templates of a Jab We Met and a Tamasha sound similar, do you think your characters have changed over the years? Do they have different issues?
Yes, they are changing. They have more dimensions. Ved (Ranbir) and Tara (Deepika) in Tamasha are more real than Aditya (Shahid Kapoor) and Geet (Kareena Kapoor) in Jab We Met. They are also more fun because they are more real. They can go through an entire gamut of emotions in five minutes and they are all genuine.

When someone watches Tamasha do you want him or her to be constantly reminded of Jab We Met? Like a forced sense of deja vu?
No. I try to avoid it but if it is happening organically some times, I let it be. If it is the call of the new movie, I look at it as my inability to move away, more as a human being. Lekin abhi toh yeh hi aa raha hai. So should I damage the film by not having a particular scene and claim that I am such a great director that none of my films have anything in common? Or should I make the film better? I always choose the latter route.

Is your casting also dictated by this?
You know what, I always wanted to cast Deepika in Rockstar. The first time I had met her, many years back, I wanted to cast her in Rockstar. But then I did Love Aaj Kal with her. Now, when Rockstar was finally getting made, I realised there were many scenes which were similar for the girls’ characters in the two movies. That whole conflict of getting married but realising that she is somewhere else in her mind. And there were other scenes also in the second half of Love Aaj Kal which had the same conflict that Heer (Nargis Fakhri) had in Rockstar. So I thought if I cast Deepika again, it would look exactly the same. And the bluff will be called. I even explained it to her. She knows it.

Tamasha then is the first time you are repeating your leads — Ranbir from Rockstar and Deepika from Love Aaj Kal...
Yes. There is more love. There is more friendship. There is more trust in that way. I trust them immensely. Because I have worked with them before. I know I can be blind with what they are saying. They are my friends personally and I love them. And with each other they are extremely disarming as actors. So, in the room, when we are playing the scene out, here are three people sitting on the floor and trying to make the scene better. It’s a very open atmosphere.

Ranbir has had a string of flops going into Tamasha. Did you feel that played on his mind when he was shooting for the film?
It’s true that when you are hit with a movie failing, you do not feel great about it and you have to put in that extra effort to come back to the level of bliss to do a scene properly. Actors go through that. Most of Tamasha’s shooting was over before the release of Bombay Velvet. Ranbir did go through a low, but then he came out of it. He’s not in this for the glamour aspect anyway... so why should he be so affected by the brickbats? But yes, it was a concern that he shouldn’t feel under-confident because this was a very real performance that was needed from him in this film.

And what about the reigning box-office queen Deepika? Has anything changed about her from the Love Aaj Kal days?
Her team has changed. During Love Aaj Kal there was nothing... just make-up and hair. But now there is a big team. And Deepika has been smart enough to have people who can handle things for her while she can remain who she is.
Also, she’s become much more beautiful than before! I think it happens with a lot of south Indian actresses. Look at Rekha and Hema Malini. Deepika has really become more beautiful. I used to tell her every second day on the sets... ‘What’s going on? You’re looking great!’

And the music is again by A.R. Rahman...
Yes, very much. The songs have again been written by Irshad Kamil. It’s the same team from Rockstar and Highway. The music, though, is very different from both the films. A couple of the songs are like the sutradhar of what is happening in the movie. It may not match in mood. Like there is a song called Heer toh badi sad hai, which is shot in Calcutta, where the girl is actually sad but it’s an extremely happy Bhangra song. It’s like a tamasha! (Smiles)

Pratim D. Gupta
I will watch Tamasha because.... Tell t2@abp.in

Tamasha releases November 27. The trailer will be out on September 22