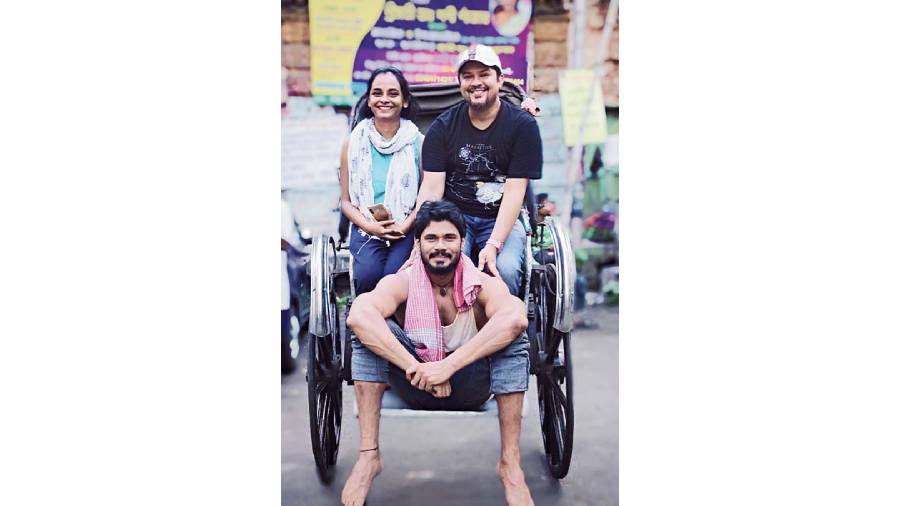 Rickshawala, a 50-minute film that captures the trials and tribulations of its protagonist, who is forced to let his dreams take a back seat as he picks up a hand-pulled rickshaw to support his family when his father falls ill, has just released on the all-new streaming platform Biiggbang Amusement.

The Telegraph chatted with Ram Kamal and Avinash to know more about their film that has already won a host of awards on the international film festival circuit.

Ram, this looks like it was a tough film to make...

We shot it in the bylanes of north Calcutta and there was no place to even park a vanity van. Avinash (Dwivedi, who plays Manoj) was constantly on the road, pulling the rickshaw. Logistically, it was crazy. At times, I would find him sleeping close to the railway tracks!

Avinash, what was the toughest bit — physically and emotionally — to play a rickshaw puller?

Also, I spoke to the rickshaw waala whose rickshaw we used in the film, and he said that mostly he had one meal a day, and sometimes not even that. After that, I lived those five days as a rickshaw puller, and I enjoyed it. One day, I didn’t have a place to change after shoot and I walked into my hotel with my shoot clothes on, and I was actually stopped at the entrance! (Laughs)

Ram Kamal: One day, he was sitting in a corner while the rest of us were planning the frames. An elderly lady went up to him and scolded him, thinking he’s a rickshawwaala and told him to move out of the way!

Ram, what made you want to make this film?

Ram Kamal: My previous films (Cakewalk and Season’s Greetings) were both in Hindi and I was wanting to make a Bangla film. As a maker, I have always believed that you don’t choose the language... your film will choose its language. I was in search of a subject which would suit a Bengali film, and Calcutta is the place where you get to see hand-pulled rickshaws.

Growing up in the city, rickshawwaalas have played a very important role in my life. I have always felt for them. From my balcony, I could see them working in the scorching sun or wading through waterlogged streets. Nothing stops them, and that’s why I feel they embody the spirit of Calcutta. In my film, there are none of the cliched shots of Howrah Bridge or Victoria Memorial. There’s not even a fleeting glimpse of a tram or a yellow taxi.

So the idea of this film was primarily to tell the story of rickshawwaalas. And I have sub-layered that with the story of a homemaker who is trapped in a bad marriage. The film says that the need for sex is not a crime and one should not be judged for it. I don’t think we see or say that enough on our screen.

The film has gone to various festivals abroad and has won quite a few awards. The audiences there love Avinash’s character because they feel that he is not only pulling the rickshaw, he’s also taking forward the narrative. They look at the rickshaw as a metaphor for the film.

What made you pick Avinash?

Ram Kamal: When I was casting, a lot of reputed actors from Calcutta reached out to me for the part. I was getting good actors in them, but somehow I wasn’t getting the body language. Either I was getting a bodybuilder who couldn’t act to save his life, or I was getting an actor who didn’t have the body.

Meanwhile, I was at a party in Bombay and Avinash was there. He was standing at the bar and I felt that this is Manoj’s face and I should ask him. We decided to meet at a coffee shop the next day, but then I saw him wearing Armani and walking out of a BMW and I was like, ‘How will he play a rickshawwaala?!’ (Laughs) I thought it had misfired, but I continued the narration. But at the end of it, I found his voice was choked, he understood the ethos of the film and he gave his inputs. I found that he has his roots deep down in Calcutta and I knew that he would do justice to the part.

Avinash, how did you react when you were approached for a Bangla film?

Avinash: I had heard stories of directors in the ’90s meeting an actor at a party and saying, ‘Tu hi hai mera hero!’ But I never thought it happened in real life! (Laughs) When I met him the next day, I just loved the story. I didn’t know that it was a Bangla film, but when I came to know that it’s a Bihari character, I felt a connection. I am originally from Gorakhpur and when I was born, my father had to go to Calcutta to earn money. I decided that I wanted to live this character once. 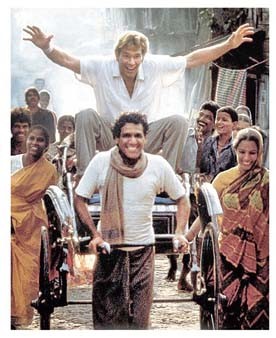 Ram, you have dedicated Rickshawala to Om Puri, who played a rickshaw puller in Roland Joffe’s City of Joy. I believe Om Puri’s wife Nandita has also watched your film...

Ram Kamal: Yes, yes. I wanted to show the film to her because it’s a tribute to Om Puri. I was at her house to show the film. She paused it midway, went inside her bedroom and came back after 10-15 minutes after a box. The box had the bell of a rickshaw, and she told me that Om Puri sahab had worked in so many films, but he had never taken anything from the set of any film... except for this bell which he asked Roland Joffe if he could keep as a memory. Nandita ji told me, ‘While watching Avinash in your film, I could only think of Om Puri ji’. So I already got an award for my film in its very first screening!