And learning new things about herself in the past few months 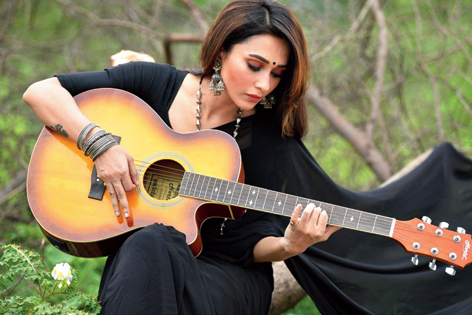 There is a huge emotion attached with Rabindrasangeet. And whenever I wear a sari, people tell me that it reminds them of Pupe (Mimi’s character from the serial Gaaner Oparey). I also had this desire to sing this song one day: Mimi
Sourced by the Telegraph
Arindam Chatterjee   |     |   Published 12.06.20, 12:51 PM

She believes in spreading joy through music, and Mimi Chakraborty’s new song, a rendition of a Tagore song, is a testament to that. On Monday, June 8, Mimi stepped out to shoot the music video for the song Amaro porano jaha chay, becoming the first star from Bengal to shoot outdoor in the first phase of unlocking. The Telegraph chats with the MP-actress-singer...

How and when did the idea to shoot a music video come about?

I started getting a lot of requests from fans to do more songs since Anjana (the first song from Mimi’s album Dreams) came out. They wanted to hear something from me in Bengali. My friends wanted me to do a Rabindrasangeet song... I was also thinking about it. Amaro porano jaha chay is one of my faves. I recorded the song at home since I have the set-up and I sent it to be arranged. The idea for the video shoot came up suddenly.

Why pick a Tagore song?

There is a huge emotion attached with Rabindrasangeet. And whenever I wear a sari, people tell me that it reminds them of Pupe (Mimi’s character from the television serial Gaaner Oparey). I also had this desire to sing this song one day. We are going through such tough times... and as an actor I thought it would be nice to entertain people.

How challenging and tough was it to shoot in Rajarhat?

We shot the video with a team of 10 people... we kept it to a bare minimum. Everyone was continuously sanitising their hands during the shoot. At times the spontaneity was dropping since we had to be very careful about everything, about every movement we made... and then to sanitise everything as we went along. We were concerned. The food was packed and sealed and inside my car. We picked that location because there was no one around. It was completely empty. We shot in the interiors of Rajarhat.

For you it must have been all the more challenging since an actor cannot wear a mask during a shot. How did you do it?

And you have to perform. It is difficult, yes, but at least I was shooting alone, so it was okay. But it’ll be really challenging when you’ll be shooting with other actors around in a studio. Trust will be the only factor then. We don’t know when things will become normal again... but till then we have to survive.

What kind of precautions and safety measures did you take?

We took all the precautions, from having the masks on to using sanitiser sprays to wearing gloves. But when doing my hair, we noticed that hair strands were getting stuck to the gloves. Then Seema had to take out her gloves, wash her hands, sanitise it and then do my hair. I told her to do it once or twice and let it be. I also could not touch it.

You are the first star from Bengal to shoot outdoor after unlocking started...

I did not plan it, it just happened (smiles)! When we got the permission to shoot outdoors, I thought why not. All I knew was that I had to take care of myself and my team. We took all the safety measures.

Did the whole experience take you back to your Gaaner Oparey days?

Yes to some extent, suddenly Gaaner Oparey was back on TV, people were watching it again and they wanted to see Pupe back again!

I have been working for the people, and co-ordinating with the people of my constituency... my work (as an MP) has kept me really busy. However, at the end of the day I don’t have too many people to talk to. I have tea in the evening with my dad, and there are my team members. I miss my mom and siblings, my home in Jalpaiguri... all of them are there together. I really miss them. Also, on the personal front I hope I get back into my fitness routine very soon. I have always tried to heal myself from within. I feel very down sometimes. But I guess this is what everyone is feeling... going through.

Till mid-May I was working out, eating right. But then for some reason I could not work out or do my yoga. I did not eat good. I was reading books but at one point of time could not concentrate on books. I would finish a book and only remember the first few chapters. I am trying to motivate myself and getting back to my old self. One thing that has remained constant is my love for work… my honesty towards work. I have always been very disciplined. I have seen a lot of things in life, and learnt from them.

What are the new things that you have learnt about yourself in the last few months?

I tried to cook, I tried... but I just cannot do it (smiles)! Somewhere I mess it up. I also realised my OCD levels have increased to infinity! The other thing I learnt about myself is that I am a very patient person. I have also become a good house management person... I know the details of various essentials now.

If you look back, how would you sum up the last three months in your life?

It was an experience. We are going through tough times. The meaning of helping each other is paramount. The meaning of family comes to the forefront every time. Many trees were uprooted because of Amphan, so we should take the initiative to plant them back again. It is great to see people feeding stray dogs, taking care of them. People were helping each other and the senior citizens. However, the last three months have also been like a nightmare and I wish it all to go away. I hope that we can go back to normal again.