Hullabaloo or no hullabaloo, don’t mind either: Vijay Deverakonda on Liger nude poster

Last month, Ranveer Singh’s bare-bodied photoshoot for an international magazine had caused a huge controversy and several cases were filed against the star 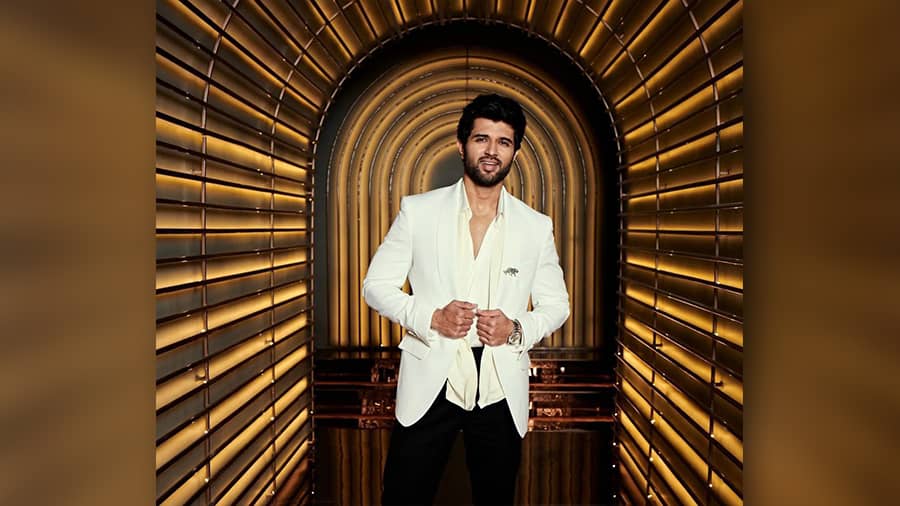 Hullabaloo or no hullabaloo... It's all the same for actor Vijay Deverakonda who went almost nude in a poster for his pan-India film Liger and seems quite unconcerned about the controversy it can lead to.

There were concerns from the Liger team, including producer Karan Johar, but Deverakonda was determined to go ahead with the poster that shows him nude and holding just a bouquet of roses.

“I don’t care if there is hullabaloo or if there is no hullabaloo. I don’t mind either, the star said in an interview when asked if he is glad his poster didn’t land him in trouble in the way that Bollywood star Ranveer Singh found him to be.

Ranveer Singh’s bare-bodied photoshoot for an international magazine had caused a huge controversy last month and several cases were filed against the Bollywood star.

Deverakonda’s poster came out earlier but escaped the same scrutiny.

The Arjun Reddy star said some of the team members, including the film’s producer Karan Johar, were hesitant to release the poster as they found it to be sensitive.

“When the promotions were starting, I felt I wanted to start with this poster. So, I spoke to Karan and everyone, and they were like, ‘Are you sure? Because it is sensitive and people can react. The film is so good that you don’t need to put this out’.

Directed by Puri Jagannadh, Liger stars Deverakonda as an underdog fighter from Mumbai, who competes in an MMA championship.

The idea for the poster came from Deverakonda, who became an overnight star after the success of his 2017 Telugu movie Arjun Reddy.

“I just get some ideas in my head and if I get excited by it, I do it. There is never too much thought into it. So, it was completely my call just that I felt like and I did it. I have a body, so show it,” he added.

According to the actor, the culture of such photoshoots is not new as sportspersons in the West often pose semi-nude for magazines.

“I watch mixed martial arts a lot and I am a big fan of the sport and actively follow it. So, I know how these guys live their lives, how they behave and what they do and stuff.

He further said that he was in the right shape physically and he believed it was apt time to attempt something similar for Liger.

“When I was in fighting shape and we were doing the regular photoshoot for the poster of the movie, I went to my director and producer and said I want to shoot one shot where I am just holding a bunch of flowers because it is a love story. But this guy is a fighter. So, it is a mixture of action and love story. Then they were like okay and said ‘If you want to do it, do it’. We shot it and we kept it. And this was shot like six or eight months ago.

Produced by Puri Jagannadh and Charmme Kaur through their banner Puri Connects and Karan Johar and Apoorva Mehta via Dharma Productions, Liger will be released in theatres on August 25 in Hindi, Telugu, Tamil, Kannada and Malayalam.