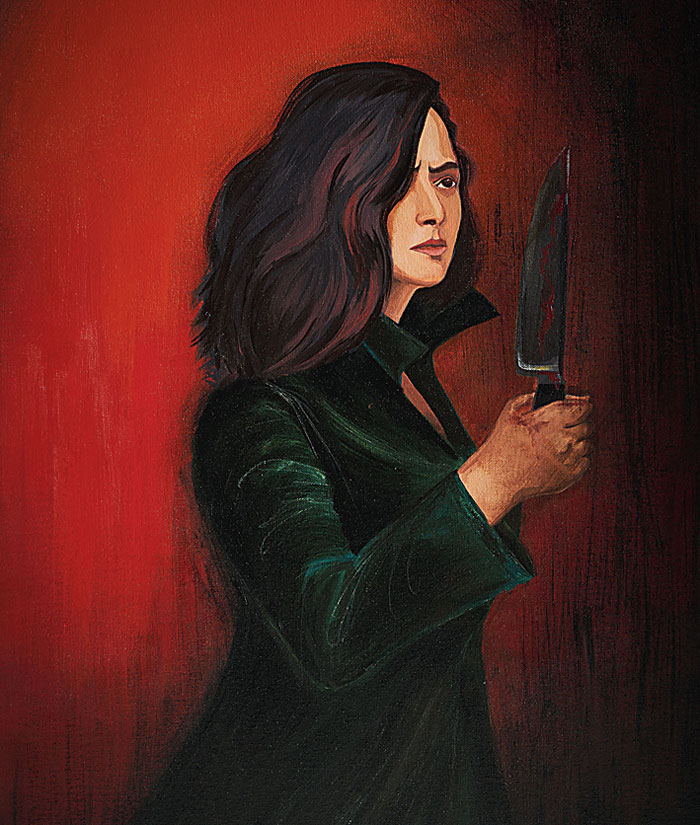 Taken from the ancient Greek tragedy Medea written by Euripides, Ira’s play is based on the myth of Jason and Medea and was first produced in 431 BC.

It starts touring in Mumbai and Bangalore from mid-December.

The plot centres on the actions of Medea, a former princess of the barbarian kingdom of Colchis, and the wife of Jason. She finds her position in the Greek world threatened as Jason leaves her for a Greek princess of Corinth. Medea takes vengeance on Jason by murdering his new wife as well as her own children (two sons) and then escapes to Athens to start a new life.

The Telegraph caught up with Hazel to chat about the play.

The teaser of Euripides’ Medea that you posted on Instagram was quite scary. How difficult was it playing such a dark character?

It is difficult playing a dark character. She’s completely opposite to my own personality, in the sense that she’s egotistical, morally indifferent and remorseless. It is a challenge for me to relate to her but I have met people in my life who’ve had these characteristics, so I tap into my interaction and try to imagine from that perspective.

How was it being directed by debutante Ira Khan?

Ira has really surprised me. She has high expectations from us all and wants everyone to give their best. It’s a classical Greek play, so Ira had given us a lot of context on ancient Greece, the norms of the times, Greek Gods and quizzes us randomly. Personally, I love her working method because I get fully absorbed into the projects I take on, which is why I take so few. She’s incredibly intelligent, wise, and pushes us to extract our best and works doubly hard herself. She’s genuinely inspired me more than I could have ever imagined.

What would you say is the best part of her as a director?

She creates a safe place for an actor to get lost in and find the character. She pushes us to our limits and boundaries as an actor and seems to instinctively know how to get the best out of each of us.

How different is it acting in a play as opposed to facing the camera?

It’s worlds apart. I feel like each great screen actor has come from theatre. Theatre is about how much you prepare for a role. There’s no cuts or edits in a play. It really teaches you how to be in the moment as a person and as an actor and how to improvise when things go astray. Theatre has instant gratification and you know, energetically, when you haven’t done justice to a moment, scene or character. Film has the liberty to reshoot and even reschedule.

How many hours a day did you guys rehearse for?

So far, rehearsals have been intense, from 9am-9pm for some of us! We are doing a traditional Greek play in its traditional ancient Greek form. So it’s a lot more demanding to understand the norms of the time and how ancient Greek plays were. There’s a lot of homework to be done too. It’s not a contemporary version or an interpretation of Medea, it’s clinical and by the book, so I feel there is a lot more work to it.

Was it emotionally exhausting preparing for such a dark character?

Yes, it is. I know I have to go to the darkest places I’ve faced in my life in order to play this character convincingly. I have been trying so hard to relate to her and humanise her, and failing. I think this is where my support and training as a therapist comes in because I understand boundaries as a person and a character and I have been successful in not taking Medea home with me or let her enter into my personal life.

Did you watch the original Greek play to prepare for your role?

Sadly we don’t have the liberty to see too many Greek plays in India. I have seen a version of Medea some years back but I don’t remember much. If an audience watches my performance of Medea and feels negatively towards the character, I’ll know I’ve done a good job. I am to get under people’s skin, and not in a comical way.

Has your husband Yuvraj Singh seen the rehearsals or given you any feedback on your role?

I haven’t told him anything about the play except that my character is very dark and as an actor I’ll need to go into dark places mentally, so will need his love, patience and support to keep me grounded and bring me back to Hazel if need be! He gives me the support and space that allows me to be absorbed by my work and give my best and lovingly welcomes me home at the end of the day. I do the same for him.

What has been your biggest learning from theatre?

How to be an actor. How some mistakes turn out to be the best moments in life. How to hold my space and wait patiently and not to rush through anything. How to live in the moment. How wonderful it feels to make others happy.

What can the audience expect from the play?

To be affected by it. To question life, especially for those who see things as black and white because in reality, life is grey. To question what things are justifiable and to see other perspectives. To question the times we are living in and this issue we face today, and to think about if we have progressed at all from ancient Greek times or not.

Do we get to see you on screen sometime soon?